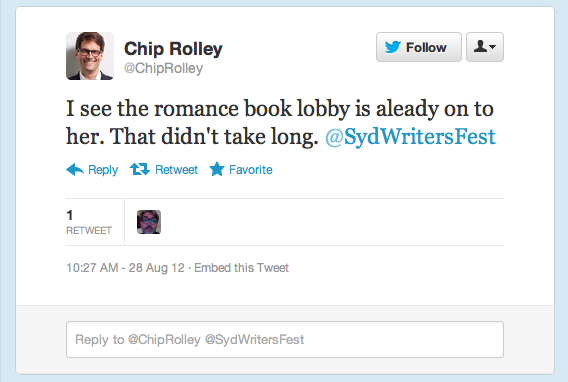 On why the Sydney Writers’ Festival should include romance authors in its program. (Updated to add Chip Rolley’s asshat tweet about the ‘romance lobby’. With screencaps!)

Instead of just whingeing about the lack of romance writers at the Sydney Writers’ Festival, I decided to send a request, via the SWF website, that romance fiction be represented in the 2013 program. I got a brief but very prompt reply to say that my comments have been passed on to the organisers, so I guess we’ll find out next year if anything comes of it.

In any case, here’s what I wrote, and if it’s something you’d also like to see at SWF, I’d encourage you to submit your own letter using the contact form on their website.

Subject: Romance genre should be represented at the SWF

I’m writing to request that the Artistic Director please consider including romance genre authors in the 2013 program.

Australia is home to bestselling authors in the genre, including Stephanie Laurens, Marion Lennox, Keri Arthur, Anne Gracie and Anna Campbell. We also have a significant number of successful Mills and Boon authors, some of whom have been publishing books since the 70s. This year, Fiona Lowe won both the RITA and the RWA awards for her digital-first book Boomerang Bride. (In romance, this would be the equivalent of winning an Oscar and a Logie.)

Sadly, the genre is continually under-represented at mainstream writing festivals despite the large body of work that Australian authors have contributed to the genre and with continual disregard to avid readers of romance fiction. SWF has previously featured authors of books with romantic elements, chicklit, erotica and women’s fiction, but I cannot recall a recent festival that featured authors writing squarely within the genre. This is a deplorable oversight given that the romance market is an area of growth in the book industry, both in terms writing output as well as innovation on the publishing side. Notably, Penguin and Harlequin have recently announced new digital imprints dedicated to romance fiction, and Momentum will be releasing a set of erotic romance titles later this year. At the recent Romance Writers of Australia convention, it was clear that the romance fiction market is one that Australian publishers are keen to exploit.

I would therefore urge you to give writers of romance fiction a voice in the SWF and in a way that demonstrates an appreciation of the genre and an understanding of its constraints and expectations. This is a market dominated by women writers and readers, and I believe that there are many interesting, provocative and unexpected conversations to be had around the books we love to read.

Update: Former SWF Artistic Director Chip Rolley tweeted this shortly after I posted this (and tweeted about it): I’m so glad he was no longer on the job when I sent that letter. Also, Vassiliki made the very valid point that SWF is publicly funded and should therefore be responsive to public demand: And, as she rightly points out in a separate tweet, ARRC and the RWA conference are predominantly funded by members and private sponsors.