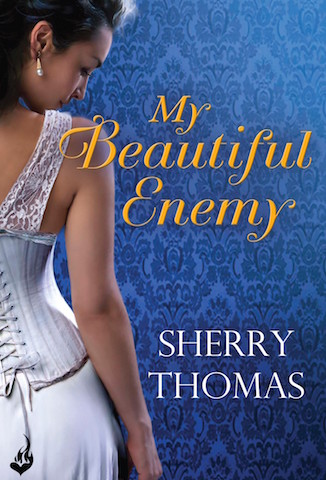 An unusual romance, with a touch of action-packed drama. Sherry Thomas is known for her beautiful prose, and this book is no exception.

The half-English daughter of a Chinese courtsean, Catherine Blade is sent to England by her stepfather, a high-ranking Chinese official, to retrieve two jade tablets. The last person she expects to meet is Leighton Atwood, a former British spy whom she met eight years ago in Chinese Turkestan.

While this book stands alone, I recommend that you also read the prequel, The Hidden Blade, a story of Catherine and Leighton’s childhoods, in which they were in the same place at the same time but never met. It sets the stage for the rest of the story.

A historical epic with flashbacks, Crouching Tiger, Hidden Dragonesque martial arts, My Beautiful Enemy swept me away to a different time and place. (Sigh.) Historical romances with set outside of Europe are unusual enough, but this one had an even more unusual location — Come on, how many romances have you read set in Turkestan? — and a half-Asian character. While I’m not entirely familiar with the customs of that period, the author’s research seems thorough, and Sherry Thomas pays good attention to detail in her rich descriptions of the era. That said, my only other sources of comparison are other novels, Asian history high school classes, and  Chinese TV dramas. (Note to self: Read more on this era!)

I loved this book. There’s more to this story than meets the eye. It could have been just another second-chance romance involving a spy (who is about to be married) and a beautiful woman, but Thomas infuses the story with enough intrigue and grace to keep you wanting more with every page turn. The story, the drama, drew me back again and again, and I have reread this book twice since I first purchased it. (I might have even cried at some point.)