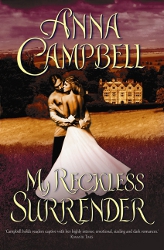 Dramatic, thrilling and, yes, a little over the top—vintage Anna Campbell.

This is a modified version of the winning review in the ARRC2011 Reader Challenge. (Here’s a photo of Kat receiving the award.)

Diana Carrick presents the Earl of Ashcroft with an offer too good for a notorious rake to refuse. So when he declines, she doesn’t know whether to feel relief or despair. She’s made a bargain with the devil: a child in exchange for marriage to the man who controls  the estate in which Diana grew up and which she loves.

Tarquin Vale, Earl of Ashcroft, is intrigued by the mysterious proposition but senses a bit of, well, dodginess about the entire affair. But this is a romance, after all, and his willpower is no match for Diana’s allure. Ashcroft embodies that favourite of all historical romance heroes—the rake who’s not really a rake—with an added bonus of being powerful enough to vanquish villains.

Anna Campbell’s work has been christened ‘Regency Noir’ and, to the extent that the villain creates a potentially sordid situation for Diana, My Reckless Surrender fits the bill. But it doesn’t come close to the darker themes of Claiming the Courtesan and Untouched. Much of the first part of the story revolves around Diana and Ashcroft’s mutual seduction, and these pages are dominated by passionate and sexy scenes. We also get subtle touches of humour that are not only delightful to read, but serve to demonstrate why Diana and Ashcroft are right for each other.

Campbell’s prose veers towards purple, but those of us who love her work already know this. There’s something delicious about Campbell’s masterful lovers:

He refused to suffer this incendiary craving alone. Some instinct told him she offered the right lover a depth of passion unlike any he’d experienced.

He intended to be that right lover.

and there’s something charming about Diana, who is in the process of discovering passion and desire, yet whose chaste background betrays her every time:

“So availability isn’t your only requirement in a lover?” Nerves made her voice quake. Nerves and a simmering need.

Oh, she was a sad, sad case. He wasn’t touching her, and still she burned. In his company, her body became something alien, beyond her control.

He burst out laughing. “Diana, do you have any idea how insulting your questions are?”

He shrugged. “Attraction is always mysterious.”

For this I can forgive the use of the term ‘interior passage’. Maybe.

Campbell has gone from strength to strength, and this is her best book so far. Although the bad guy is a caricature of sleaze and nastiness, Ashcroft and Diana are nuanced characters. Campbell balances Diana’s internal conflicts so that she comes across neither mercenary nor stupid. The climax of the story is dramatic, thrilling and, yes, a little over the top—vintage Anna Campbell.

This book won the Australian Romance Readers Award for Favourite Historical Romance 2010. You can watch a video of the author talking about the book at Scarlet Pages, the Avon blog.