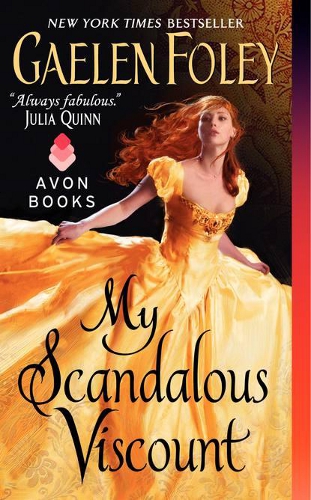 A fun romp and a good spy romance. But it’s not The Duke.

Carissa Portland, a ‘lady of information’ (AKA a gossip), comes upon what appears to be an irate husband who’s out to get Sebastian, Viscount Beauchamp. Unbeknownst to her, he’s actually Beau’s fellow agent and a member of the infamous Inferno Club. Being the lady of information that she is, it doesn’t take her long to find out everything and they end up having to get married. Beau has better things to worry about. His BFF and former co-spy has become a mercenary, their secret organisation is being investigated, and there’s trouble on every front.

Carissa could have been an annoying busybody, but I rather liked her. She’s intrepid, and her attempts at investigation to assist her husband are, in my opinion, quite practical and not stupid. She has a good head on her shoulders and she doesn’t come across as ineffectual. She gives it a go and is a pretty decent spy without entirely meaning to be. She also has an additional storyline, which author Gaelen Foley resolves well—it doesn’t turn into a big drama-fest or become a clusterfuck of miscommunication.

That said, I started out being rather bored with this book. It seemed like the same thing all over again, and I truly got annoyed by all the references to ‘The Inferno Club’ and the ‘Prometheans’ and the name dropping. Does a secret spy club really need such pompous names? And could one keep it secret if a) it uses such fancy names and b) your wife gets to the bottom of it within the first five chapters?

But by the end, I really quite enjoyed this book. The spy plot is engaging and well paced once you get past the first third of the book, the world-building, and the eye-roll inducing names. It’s fun, and everything is sorted out in the end. The story unravels while Carissa and Beau’s relationship develops, and I found it satisfying as a spy romance.

I did feel, however, that I lost a bit by not reading the first four books in the series. The first third of the book is also about catching up with all the other characters and how they fit into the story. In her afterword, Foley does say that this book is a connecting piece between the first half of the series and the next, and it seems like a lot of the exciting stuff happens here. It has made me want to read the next two, especially since I like the next two characters that have been set up.

I have read Foley’s work since the The Duke, and somehow I keep looking and waiting for something that’s as good as that one was. My Scandalous Viscount is a fun romp, but I don’t think it (or anything else Foley has written) can compare to that series and that one stand out novel, so if you’re looking for that, this isn’t it.

Who might enjoy it: Historical romance readers who love spies and secret clubs

Who might not enjoy it: Readers allergic to backstory info dumps

An advanced review copy of this book was generously provided by Avon/HarperCollins via Edelweiss. However, the Australian edition is published by Piatkus/Hachette.