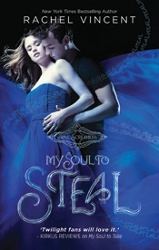 Heavy in angst and light on closure, this book should have fans in delicious agony as they wait for the next instalment in the Soul Screamers series.

My Soul to Steal is the fourth book of Rachel Vincent’s Soul Screamers series. I was excited yet apprehensive about this book because I knew—and the blurb implies—that there would be some kind of relationship triangle between Kaylee, Nash and Nash’s ex, Sabine.

Kaylee and Nash are in relationship limbo a few weeks after My Soul to Keep (book 3). She refuses to resolve anything between them until Nash is free of frost, the demon’s breath drug that he became addicted to, due to an accident caused by Kaylee. Meanwhile, Nash’s ex-girlfriend, Sabine, has moved into the area and tells Kaylee upfront that she’s there to take Nash back.

Sabine is a mara, a non-human parasitic species who feeds off people’s fears. At night she kind of sleepwalks and gives people nightmares so she can feed off them. When teachers start dying at school, Kaylee is convinced, despite Tod and Nash’s reassurances, that Sabine is behind it all.

Although the plotting in this book is a little less interesting than the previous, Vincent makes up for it by crafting Sabine in all her complexity. She’s a take-no-prisoners femme fatale where Nash is concerned, and she fights dirty, but she’s also emotional, passionate and vulnerable. I particularly loved the lecture she gives Kaylee on sex:

Sabine’s appeal is that she gives voice to the reader’s frustration with Kaylee: her lack of support for Nash when he needs her most and her fear of her desire for him. Sabine and Nash’s past also magnifies Kaylee’s insecurities about her relationship with Nash—the fact that Sabine and Nash had sex (a lot, apparently), their trust in each other, and the realisation that Nash remembers all the emotions he had with Sabine, whereas he traded his feelings of being with Kaylee to a demon in exchange for frost.

The love triangle between Kaylee, Nash and Sabine is never comfortable, and at times it was just exhausting. Sabine’s brutal honesty and her determination to do anything to get Nash back pushes the conflicts between the three of them over the top. It’s too much angst and misery on top of the misery of Averi pursuing Kaylee and her friends.

Most disappointing, however, is the lack of true character development in Kaylee. There’s very little real communication between her and Nash. There’s no significant growth in their relationship except that they’re now both martyrs for each other. Everyone except Kaylee seems to have grown a bit. It doesn’t help that Nash is a kind of idealised boy who seems to know what to say and do in response to Kaylee’s angst. Unfortunately, she doesn’t give him much back in return.

‘Are you mad at me because I slept with someone else  two and a half years ago? Before I even met you?’

‘Yes! …  And don’t say that’s not fair, because ‘fair’ isn’t even in the equation anymore. What you let happen to me wasn’t fair, either. And I’m sure Scott would agree.’

For a moment, I heard only silence over the line. I’d gone too far. I know it, but I couldn’t help it…

‘Are you trying to hurt me? It’s okay if you are. I know I deserve it. I just want to be clear on the point of this whole conversation, so I’ll know when we’ve accomplished whatever it is you need.’

I had to think about that for a second. ‘No. I’m not trying to hurt you. I’m trying to heal me.’

It’s great angsty writing, yes, but there’s only so much one can take.

Someone needs to die

Averi’s return was a surprise, although it really shouldn’t have been. I’ve grown weary of this recurring story arc. The series needs something fresh. Why don’t these people just move to a different neighbourhood?

The ensemble characters feel crowded.  Vincent needs to channel a bit of Joss Whedon and kill someone off. Speaking of Whedon, there’s a Buffy-esque feel around the whole embattled high school plot. Sabine is like Faith, the anti-heroine heroine. Or maybe Cordelia before she moved to Angel.

The most interesting secondary character is Tod, particularly in light of Reaper, the novella in which we see how Tod dies and becomes a grim reaper. He muddies the waters a bit, to the point where I thought he was somehow possessed, too.

Also, Tod gets a second job, and Vincent plays it up very nicely.

Heavy in angst and light on any new plot developments or closure of any kind, My Soul to Steal should have fans in delicious agony as they wait for the next book in the series. I’m giving this series one more book to resolve—or at least hint at a resolution to—the love triangle before I give it up. I’m too old for this much drama.

You can read Kat’s review of the previous books and novellas in this series here: Mixed Bag: December 2010 (Soul Screamers series).

Books in the Soul Screamers series (US edition)