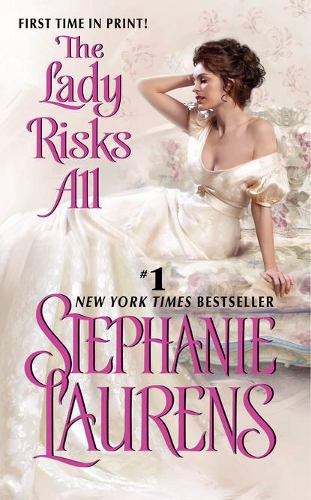 The Lady Risks All by Stephanie Laurens

Neville Roscoe, notorious and enigmatic, lives resolutely outside society, bound only by his own code of honor — until challenged by his desire for the one woman he cannot have. Miranda Clifford, is a lady imprisoned by rigid respectability — until tempted by a passion beyond her power to deny. Flung together in peril, through danger and intrigue, they discover a love impossible to ignore…or keep.

How a Lady Weds a Rogue by Katharine Ashe

Beautiful Diantha Lucas understands society’s rules: a young lady must find a man to marry. But Diantha has a bigger goal and she’s not afraid of plunging into adventure to achieve it. When daring, dashing Wyn Yale rescues her, she’s certain he’s just the man she needs.

As an agent for the secret Falcon Club, Wyn knows his duty, but he’s not about to admit he’s a hero of any sort. He has a plan too: steal a prized horse, murder an evil duke, avenge an innocent girl, and probably get hung for it-in that order. Wyn can’t afford to be distracted by a pretty face, even one with delectable dimples and kissable lips. But how can a country miss and hardened spy solve their problems when they can’t keep their hands off each other?

Lord of Temptation by Lorraine Heath

Lord Tristan Easton can navigate the world, but even after his brother reclaims his title and estates, Tristan remains lost, unable to connect with the brothers he was torn from so long ago…until an exquisite woman hires him to provide passage to see her fiancé.

Lady Anne Hayworth has mourned for two years, ever since she received word that her fiancé was killed in the Crimea. To get on with her life, she must say goodbye to him, and so she hires the infamous Captain Jack Crimson to take her to where she needs to go. Oh, but this captain is an irritating devil-flirting with her, tempting her…and offering her pleasure she’s never known existed. Crimson is a man she can never have, a man who will hold the secret of her weakness, a man she’ll never see again.

But during the first ball of the Season, Anne is introduced to the dashing and oh so familiar Lord Tristan Easton, and he is determined to make her his wife-even if he must destroy her reputation to do it.

My Scandalous Viscount by Gaelen Foley

Sebastian, Viscount Beauchamp lives by a code of honor, and now honor dictates he must marry Miss Carissa Portland. He has no regrets over stealing a kiss from the adorable little busybody-a fitting punishment for her putting her delectable nose where it doesn’t belong. But now, caught in a compromising situation, he knows he must make her his bride. He’s been in danger before-but never like this!

Carissa is not a gossip! She’s a ‘lady of information’, and all she was trying to do was warn that rakehell Beauchamp away from an irate husband. But even she can’t flaunt society, and while her head tells her that Beau’s a notorious scoundrel, her heart — and body — are captivated by his unexpected charm…and dangerous talents! But what Carissa soon uncovers about Beau and the Inferno Club’s secrets may prove even more hazardous than falling in love with your own husband…

Sacrifice the Wicked by Karina Cooper

Sector Three is moving fast. Director Parker Adams is in a position she’s never known before–the hunter has become the hunted. She has no time the indulge the mind-numbing sexual tensions between herself and Agent Simon. But there’s no denying the growing passion between them — especially when they only have each other to rely on.

Simon is doing his best to keep Parker alive as they go to ground topside, unable to seek help, and not even sure exactly who is hunting them. But Simon has bigger problems: like all witches or his generation — like Jessie Leigh and Juliet Carpenter — he’s starting to break down. This is the worst possible time to fall in love, but there’s no resisting the pull he feels when he’s with Parker. Together, they should be an unstoppable force. But there are enemies at play here that are threatening to crack the whole world wide open…and no sacrifice is too great in order to bring this nightmare to an end.