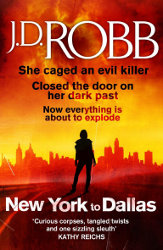 The plot brings nothing new to crime fiction. Nevertheless, this is a reasonably good thriller that should allow In Death series fans to finally get some closure on Eve Dallas’s traumatic past.

I almost didn’t finish this book. In fact, it was almost DNF before it even really began. I’ve read the first few J. D. Robb novels, and I read Patricia Cornwell’s Scarpetta series until the plot and characters went a bit WTF. So I’m not a stranger to crime fiction and the serial criminals that authors like to foist on readers.

But, for some reason, the beginning of New York to Dallas had my tummy churning. Serial child rapist Isaac McQueen was Eve Dallas’s first major arrest, and now he’s escaped prison. He’s determined to make Eve pay for putting him in prison and forces her to return to Dallas.

Readers of the series will know that Dallas is where, as a child, Eve finally escaped from her abusive father by stabbing him as he tried to rape her. Eve thinks she’s dealt with her past, but we—and husband Roarke—know this isn’t entirely true.

McQueen’s actions are calculated to discompose Eve. Because series fans know so much about Eve’s past by now, it’s not too difficult to anticipate some of the twists in the plot. Still, Robb uses these to provide Eve—and Roarke—with enough emotional conflict to keep them off-kilter.

This isn’t so much a mystery as a police chase. We know who the criminal is, and to some extent Eve tells us what his next move will be. The thrill is in how Eve will eventually bring him to justice. The way Robb arranges their final confrontation is almost a disappointment—I could see it coming from about the time Eve arrives in Dallas.

The investigation involves a task force  that includes Eve, her team in New York, the Dallas police, the FBI and Roarke’s one-man IT forensic expertise. I love Roarke as a romance hero, but his ability to buy everything and hack into everything in, like, two minutes was off-putting. I know it has to be this way so Eve won’t constantly be vulnerable outside of her job, but it’s still kind of annoying.

Robb also spends some time dealing with Eve’s fragile emotional state. Series fans will probably find that this provides some closure on Eve’s past, but I admit to skipping most of the session with Mira, her therapist and surrogate mum.

The plot brings nothing new to crime fiction. Nevertheless, this is a reasonably good thriller that should allow In Death series fans to finally get some closure on Eve Dallas’s traumatic past.

Who might enjoy it: Crime fiction readers who prefer that innocent victims survive

Who might not enjoy it: The squeamish and the paranoid