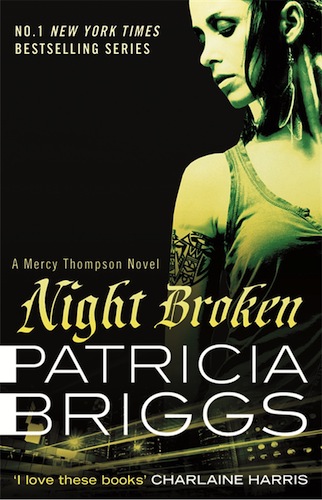 The big villain isn't nearly as fascinating as Mercy's relationships with Adam and the pack, which is perfect because those relationships are what keeps me hooked on this series. The big villain isn’t nearly as fascinating as Mercy’s relationships with Adam and the pack, which is perfect because those relationships are what keeps me hooked on this series.

The Mercy Thompson series is the exception to all my rules.

I’ve reviewed a few of the books in the series, but we’re now up to book eight—obviously, I read much faster than I review—and my love for these books remains strong. Even so, I worried when I read the blurb, because when Adam’s ex-wife Christy needs help getting away from an abusive relationship, Mercy reluctantly invites her to stay with them until the pack can sort out Christy’s abuser.

Christy is a manipulator of the worst kind, and it doesn’t help that Mercy remains an outsider when it comes to the pack—they accept her as Adam’s mate, but don’t really fully trust her either. Christy brings all these conflicts to the surface. The alphas fall over themselves to take care of her, and she couches her manipulations in ways that those around her can’t refuse without looking petty. It’s difficult to explain, but Patricia Briggs shows Christy off at her finest—which is to say, if you love Mercy at all you’ll probably hate Christy with a passion.

If that’s not bad enough, Mercy gets a visit from a Gray Lord, one of the most powerful of the fae, who wants his father’s walking stick back or else. Given that Coyote has the stick, and no one seems to know how to get hold of him, Mercy’s future looks increasingly grim. Her search leads to Gary Laughingdog, another coyote walker. The only problem is that he actively avoids Coyote when he can.

Meanwhile, Mercy is asked to consult on a police investigation involving what looks like a rabid werewolf on a killing spree. There’s a new werewolf in town, a drifter whom the pack has taken in, but Mercy is convinced that the creature behind the killings is something different—the Guayota is old, powerful and wields fire, and he won’t stop killing until he finishes his hunt.

The first book in which Coyote appears, River Marked, is my least favourite book of the series, and while Coyote is marginally more interesting in this book, he remains one of the dullest characters in the story, second only to Guayota. The latter is accompanied by bewitched dogs (tibicenas), which provide the epic interspecies battle to finish off the external plot.

Warning: a lot of dogs die in this book.

The mythology of the gods and spirit-based creatures don’t quite gel together yet, and there is a lot of background information that has to be covered to explain what they are and where they come from. The diversity is interesting, but the info dumping slows down the pace.

The fae and the vampires have small but important roles in Night Broken, but the plot is pretty heavily centred around Mercy and Adam’s relationship, and pack dynamics. Compared to Samuel in the earlier books, and Stefan in the later books Christy is a fairly simple, though effective, antagonist to Mercy and Adam’s relationship. A lot of readers won’t like how much leeway Adam gives Christy in this book, but through Christy, Mercy demonstrates just how far she’s come since Moon Called. I love that Christy gets under Mercy’s skin so well by targeting Mercy’s weaknesses, even if they’re largely around things that don’t matter in the world of murderous volcano gods and fae ultimatums. Christy is a great homemaker, and it chafes Mercy to be reminded that she’s definitely not, whenever she comes home to Christy’s beautifully served homecooked meals. I love that Jesse attempts to dissuade Mercy from inviting her mother into their home, and that Mercy decides to put Christy’s welfare and the pack’s cohesion before her insecurities:

‘You gave up control of the house to her,’ Jesse said as if it were a terrible and wrong thing. ‘And couldn’t get it back?’

I snorted, ‘You obviously grew up in a werewolf pack, kid. Werewolves don’t know everything. Giving her power down there did not hurt mine. This is not her home, and a dozen gourmet dinners aren’t going to change that. If she is scared and needs to feel in control over dinner, I can give her that because I don’t have a creep chasing after me. Ultimately, she cannot take over this house because it belongs to your father, and he is mine.’

At one point, Mercy finds Christy’s toiletries in her and Adam’s bathroom, and she’s definitely not happy. In real life, you’d have stern words with your partner over this, but in fiction, I very much enjoyed how Mercy handles this particular scene—showing more subtlety than I expected—and the escalation of this issue later in the book. The satisfaction of Mercy’s retaliation is well worth the angst.

Adam doesn’t get a point of view in Night Broken, so it can be frustrating when he appears to fall for Christy’s manipulations. Again, this will probably irk romance readers, but—call me a fangirl—I love seeing how Mercy reacts to it all. (Adam’s take: ‘Mercy’s not subtle. When she manipulates you, she wants you to know you’ve been manipulated.’) Adam’s weakness, shared by almost everyone in the pack, is that alphas love to take care of people, and Christy knows how to use this to her advantage:

Adam didn’t say anything. He took a deep breath and just—accepted what she said. It was the first time I’d ever seen a real fight between them. Watching him as she spewed guilt all over him, I realised that he enjoyed our fights almost as much as I did. When we fought, he roared and stalked and fought back. He didn’t let his face go blank and wait to be hit again. Being willing to accept responsibility for the well-being of others was part of being Alpha, part of who Adam was, and she was very, very good at using that against him.

I love this deviation from most paranormal romance alphas I’ve read, who are often needlessly overprotective of their partners. Adam has a sense of when Christy’s actions are stepping over the line, but leaves Mercy to deal with it as she feels appropriate, except when it puts people in danger.

Mercy is still trying to find her place in the pack, knowing that as Adam’s mate she can expect deference from the werewolves, but also knowing that their trust has to be earned. It’s easy to forget how much Mercy’s presence in Adam’s life became a destabilising force for the pack in the earlier books, and her love for Adam isn’t a cure-all for her conflicts with other members of the pack. Night Broken demonstrates the level of trust between her and Adam, and the seriousness with which she takes her role as the mate of the pack Alpha. I particularly love the scene where Mercy is alone in her shop when she senses an intruder, and she’s having flashbacks to  when she was assaulted in Iron Kissed, and thinking of hiding until help arrives:

I had time to hide.

The security camera had its eye focused on me, recording my every move. If I hid from this human, the whole pack would know what I had done. Christy was human, fragile, and no longer the Alpha’s wife. That she had gotten into trouble she couldn’t get out of by herself was to be expected.

In a wolf pack, the dominant members protect—they don’t need protection. I was not just the Alpha’s wife. I was his mate and a pack member. That all meant that what I did mattered, and I was expected to make a better showing than Adam’s ex-wife, who’d driven this man off with nothing but a frying pan.

Briggs also ensures that Adam and Mercy have a chance to regroup as a couple in the course of the story, not only with tender moments but with lots of humour and a little sexy conversation. There are no festering emotional sores here—which is why Christy never truly bothers me. It’s clear that Adam is is no way conflicted over his relationship with Mercy; the only question is how Mercy can outwit a master manipulator at her own game:

If her stalker didn’t kill Christy soon, she might just drive me to it. At this point, I wasn’t even certain how much of it was her fault and how much of it was me being jealous. Not of Adam, Adam belonged to me, soul and wolf. If it were just Adam, I’d have more control. It was the pack.

Mercy has always been an outsider, and it’s fascinating to see her trying to gain the pack’s trust and respect. I find her a very human character. I wouldn’t call her a Mary Sue, because there’s something deeply unsatisfying and somewhat creepy about a world that bends to suit the needs of a Mary Sue. The world doesn’t bend for Mercy; for the most part she’s reacting to it, and her decisions always have consequences. Mercy is more of an aspirational heroine—the kind of person people would like to think themselves capable of being. She’s strong but flawed, and even when she tries to be the better person, it’s not always perfectly executed. What shines through is her commitment to Adam and the pack, with all that it entails, especially with a pack that doesn’t quite trust her.

The pack gives off a fairly authentic sense of an extended family—people in the family tolerate each other’s foibles much more easily than they do any newcomers’. Mercy and Adam are my fictional role model of a solid marriage—implicit trust with small gestures of affection to ensure that small niggles don’t escalate into emotional drama. I also love Mercy’s relationship with Adam and Christy’s daughter Jesse, who understands what kind of a person her mother is. Mercy often ends up championing Christy to her, which is its own quiet heroism.

Among the secondary characters, Honey is my favourite in this story. She’s still grieving Peter’s loss, and I expect a little more heartache before it gets better, but Night Broken hints at a possible future for her. There’s an interesting obstacle to Stefan fully reconciling with Marsilia, and Wulfe just gets creepier in each scene he’s in. (Honestly, I find all the plots involving vampires extremely disturbing.) The story also introduces a new submissive wolf into the pack and I can’t wait to see what Briggs has in store for him.

Okay, yes, due to the ex-wife subplot I killed a fairy. But at this point, I love this series so much that, barring HEA breakage, the author can do no wrong. The big villain isn’t nearly as fascinating as Mercy’s relationships with Adam and the pack, which is perfect because those relationships are what keeps me hooked on this series.

Who might enjoy it: Series fans who love seeing Mercy riled up

Who might not enjoy it: Romance readers who dislike disruptive ex-wives