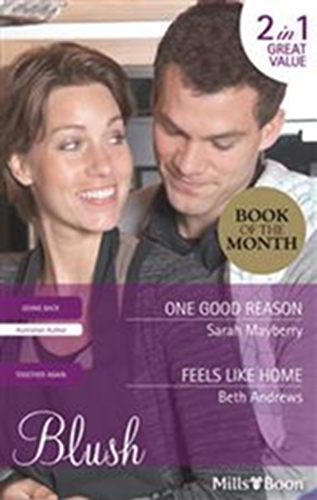 Review of: One Good Reason

A dramatic story with moments that will break your heart. Unfortunately, the hero's emotional catharsis is rushed and the the resolution doesn't match the story's earlier promise.

A dramatic story with moments that will break your heart. Unfortunately, the hero’s emotional catharsis is rushed and the the resolution doesn’t match the story’s earlier promise.

Gabby Wade has held a torch for her boss and best friend Tyler Adamson for four years. Unfortunately, Tyler is now very happily married—and we know it’s for read and for good because Australian author Sarah Mayberry wrote his story in The Last Goodbye (Mills & Boon Super Romance). When Tyler’s elder brother, temporarily home for reasons unknown, mistakes her for a lesbian it’s the last straw. Gabby gets spectacularly drunk…and realises that she’s been going through a long period of heartbreak and grief.

Jon Adamson is helping Tyler out with his furniture business while coming to grips with their father’s death. They come from an abusive family and Jon is wracked with grief that he didn’t do enough to protect Tyler from their violent father.

Gabby and Jon immediately feel a connection when they meet, but it’s a slow burn and they both need to face some truths before they can even acknowledge the possibility of accepting a new relationship, no matter how temporary. Gabby guards her independence fiercely, and Jon’s instinct to protect those around him tends to irritate rather than charm her.

But Gabby isn’t invulnerable, and when she gradually lets Jon into her life—her private life, not just her life at work where she spends most of her time—they begin a passionate though fragile relationship. But Jon still has a lot healing to do, and his heart isn’t quite ready to fully open up. Gabby, however, has been through this before, and she’s unwilling to give her heart fully to someone who isn’t capable of risking his heart for her.

It’s to Australian author Sarah Mayberry’s credit that even when her books haven’t been to my taste, I still appreciate her craftsmanship and enjoy some—if not all—aspects of the story. All the characters in this story and their way of speaking with each other ring true—including all instances in which ‘mate’ is used, I’m relieved to say. Gabby is charming and complex, and Mayberry isn’t precious about Tyler. He’s almost always seen from Gabby’s perspective and doesn’t always come across as worthy of being a romantic hero.

Jon is tormented for most of the book, and although I was affected by his struggle to work through his guilt, I found this part of the novel somewhat…dull. It felt repetitive and rushed and forced and, yes, I skimmed through to the end. This should have been a longer story, based on where Mayberry starts with Jon’s character. There’s a lot for him to work through, and although the author starts off with a lot of unspoken longings, I felt that subtlety is eventually sacrificed to fit the happy ending within the word count.

The other aspect of the story that bothered me a lot was Gabby’s previous relationship with Tyler. This was no mere fling—she was with him for three years before ending it because of his lack of emotional commitment. The thought that the hero’s brother knows the heroine intimately and has seen her naked was, at best, distracting. To Mayberry’s credit, she eventually addresses the issue through Jon’s point of view. Still. It was very distracting.

One Good Reason is a dramatic story with moments that will break your heart. Unfortunately, the hero’s emotional catharsis is rushed and the the resolution doesn’t match the story’s earlier promise.

Who might enjoy it: Readers who love a slow, romantic start and a dramatic finish

Who might not enjoy it: Readers who would find the notion of a hero ending up with his brother’s ex-girlfriend more than a little distracting

This book is connected to The Last Goodbye (Mills & Boon Special Moments, April 2011), which tells the story of Jon’s brother, Tyler.