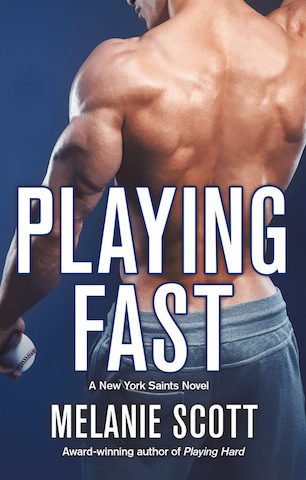 I find the reformed bad boy irresistible in romance. But even I was skeptical about the redemption of Finn Castro, the antagonist of the previous book in the New York Saints series, Playing Hard. Finn was such a Type A arsehole, and caused so much havoc in his wake, that I was prepared not to like him.

But once again, Melanie Scott [ T | F | W ] delivers the goods. Playing Fast is set several weeks after the end of the previous book, and in that time Finn has had an epiphany. He’s been demoted to the Preachers, the feeder club for the Saints. (Possibly that made no sense. I know nothing about baseball teams. Just: he was sent to the reserve grade equivalent.) His motto this season is to keep his head down, get along with the team, and earn a spot back into the Major League.

Eva Harlowe, administrative manager for the Preachers, is mortified. She’s had a crush on Finn for ages, but after almost fourteen years of seeing players’ girlfriends come and go:

She wasn’t dumb enough to admit a crush on a ball player to anybody on the premises, let alone a player from their parent team. She never would have heard the end of it.

Eva keeps it cool around Finn, who is immediately attracted to her but believes she’s not interested. It makes for some delightful conversations with team mates, who are both very protective of Eva, but who also enjoy ribbing Finn.

Aside from not wanting to be gossip fodder for the Preachers, Eva plans to finally pursue her dream of becoming a sports photographer. When her parents passed away, she was left to raise her three younger sisters on her own, and now that they’re all independent adults, she can finally pursue her dream — a prestigious mentorship in Los Angeles with a top sports photographer. And anyway, she’s six years older than Finn, which kind of bothers her.

But the chemistry between Eva and Finn can’t help but boil over, especially when Finn realises that she’s interested in him, too. There are conditions, however: Eva insists on keeping it temporary; Finn insists on monogamy and openness — no secrets from the team. They reluctantly agree to each other’s conditions, but fall easily into a routine that starts to feel more and more like a relationship. Eventually, though, Eva has to choose between her dream, her family, and Finn.

Surprisingly, it’s Eva’s issues that dominate the story. Finn is, for all intents and purposes, reformed by the time the story begins. I’m not sure how I feel about this. On one hand, I love that the hottie hero is sensible, reliable and totally ready for a relationship. On the other hand, I LOVE, LOVE, LOVE tortured, brooding bad boy heroes.

In my review of the previous book, I mentioned the lack of contrast between the emotional highs and lows in the story. Playing Fast has a similar weakness, compounded by stretching Eva’s reluctance to move out of her comfort zone at every point of conflict. I needed Eva’s narrative voice to be much stronger and more passionate about the things and people she cared about, in order to believe her choices, and the writing sometimes falls short. Eva dithers and that gets irritating after a while. Thankfully, Finn is around to be all manly and hot and gropey, which masks some of the pacing issues pretty effectively.

Maybe I’m looking for the high conflict and raw passion I found in the first three books of this series, but it almost feels like books 4 and 5 belong to a different kind of series with a slightly different tone. That said, I have absolutely no doubt that fans of the New York Saints books will adore Finn. The scenes of domesticity between him and Eva are plain adorable — and maybe that’s why I couldn’t understand why Eva wouldn’t fight harder to make the relationship work at certain points in the story.

One final note: I love the way Scott subtly plays with some romantic paradigms. When I expect Finn to be overly aggressive, he backs off. When I expect him to hang back, he shows his affection to Eva joyfully (and without sleaze). When I expect him to intervene on behalf of Eva, he stays in the background and supports her without taking charge. Eva’s first orgasm with Finn takes her by surprise, and where he could have — ahem — hit a home run, he insists on having a conversation first. And, of course, the ‘I love you’ isn’t uttered like it’s the harbinger of world peace:

‘Am I missing something or did you just tell me you love me in a very ass-backward way?’

You can read an extract here. Published by St Martin’s Press.