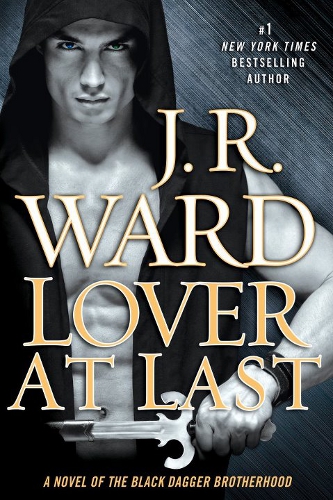 If you’re hungry for clues about upcoming books in the Black Dagger Brotherhood series by J. R. Ward, Decadence has put together what we think we know about what’s coming next. Includes excerpts from upcoming releases and dates for Ward’s virtual signing.

Okay, so I’ve been shamefully late with an update, but whenever something big happens like the release of the Lover At Last cover, I’m at work and Kat breaks the news first. But when I received a notification of two upcoming virtual signings, I knew I had to get off my butt and share all the little tidbits I’ve collected.

The first line of the book will be (pending edits): ‘Now THAT is a motherf**kin’ whip!’

No context was given, but I think we could all guess who the obvious suspect is.

There has already been a quote from Rapture posted on Ward’s Facebook page, in which, although no names were used, I think it’s safe to assume it’s the heroine kissing the hero and wishing she could hold onto the moment but knowing that you can’t physically retain moments, despite the impact they make on you.

I’m sure we’ll see more closer to its release, scheduled for September 25.

The Fallen Angels series has been upgraded with a US hardcover release, so it will be included in Ward’s virtual signing program. It will be available for preorder from August 5, 8.30am New York time (August 5, 10.30pm if you’re in Sydney) until September 14. If you don’t like hardcovers, the local publisher will release a trade paperback shortly after the hardcover is published on September 25.

Lover Eternal (Rhage’s book) will also be reissued in hardcover and will available through the virtual signing from October 7, 8.30am (10.30pm in Sydney) until October 26.

Since the closure of The Bookstore in Kentucky, there is an official JR Ward Virtual Signing business, where her team coordinates the orders and dispatches of all the books. I think there was a combination between increased popularity of the virtual signing and possible lower stock levels, but the last virtual signing was forced to close early when they ran out of stock after their second or third order from the supplier. So if you have any interest in buying books from this signing, you need to act quickly so you don’t miss out. Put these dates into your calendar.

They offer different shipping options at different prices. The cheapest is the non-trackable First Class International for around $15 and the next option is closer to $45, but it is trackable. Of course they recommend the trackable option, but will not replace lost or stolen books shipped overseas whichever option is chosen. I’ve used the non-trackable First Class International and had books arrive in around a week, but Lover Reborn took closer to two weeks to arrive. Obviously I’m not making any guarantees either.

J. R. Ward and Jessica Andersen got together for a session at the RT convention in Chicago earlier this year, and Alpha Heroes posted some very interesting highlights from the event. I so wish I could have been there, especially since there was a swear jar and she had to make a few deposits.

Liza has done it again! I wish I could be in America so I could travel to her in-store signings and take my own notes on the Q and As, but since I can’t, at least Blogging by Liza can. She’s got some really great notes that are definitely worth checking out.