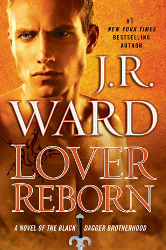 Last week, J. R. Ward signed books in Cincinnati and Bex beat me to posting a link to a blogger who was there and took notes. If you haven’t already seen it, go to Liza’s blog for confirmation of Tohr’s HEA (no surprise) and other news.

This is the J. R. Ward part of the joint chat she hosted for Christine Feehan this morning. She wasn’t able to stay long because she had a migraine and the Christine Feehan portion had run for two hours. It was easier for her to just pick random questions in a free chat format, but it was difficult to keep up and connect questions with answers because with minimal mod intervention, the chat runs really quickly. I’ve tried to stick as closely as I could to what was said, but the questions and some answers have been paraphrased. This is not a transcript.

I haven’t noted down everything that has been asked before, like ‘Is Lash coming back?’ (She says that question was answered at the end of Lover Mine.) and ‘Does Wrath get his sight back?’ (No.)

And beware: there is one major spoiler on Envy.

Both writers have great respect for each other and could found a mutual admiration society. When Feehan mentioned her newest release or convention, Ward posted the links for her.

Before the chat started, Ward told us about the first time she met Feehan. It was at a conference a couple of years ago and Wardsaw her across the room and was all like, ‘OMG, it’s Christine Feehan! Don’t be an ass. Just go over and introduce yourself.’ So she walked over and in this mousy little voice said, ‘Hi, I’m J. R. Ward.’

‘Hi, I like your books.’ Ward apparently fell over in a dead faint, although maybe not literally.

Feehan helped Ward get her agent and gives the best advice, especially on promotion. She’s the reason we have the paranormal romance genre and is its reigning queen.

Ward: Christine and her family have done nothing but support me and Team Ward and I couldn’t respect her more. Thank you for coming tonight and having my back. I know you don’t like ass kissing… Please know my success is a direct result of so much advice you have given me.

Feeahan: You’re making me cry. Your success is a direct result of your own talent.

Lover Reborn includes some very steamy scenes between Tohr and No’One, and the band of bastards will have a huge presence in the book because Xcor is going for the throne. Although he was relatively absent from recent books, Phury will be in Tohr’s.

‘Assail is a very interesting male. An old school vampire. I love Assail.’ In a chat she did earlier in the week to test the software, Ward confirmed that Assail is his own male and not one of Xcor’s bastards. Nor is he wolfen (no word on when she is going to introduce any wolves).

‘Read the end of Lover Reborn for Layla’s HEA, but don’t jump to conclusions.’

[Teasing Christine] ‘Blay’s been pursuing something else in his down time and fighting. So no playing doctor for real yet. But it’s coming.’ Could this be why she doesn’t see Blay becoming a Brother? He’s going to become a healer? Or does she mean playing doctor in a different sense?

Xhex has never been pregnant.

In future books, we can expect Manny to go through the transition and John to become a Brother.

‘I believe Butch and Manny have other siblings.’

Why are Shadows the only ones who can kill symphaths? ‘You’ll find out more about their powers later.’

Trez and iAm will get separate books. They share intertwining plots but are too big to do together.

Will we ever see Butch and V get intimate? ‘Who says they haven’t already? ;)’ Evil, EVIL woman!! This is twice now she’s said that.

Was it hard for V to forgive Jane for almost helping Payne kill herself? ‘Absolutely. But he understood it was Payne’s choice, not hers.’

Do the Brothers ever get nostalgic for other music from earlier eras they’ve lived through, like jazz or classical? ‘Good question. I haven’t seen them getting nostalgic, but they’re busy defending rap against Manny’s onslaught.’

What was the inspiration behind the way the Brothers speak? ‘No inspiration, that’s just how they talk.’

What’s the Omega’s name? ‘The Omega.’ It’s not as silly a question as it may sound because we learned the Scribe Virgin’s name is Analisse in Dark Lover.

Will Michael from ‘Story of Son’ meet the BDB? ‘I’m not sure. I love love love him and wonder about his kids, but he and Claire are happy doing their own thing. But their kids, that’s what’s going to be interesting, LOL.’

She teared up over Eddie. KR regarding Eddie coming back.

‘As long as I stay out of the way, I’m drafting. I can always pull pages. If I try to impose my own view or influence the storyline, the pictures and voices dry up. So I record what I see.’

Which authors would you recommend while I’m waiting for your next book? ‘Christine Feehan. Thea Harrison rocks. Darynda Jones. Suzanne Brockmann. Jessica Andersen. [In agreement with Christine Feehan] Nalini Singh. I think she has a new book this month…. I love KMM (Karen Marie Moning).’

Would you go to DragonCon at some point? ‘I’d love to, but travel is hard.’

‘I’m focussed on the books. If the right movie deal came along, sure, but the books are my main focus.’

Which was the fastest book to write? ‘None of them were fast. They’re like pulling teeth because the Brothers are big and complicated.’ And yes, she was aware of the double entendre there.

‘I don’t read other vampires so I don’t get subconsciously influenced. The Brothers are what they are and the clearer I keep my vision of them, the better they talk to me.’

What is the best and worst advice you received when you were breaking into publishing? ‘The best was not to hurry to send a piece to an agent or editor. Take your time, get it right. And there was something specifically from Christine that changed the trajectory of my career. She knows what it is. I must have blocked out the worst because nothing comes to mind.’

She hopes to finish the Jessica Bird contemporaries.

Until the 27th of September (US time), you can pre-order a signed hardcover of Dark Lover from Ward’s official virtual signing page. The cheap international shipping option is available, so the book and delivery cost less than AUD50. The Dark Lover hardcover (collector’s edition) is officially released on October 4.