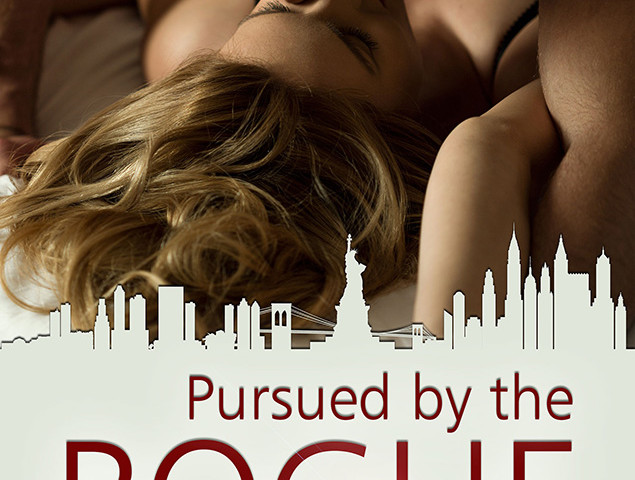 Review of: Pursued By The Rogue A reading copy of the book was generously provided by the publisher via NetGalley.

The first book in the multi-author series Fairy Tales of New York features four friends who found each other at Catholic boarding school. Dawn Turner thought her parents had abandoned her when they shipped her off to her aunt in Upstate New York, where she was able to attend the exclusive St John the Apostle Academy under a scholarship. At a twenty-first birthday party, Dawn lost her virginity to her best friends brother, Finn Sullivan, and the results of that night continues to haunt her.

When they cross paths again — Dawn a successful CEO and Finn a renowned violinist — they agree to keep it casual. Sex with friendship and no strings attached. But the heart wants what the heart wants, and soon Dawn and Finn have to face what they left unresolved all the those years ago, even if it means losing each other all over again.

Pursued By The Rogue isn’t a long book, but Kelly Hunter is the master of nuance and understatement. From the first page to the last, she squeezes so many feelings out of me that I’m left in awe of what she can do with words. It’s not like this scenario hasn’t been done before — young lovers separated by guilt and secrets, then reunited to finally face some difficult truths — but Hunter has a gift for creating characters that are larger than life yet still so very relatable.

When I was a teenager, one of my favourite books was a Sweet Dreams novel by Janet Quin-Harkin called Never Say Goodbye. The heroine loved horses, and in order to be around them, she worked as a horse riding instructor for kids. When the hero turns up to sign up for lessons, he rubs her the wrong way, but her irritation changes to understanding when he reveals that he has multiple sclerosis and he wants to learn how to ride before his body makes it impossible.

Pursued By The Rogue reminded me a lot of that book. That sense of recklessness in knowing you might only have a limited number of years to achieve everything you want to do. The fear that there won’t be enough time. And the premature guilt that everyone who cares for you will eventually suffer when the disease progresses, which leads to doing destructive things that drive people away. I read this book on the plane, and I had to sniff back tears at some of the most heartbreaking moments.

For such a short novel, there are a lot of secondary characters in Pursued By The Rogue, and I’m amazed to discover that I care about all of them. Hunter has truly mastered the art of short word counts. I love Dawn’s friends:

Dawn the abandoned, Faith the motherless, Mercy with her elsewhere heritage, and then there was Zel, the final addition to their little group of four lost souls.

I love how unobtrusive they are in the story while still being essential. The same holds true for Dawn’s mother and aunt, and even Finn’s father who is a mere spectre for most of the book, but does a wonderful job of bringing together the theme of family at the end.

Dawn is a refreshingly independent heroine. I love that she wants to remain unattached, but isn’t a hermit, and Hunter does a fabulous job of demonstrating Dawn’s attempts to push Finn away even as her heart can’t resist.

And Finn is absolutely gorgeous. It’s tough to write a hero with few hang-ups well — I think that’s why alphaholes are so prevalent in romance and in self-published work. There’s a lot of intensity and high drama to be had with a hormonally charged, super possessive hero.

Finn is nothing like that. He’s a typical Hunter hero — confident, sexy, charming, funny and perfect for the heroine. He’s not without edges, but he smooths them out whenever he’s with Dawn. He’s totally swoonable. What’s more, he’s the first to acknowledge that just-sex is no longer on the cards for him, though in many ways that’s made clear from the moment he sees Dawn again.

“What kind of music will you have playing?”

“That going to be a deal breaker for you, music man?”

Music all afternoon for him, melancholy and all-encompassing. “With all that’ll be playing in your head after rehearsal, I’m wondering whether you might like silence.”

He went very still at that. And then very carefully set his coffee back down. “Don’t do that,” he ordered gruffly. “Don’t be that understanding. I can’t be just sex if you do that.”

“Elevator music it is.”

Dawn sat back and smiled and kicked gently at the chair his violin sat on. “Good.”

I’m a sucker for musician heroes (or heroines) expressing their unspoken emotions through music, and when Finn does the obligatory musical catharsis, it’s one of the most beautiful scenes I’ve read in a very long time.

So I guess what I’m saying is: Get this book and mark it as a keeper. Then head to your local Irish pub and curse Kelly Hunter for giving you unrealistic expectations about concert violinists and childhood sweethearts.

You can find an extract of the book here. Published by Tule Publishing.