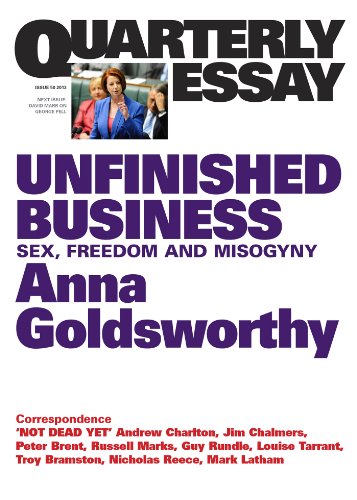 In her Quarterly Essay, Unfinished Business: Sex, Freedom and Misogyny, Anna Goldsworth writes, among other things, about the messages that books such as Twilight and Fifty Shades of Grey convey to female readers. Book Thingo invited readers to share some of their thoughts on the essay. (You can find a list of participants here.)

Kat’s note: When I began approaching fellow readers to comment on Anna Goldsworthy’s essay, I tried to look beyond the romance community. I met Nyssa Harkness through Twitter, and although she specialises in sff, we’ve had a lot of interesting conversations around reading genre fiction.

Nyssa is a Masters of Research student at Macquarie University who specialises in genre fiction, gaming and the creative society. She is currently researching the role of the romantic zombie in Young Adult fiction. Nyssa blogs at nyssaharkness.wordpress.com and tweets as @vintagezombie.

It’s the way things have always been is a complete copout. People misattribute these things as innate, rejecting the idea that society could have any possible influence or sway over what or how they think. The state of ‘normal’ is what society has dictated it to be. This is what I find fascinating, those little things that are so taken for granted as ‘this is the way things have always been’ that they are shoved under the carpet and many don’t care to examine or ask why. Anna Goldsworthy’s essay is about the little ways in which women’s role in society goes largely unexamined. Society is a fickle and hypocritical master (patriarchal noun intended) who seems impossible to please. Women’s bodies are property of the society, their choices constantly criticised and their desires diminished as not important. While there is a lot to say about this essay, I’m going to focus on marginalisation and readers.

As much as we know how romance is one of—if not the—best selling genre in the world, the general attitude is that it is for silly housewives who have nothing better to do and long for something more than what they currently possess. Some genres are more respected than others: science fiction is above romance; literary is above everything, of course. Romance makes you expect too much and romanticises abusive relationships—apparently. I hate these assumptions for two reasons: they assume that readers are blank slates that will absorb anything they read, and they undermine female autonomy when it comes to their desires.

There is still a general sense of shame attached to reading romance. Mills and Boon probably bears the brunt of the attack—it’s infantile, it’s all the same story with different names, it’s manufactured by marketers are just a few of the sayings I’ve heard or read. In general, romance is seen as trash, fairy floss, without substance or deeper meaning. When I was a teenager, I used to sneak my sister’s Johanna Lindsey novels and hide them behind my bookcase so my father wouldn’t find them—and I suspect I’m not alone (very varied reactions to this on Facebook and Twitter! Some parents were very supportive of any reading!).

While Goldsworthy states that there is a level of acceptance for books like Fifty Shades (p56), I think that is a little optimistic. I cannot compare the levels of casual hate I see for Twilight and Fifty Shades with any other book. There are numerous memes for this hate, and assumptions about the life, intelligence and goals of the person who reads them (apparently, those who read Harry Potter or Hunger Games are always smarter than those who read Twilight). Goldsworthy interprets the use of ebooks to be liberating due to the anonymity (p56), but—aside from personal preference—does this also mean that reading romance is still something to be hidden? Those embarrassing covers as a teen now safe from prying eyes on the train as you read a nice steamy scene?

Love is such an important part of our culture. Romance highlights how integral relationships are for humanity (taking into account variations across cultures and time). Why is it not lauded for its ability to explore humanity? Is it because of female subjectivity and female gaze? Goldsworthy quotes Sarah Waters in the New Statesmen that after a career of writing about women, Hilary Mantel was recognised as a ‘literary heavyweight once she produced a novel that was all about men’. The dismissal of female subjectivity as not important or lesser is a silencing tactic. Women are seen as simply ‘playing the gender card’ when there is clear disparity in society. It so pervades society that recognition of this struggle for equality is seen through our politics, our icons, our figures and even our fiction.