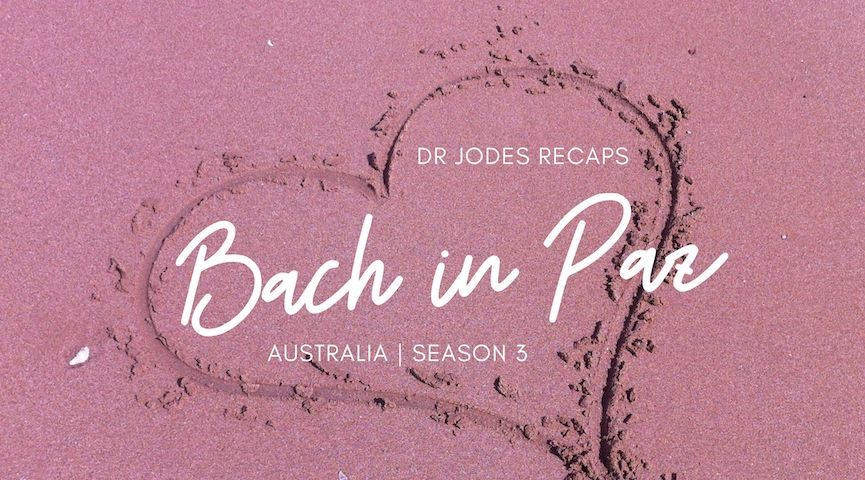 You bring the headshots, I’ll bring the red thread, let’s map out who’s slid into whose DMs like we’re trying to solve a murder.

Welcome back, pals! Yes, it is Sunday! No, the show was not on Sunday last week! No, Channel Ten have not seen fit to bless us with anything like a regular viewing schedule! Yes, they’re putting it on four nights this week! No, they will not, despite regular exhortations, think of the recappers! Yes, when I realised how many nights it was on, I started hearing the soundtrack to Platoon in my head!

…seriously. I’m going to end up writing a truly humiliating amount of words about this franchise this week. I’m quite hard to embarrass, but this might do the trick.

Let’s get into the pre-recap (precap?) nerdle before this word count bloats even further. I want to talk a little bit about Jake’s big move at the end of last episode, where he left Paradise Island with a screed about how he abhorred ‘friendship roses’.

Red roses and romantic love have been closely associated in Western culture for quite a while – I mean, just look at Valentine’s Day, where they are in strong competition with chocolates in heart-shaped boxes to be the most ubiquitous gifts ever. It’s hardly a surprise that the Bachelor/ette franchise borrowed this iconography for perhaps its most iconic feature: the rose ceremony. If you’re given a rose, you’re being symbolically offered a chance at romantic love. If you don’t receive a rose, then love is not for you.

When Jake decried the friendship rose, he was effectively insisting that the rose ceremony is a ritual with meaning. Specifically, he was insisting that the rose as ritual object is a dense signifier, imbued with a set of specific romantic connotations. To offer a rose in friendship is to undercut those connotations: to empty the signifier out of meaning.

The Bachelor/ette franchise proper is set up in such a way that a rose denotes the continuation of romantic interest. If, as Lauren Berlant argues ‘the form of love is an intention – not a compulsion – to repeat being attached’ (2008, 15), then the rose is a clear symbol of that: the Bach is ritually suggesting that they intend to pursue their attachment to a contestant, at least for a little while.

In Bach in Paz, however, the rules are a little blurrier. You could, in theory, form an alliance with someone, and just keep passing roses back and forth until the end of the show to maintain your place there, permanently tipsy at the open bar, even if you had absolutely no romantic interest in them and no desire to pursue anything further. It’s much easier to game the system than in the franchise proper.

But no, quoth Jake the Toolie, he who had fallen in love on this show before. For the show to work, the rose needs to mean something. Even in Bachie schoolies, the rose should continue to be imbued with that same set of meanings as in Bachie proper: that intention to repeat being attached romantically. You shouldn’t get to be permanently tipsy at the open bar unless you’re doing it in the service of a real chance at falling in love.

I wrote a bit last week about how sincerity matters in this franchise. When Jake decried friendship roses, he was effectively insisting on sincerity. This is a fascinating diegetic manoeuvre, and I’ll be really interested to see if this kind of insistence pops up again anywhere else – especially now we’re in the third season of Paradise, and people have probably figured out how to play the system to maximise the length of their drunk holiday a bit better.

Will that happen tonight? Let us to the recap to see if we can find out!

Everything at the beginning of the day is very calm. Everyone is chilling out, bobbing around in the pool, casually chatting about what a fuckboi Ciarran is… just normal Paradise things.

But! There is no normal in Paradise! ‘This seems like the calm before the storm,’ quoth Helena.

Smash cut to B-roll of a storm rolling in. No one ever accused this show of being subtle.

This definitely-not-extremely-on-the-nose storm heralds a new arrival on our beach of drunken horniness. Enter:

Keira (Richie’s season): if you’ve been reading these recaps for a while, you’ll know Keira (who enters by declaring ‘don’t you know who I am?’). She was the villain on Richie’s season before going on to fall in love with permanently sunburned Jarrod on the first season of Bach in Paz. It lasted a while, but clearly not forever, because… here we are.

Keira is, in short, a capital-C Character, which means they have to make a real production out of her arrival. To that end, Osher swoops in and yoinks all the lads out of Paradise, leaving the women to panic about what could possibly be happening.

(Interestingly, several of them – notably Jess – are worrying that the new entry will be Kiki. She was in Richie’s season, where she got about three seconds of screen time, but she’s been linked to Ciarran in the press. Yet again we have Ciarran’s fuckboi-ness making a relatively minor character from the main franchise a major figure in Paradise.)

They’re clearly trying to innovate with the format this season, and this is another example of it: they’ve borrowed the format from Blind Date so that Keira can meet all the bros. She sits on one side of a wall, and isn’t allowed to speak, so the boys can’t work out who she is. Osher then poses questions to them (addressing them by number), and Keira picks the one she likes the best, based on their answers.

I knew the bar was low, pals, but I didn’t realise quite how low.

The lads are startled when they realise that the mystery new lady is Keira. ‘She’s a huge name! OMG!’ Timm says, which really gives me a lot of things to think about in terms of Bachie celebrity hierarchy. Maybe I’ll nerdle about that sometime in the future.

This concept of Bachie celebrity is particularly interesting when you consider that Keira has been paired with Conor Cleanskin – a franchise newbie – on this date. ‘I kind of like that he doesn’t know who I am, so he doesn’t have any preconceived notions,’ Keira says. ‘But also… I’m going to have to show him the ropes.’

This latter notion is specifically about dating on television, and I’m so fascinated by that too. There’s, like, an idea in there that dating for TV is a specific kind of performance (which of course it is, but you rarely hear it directly articulated) and a skill you have to learn. So much of the curtain is being pulled back here about what it means to be a reality TV star, and it’s so interesting.

There’s another aspect of this happening back on the island. The women aren’t exactly thrilled to hear Keira’s coming in – especially Alisha. Apparently during Paradise last year, Keira put some pretty mean commentary on her insta specifically about Alisha and Jules, and when Alisha DM’d her about it, she doubled down and then just went even harder.

So much of the diegesis on this show happens in the epitext. There’s like this whole secret plot happening in the DMs which the audience only knows a tiny little bit of.

That said, there’s plenty of plot on the screen, eg. Jamie just being completely unable to read social cues. ‘Yeah, I’m so excited to meet Keira!’ he says to Ciarran and Conga Line Brittney. ‘Of course, if she’s mean, I’ll come right back to you, Brittney.’

‘Nice to know I’m your second choice,’ Brittney says icily – Brittney! who laughs through every single thing she says! – and stalks away.

‘Mate, what was that?’ Ciarran says, as they’re joined by Timm.

‘What was what?’ Jamie says.

‘Dude, you need to cut Brittney off if you’re not interested in her,’ Timm tells him. ‘You’re stringing her along.’

‘I don’t think I’m doing anything wrong,’ Jamie says blithely. ‘Maybe I’d like to take Renee on a date.’

This gets back to Brittney almost immediately and she stalks back in to say, ‘nice to hear I’m your third choice,’ before stalking back out.

There’s a few things to note here. Mostly it’s the fact that Jamie is either clueless or malicious or a combination of both; but also, this is the first hint we’ve really had of the Timm and Ciarran we saw in The Bachelorette, who seemed to have a solid sense that women are people with feelings. Remember when they just seemed… nice? Sigh.

That night, there’s another definitely-not-MAFS dinner party. (Sidenote: I’m genuinely curious how long it took the contestants to be able to utter the phrase ‘Bula Banquet’ without laughing.) Two things I want to point out about this before we dive into what actually happen:

…ahem. I care about the red wine question slightly more than I thought I did.

There’s three sets of discrete drama that arise at/after this dinner party, provoked by the set of questions, which are mostly about who’s giving roses for romance reasons and who’s giving them for friendship roses.

‘CAN YOU JUST TELL HER?!’ basically the whole table demands.

This is all very triggering for Alisha, because it brings back memories of last year when she and Jules were hanging out under the umbrella of ambiguity. She starts crying, which Keira sees, leading directly to…

KEIRA: BABE, I HEARD YOU WERE TALKING SHIT ABOUT ME?

KEIRA: *is that Mariah Carey I don’t know her gif*

ALISHA: You did some super mean commentary about me –

KEIRA: I DON’T KNOW YOU AND I’VE NEVER BEEN MEAN IN MY LIFE!

Alisha: A bunch of people called you out for –

KEIRA: THEY WERE HARASSING ME! I DON’T KNOW YOU!

Then Glenn stepped in (remember, Glelisha is real) and effectively put in an end to the conversation, and Alisha was like, ‘I’ve never had a partner stand up for me before,’ and I was like, ‘ouch,’ and then I remembered that Glenn has become the biggest heartthrob on this show but he is also a man with a Southern Cross tattoo, and I descended into the ninth circle of existential despair.

Ciarran’s island girlfriend Jess is absent for the whole dinner party – it sounds like she’s got the illness that took Pagliacci Brittney out last episode – and this results in Ciarran just being very… Ciarran, as can be seen in the following chronological list:

Kiki (Richie’s season): had little screentime in her season, but has apparently been hooking up with Ciarran of late, so…

Honestly, Channel Ten needs to publish an Offical Instagram Explainer before each season of Paradise. It would make so much of the backstory so much clearer.