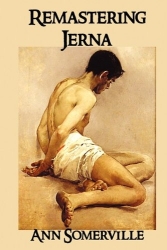 [Edited because my previous intro was highly susceptible to misunderstanding.]

Australian author Ann Somerville has, at times, been a controversial figure in some of the online romance communities I hang out in. I mention this up front because I get the feeling that a lot of readers will want to dismiss her work based on preconceived notions.

All I can say is that they’d be missing out on one of my most unexpected keepers of 2009. (And I’m not the only one who thinks so.)

Yes, the book starts a little shakily as Somerville sets up the protagonist, Jerna Setiq, a devoted husband, teacher and father of two, whose contented life is decimated when he’s falsely convicted of child perversion. Once the stage is set for Jerna’s emotional journey, however, Somerville gets it just about perfect.

In prison, Jerna endures a level of brutality that is magnified by the world in which Somerville places him. Serelto Prison is dehumanising; those in power are capricious. There’s no attempt at rehabilitation—prisoners are there to repay their social debts by working in the city. In order to be released, Jerna must pay his tariff of 30,000 riols, which means around 20 years in prison, given that most of the better paid positions aren’t open to child abusers.

Even worse, Jerna discovers how harsh life outside prison can be, and the only thing stopping him from committing suicide is the burden his debt would place on his family. Although I was braced for some shocking scenes, Somerville’s narrative isn’t gratuitous. Indeed, Jerna tries to block out much of the worst incidents, so we see the before and the after—not so much the acts themselves. Jerna’s psychological turmoil, his sense of helplessness and hopelessness, and his attempts to make sense of his situation were at once terrible and beautiful to read.

In despair, Jerna applies for a job at Winds of Paradise hotel, a high-end brothel ‘that catered to every legal sexual whim imaginable’ and one of the few residential positions open to prisoners. Although happily married, Jerna had previously been in a submissive relationship with another man, so he’s not easily shocked by the requirements of the job. Here Jerna finds the first bit of compassion in his new life.

I lay on my bed and worked hard to get my breathing under control. …I was a fully qualified whore now, and I made a silent apology to Tyrme. I’d have a lot apologies to make to her when—if ever—I saw her again, though I knew she’d forgive much greater sins.

…The important thing was today I had reduced my tariff by fifty riols (less the bloody interest), and that meant fifty riols fewer for my family to have to find if anything happened to me.

Despite the improved conditions, Jerna never manages to forget that he’s only 1 complaint away from being sent back to prison. The hotel’s rules are strict and customers’ needs come first. Jerna is not allowed to say ‘no’ to any request—a fact that Somerville quickly demonstrates. Jerna manages to skirt these obstacles and is able to build up a regular clientele, at least one of whom comes to truly care for him.

Jerna quickly earns the respect of his co-workers, and soon he’s asked to participate in a one of the hotel’s monthly shows. Kare, one of the hotel’s owners and its chief hostess, asks for his submission and Jerna gives it to her in a spectacular way.

But it’s in the aftermath that I found Somerville’s writing most compelling.

…slowly, dimly, with sorrow, I realised it was over, the sweet agony had stopped, and the room had fallen silent save for the laboured sound of my breathing.

Somerville also provides a counterpoint in Zeila, the hotel doctor, who doesn’t understand the appeal of ‘this mistress and submission nonsense’ and can’t see past the physical pain it inflicts on Jerna.

…and pain as pain

Jerna’s performance invites the attention of one of the hotel’s most difficult clients. Jerna is told that Tolomi is competent but has not been satisfied with any of the hosts he’s been with. Their encounter came as a shock to me, having been lulled by the care Jerna had previously received as a submissive.

It was unpleasant and humiliating, and there were tears as much from rage as from pain in my eyes by the time he stopped.

…He did make me scream, but there was no pleasure in it for me. I could never lose myself in the pain, nor did it arouse me.

By the end of this scene, Somerville has cleverly set up 3 contrasting situations—humiliation at the hands of callous employers and guards, submission freely given, and ‘domination by numbers’—and their differences couldn’t be more obvious.

Somerville doesn’t stop there, however. When Jerna makes a grievous mistake and is punished as a result—it was either that or prison—he reaches breaking point, and his collapse is heartbreaking.

From this point on, Somerville shifts her focus slightly away from Jerna as a submissive and explores the role—‘the craft’—of a master. It’s difficult to provide much more detail for this part of the story because it involves a spoiler I’m reluctant to reveal—yes, the romance bit. I’m not normally shy about giving out spoilers, but in this case I’m erring on the side of caution. (You can email me if you really want to know. But … do you really want to know? It’ll be worth it to read the book properly, I promise! And that’s from someone who usually reads the back of the book first.)

This is no BDSM-lite story. Jerna’s pain—and pleasure—feels real, his emotional responses even more so. But Somerville is a skilful guide. She builds on each scene, adding a little more pain and a little more emotion, inviting the reader to trust her so that some of the most challenging scenes become not only tolerable but deeply romantic.

And love in between

So my main problem with Remastering Jerna is the happy ending. First of all, this isn’t a conventional romance. Somerville does come up with an ending in which Jerna, his wife and his lover find happiness, but it’s suspiciously convenient and somewhat rushed. It would probably help not to think of Remastering Jerna as a romance because the plot structure and narrative style aren’t what you’d typically find in the genre.

Somerville makes up for it in the—dare I say it—climax of both the romance and Jerna’s sexual exploration with his lover. I held my breath at times, it was so glorious.

Remastering Jerna’s plot and characters are carefully developed, and the book’s underpinning ideas of consent, submission, domination and, to some extent, love are explored from different perspectives, giving the story layers of meaning that I don’t feel I could fully appreciate from just the one read. This is definitely a keeper.

A review copy of Remastering Jerna was generously provided by the publisher, P.D. Publishing, an LGBT publishing house. The self-published sequel, Games & Consequences, is available via Smashwords, with profits going to the Haitian Earthquake relief.

This review is part of the 2010 Aussie Author Challenge.