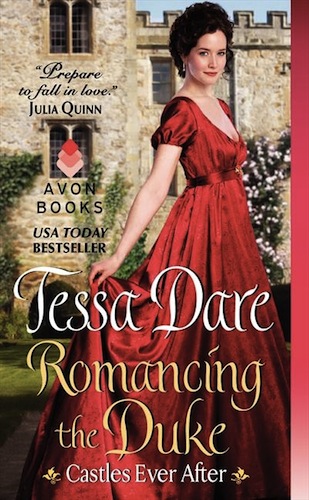 A funny, humorous read. Just when you think the heroine will follow a romance trope, she turns it on its head.

Izzy Goodnight’s father was a well known author who published a much beloved serial in the papers with a fangirl/boy following. (Yes, this is a historical novel.) When he died, he left her with nothing. Suddenly, she receives a summons informing her that she’s been bequeathed an inheritance, which turns out to be a castle. Except the castle already has a resident in it—Ransom, the Duke of Rothbury, and his giant wolf. Ransom is a cranky, bitter recluse due to an injury sustained in mysterious circumstances.

My first image of Ransom, in my head, was of Fabio hanging out with the cute giant Alaskan Malmute from our local coffee shop. He is gruff and brooding,and he just wants to be alone after his accident. The castle is the only thing he still has and he is pissed to find someone who wants to take it from him. Izzy slowly chips away at his exterior and her persistence eventually wins him over.

I liked Izzy—she was generally realistic about her circumstances and worked to make the best of her life. I liked that she isn’t your ordinary heroine but isn’t overly spunky. Her reaction to her first kiss from Ransom is priceless and unconventional. Just when you think she’s going to follow a romance trope, she kind of twists it around to make it her own.

This is a fun and funny book. Izzy’s father’s fan club injects much hilarity into their encounters, and Ransom’s attempt to first avoid then finally try to understand the phenomenon that is Izzy makes it even crazier. Having medieval-dressed lords and ladies trying to get Ransom and Izzy to repeat lines from the book or trying to find out the ending to the series made me wonder if J. K. Rowling went through this sometimes. And yes, as a geek I found some of the fan moments kind of relatable, though I don’t think I would follow what appears to be the equivalent of a modern soap opera with such tenacity (in a carriage with horses, all over England, in costumes!).

I have been reading Tessa Dare for ages, and while I haven’t always liked all her books, I generally make an effort to give them a go because I can count on her for a fun read. While reading this one I looked up her backlist and didn’t realise she had written that much—it seems like I just reviewed Goddess of the Hunt.

I would recommend this for those looking for a funny, humorous read. A good start to a new series.

Who might not enjoy it: People who don’t appreciate cosplay