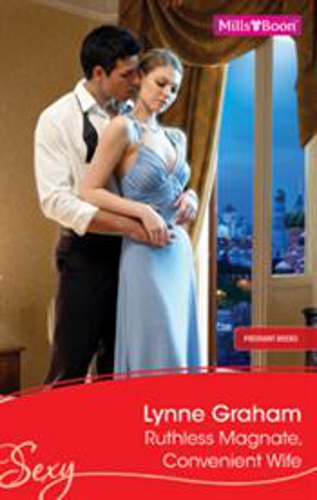 Back in my 20s, I would have loved this book. This may be spoilery to some readers—although if you regularly read in this Mills & Boon line it would amaze me if any of this surprises you—but Ruthless Magnate, Convenient Wife features a tycoon hero who borders on misogyny, a contract marriage, a virgin heroine, an accidental pregnancy and a Small Misunderstanding.

But as far as these things go, Lynne Graham does a decent enough job with the plot. Sergei Antonovich was saved from a troubled childhood by his grandmother, and as she gets older he wants to give her what he knows would make her happy—a grandchild.

As you do when you’re insanely rich but scarred by a money-grubbing first wife and young hotties forever flashing their cleavage in exchange for your wad (of cash, people!), Sergei sets up a business arrangement to acquire a wife and child.

Alissa Bartlett discovers that her identical twin, Alexa, entered an agreement to marry a rich Russian guy—in Alissa’s name. Their mother desperately needs the money, and when Alexa can’t go through with the bargain, Alissa reluctantly agrees to fulfil the obligations of the contract.

Graham tries to give Alissa a little more backbone that your typical mistress-but-for-the-marriage-contract heroine. Despite her attraction to Sergei, she’s indignant when he assumes she’ll just make out—and eventually have sex—with him as he pleases. Unfortunately, Alissa tips into TSTL (too stupid to live) territory when she fails to read the contract that her sister signed. Wouldn’t that be the first thing you do before agreeing to go through with a contract marriage? Heaven help her if she ever decides to take out a mortgage.

Anyway, she’s in for a very rude shock when she learns that pregnancy is part of the deal. Sergei is equally shocked and angry at being duped, and his only capitulation is to hold off on the baby-making while emphasising the mistress part of the bargain.

It all comes to a head in a big dramatic scene where Alexa goes completely loopy—seriously, I couldn’t believe she and Alissa were related, let alone twins—the Small Misunderstanding is resolved and the epilogue gives everyone what they so clearly deserve, with the possible exception of Alissa’s dad.

All this while I was sitting in a bus, stuck in peak-hour traffic. That’s what category romance is for.

Who might enjoy it: Readers who also enjoy daytime soapies