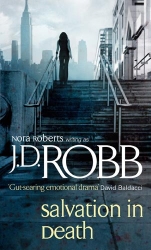 With 26 earlier books in J. D. Robb’s In Death series, I had a pretty good idea of what to expect from Salvation in Death and Robb delivered on all counts.

Eve Dallas is a homicide lieutenant in the New York Police and Security Department in 2060 and each book contains a case for her to solve, while juggling issues from her past and the roles as wife to multi-billionaire/owner of damn near everything under the sun/Irish sex god Roarke and friend that confuse her on a daily basis.

Father Miguel Flores was performing a funeral service when he dies in front of the grieving family from cyanide poisoning after drinking sacramental wine. Signs of a tattoo removal and plastic surgery as well as a silver medal inscribed with the name Lino suggest that the victim wasn’t really a priest. Eve has to find out who he really was and why he chose this particular parish to minister, in the hopes of finding clues to his murderer.

A televangelist who regularly hits the vodka and cheats on his wife takes a drink from a vodka-laced bottle of water onstage and collapses dead in full view of his audience. Eve’s computer indicates a high probability that both murders are linked, but Eve’s not convinced.

What made this particular case so compelling was the way it challenged the concepts of good and evil people by starting off with the public murder of a priest. I can’t say much more than that without spoiling the story, but I will say that by the end, things aren’t black and white and Eve and her team are placed in an uncomfortable situation when they sympathise with the murderer.

All about Eve … and Roarke

Robb manages to keep the series fresh for such a long time by blending new and interesting homicides with the familiarity of Eve’s struggle to understand the rituals of marriage and friendship. Eve herself is an intriguing mix of competence and confusion, with the way she finds opportunities to kick arse several times daily (and relish it), her insight into how and why crimes are committed, her tender and savage love for Roarke and vulnerability in adjusting to having a large and close-knit group of friends.

She is well matched by Roarke, a phenomenally successful modern-day pirate with his own insight into criminal behaviour and the intelligence, passion and ruthlessness to manage Eve when necessary, like when she has a headache and refuses to take a pill or when she skips a meal while working. He is manipulative in the best sense and is the velvet glove to her iron fist.

One of the highlights of this series is the connection between Eve and Roarke. Although the cop and the criminal seem like opposites, they both share a strong moral code, even if their morals don’t absolutely mesh on all points. They both survived an abusive past and although it has made them who they are, they have grown from it instead of perpetuating a cycle of abuse. They just fit together and although Roarke would be the first to disagree, it seems like Eve has the better end of the bargain.

Roarke frequently helps Eve by listening to her talk a case through, offering insight or resources and looking after her better than she would look after herself. Eve has willingly helped him when he’s needed it, but he seems to need less from her than she does from him. He has the strength to maintain his own interests outside of their relationship and understands when Eve is absorbed in hunting a killer, even admires her for it. Their relationship reminds me of a quote by Sam Keen: ‘You come to love not by finding the perfect person, but by seeing an imperfect person perfectly.’ Roarke is much more together than Eve, who is brilliantly flawed, but each provides the home and family the other has always needed.

Each book is peppered with sympathetic secondary characters whose lives and relationships typically evolve along with Eve’s throughout the series. Her partner, Detective Delia Peabody, is quite relatable (to me, at least) with her enjoyment of food that’s not quite equalled by her metabolism, subsequent desire to be thinner, and her steady competence. And there’s Roarke’s majordomo and Eve’s nemesis, Summerset, who picks on Eve for her relative uncouthness while she colourfully criticises him for being stuffy, ugly and bony, but they sheathe their swords over their shared concern for Roarke.

It’s the personal moments, soft without being sappy, that provide a contrast to the rough edges of the bustling, impatient New York city lifestyle and criminal element. But what sets this book apart from others in the series is that there is substantially less development of the secondary characters even though a few of them are present in the story. Also, it’s extremely rare to see Roarke uncomfortable, but discussion of religious beliefs and practices leaves him somewhat adorably flustered.

Robb is able to effectively balance Eve’s life off the clock with the headway she makes on her case, although her cases affect her personally and the series wouldn’t be as enjoyable if Eve wasn’t the cop and woman that she is.

The only thing I didn’t like about this particular story was how the victim was transformed from a man of God who was an asset to his community to such a polar opposite. Even if he hadn’t been an ordained priest, couldn’t he have repented or felt some remorse for the mistakes he made? While nothing would change who he had been before he took on the priest’s identity, couldn’t his new life have influenced him to become a better person? I kept wanting him to be better than he was and think it could have been realistically accomplished within the framework of the story. It felt like Robb made too deliberate an effort to make him as anti-priest as possible with only 2 arguably redeeming features, at least 1 of which contributed to his downfall.

Although I insist on waiting for the paperback editions of the books in this series, don’t be fooled by the fact that this isn’t quite the most recent in the series. Like Janet Evanovich’s Stephanie Plum books, I have to store up at least 2 books to get my fix and even then I wish the next book would hurry up and get published.

Each book is well-written and well-paced, and even if I sometimes predict the murderer, there is always more to the story than I saw coming. Despite my problems with the treatment of the victim’s true personality, I enjoyed the conflict Eve’s team felt between upholding the law and doing what they believed to be just.

This review was based on a copy of the US edition of the book. Salvation in Death is published in Australia by Hachette.

Books in the In Death series (UK/Australia)