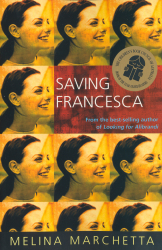 Not to to be effusive or anything, but this is the book that began my love affair with Melina Marchetta’s books.

When I read fiction, regardless of genre, I automatically seek a sense of connection with the words on the page. Sometimes a scene will get me, or a character, or a turn of phrase. I long for these moments of empathy that can turn an otherwise forgettable book into a treasure in my bookshelf.

Saving Francesca gives me diamonds on every page.

Francesca Spinelli is one of thirty girls at St Sebastian’s, a previously ‘all-boys’ school that has opened its doors to girls in Year Eleven for the first time ever.’ She misses the feeling of belonging she had at her old school with her old friends:

St Sebastian’s pretends it’s co-ed by giving us our own toilet. The rest of the place is all male and I know what you’re thinking if you’re a girl. What a dream come true, right? Seven hundred and fifty boys and thirty girls? But the reality is that it’s either like living in a fish bowl or like you don’t exist. Then, on top of that, you have to make a whole new group of friends after being in a comfortable little niche for four years. At Stella’s, you turned up to school, knew exactly what your group’s role and profile was, and the day was a blend of all you found comfortable. My mother calls that complacency but whatever it’s called, I miss it like hell.

To make things worse, Francesca’s mother, Mia, has had a breakdown, and as Francesca struggles to make sense of who she is in her new school, she has to find a way to define her family when its most dominant personality is suddenly silent.

Francesca is nominated to represent the girls and argue for improved conditions. When Will Trombal, one of the House Coordinators, urges her to tell the girls to go with the flow and acts dismissively, Francesca can’t help but put him in his place.

This first act of defiance seems to trigger a spark of rebelliousness. Francesca turns ‘into a delinquent’ when a teacher fixated on rules and punishments gives her a week of detentions for failing a butcher’s paper exercise. And she begins to question whether her old life at Stella’s had been as good as she had thought.

Because it’s a Melina Marchetta book, there’s also a bit of romance thrown in. I wasn’t a fan of Will at first, but the antagonistic attraction between him and Francesca was just too thrilling—and too close to how I remember high school being like—to resist:

I so don’t want to be attracted to him and the fact that I am surprises me. Sometimes when I get home I convince myself that I’m just romanticising anyone who’s actually spoken to me, but then I see him the next day and my heart starts beating fast and I can’t really kid myself… When he looks at me he must see the annoyed look on my face because I get the same annoyed look back. That’s how I feel. Annoyed that I like him.

Saving Francesca doesn’t have vampires or werewolves or kick-arse heroines. It’s about a bunch of teenagers on the brink of adulthood coming to terms with who they really are and attempting to define the foundations of their lives.

The backdrop for Francesca’s year of catharsis is St Sebastian’s, where Marchetta seems to have distilled her experiences as a Catholic school teacher to produce teachers, students, activities and attitudes that, I daresay, anyone who ever went to a co-ed Catholic school in Sydney will find familiar.

The story is narrated in the first person, and there’s a sense in which Francesca kind of lives in her own head, but Marchetta surrounds her with a cast of supporting characters who, although they touch on some stereotypes, are complicated, individual and just so damn interesting—including the adults.

When Francesca and her girlfriends, for example, are told that the boys call them Bitch Spice, Butch Spice, Slut Spice and Stupid Spice, they’re hard pressed to determine who exactly is which:

‘There is some possible overlap here…’

‘No. Not possible. Because what would that make me? I’m not stupid, nor am I bitchy,’ Siobhan says.

‘Siobhan, you’re the whole spice rack as far as some people are concerned’…

Or when Thomas Mackee, the cause of the butcher paper detention, says something that makes Francesca feel good, she thinks that ‘deep down he is a sensitive guy, who sees us as real people with real issues’ except that as she’s practicising, in her head, how to thank him, he goes on to ogle at some girl’s boobs.

I couldn’t put this book down. Even after I was done, I had to go back and read it a second time. Then again. The only way I could stop reading it was to buy another Marchetta book to pore over.

Saving Francesca encapsulates everything I love about Melina Marchetta’s books. Her young characters are passionate, mercurial, unrestrained, vulnerable, compassionate and defiant. Despite her characters’ missteps and conflicts, Marchetta conveys an underlying sense of optimism about the younger generation and confidence in their resilience.

She also gets their voice. Take this conversation between Francesca and her friend Justine, who has a crush on a tuba player she met at a school band three years ago:

‘Have you ever spoken to him?’

‘He looks at me at the bus stop. Sometimes I’m on the bus and it drives past his stop and we have eye contact.

I think about it for a moment. ‘I had a bus-stop relationship for four years at Stella’s.’

‘The Boy From The Bus Stop.’

It was like being in my late teens all over again, except mine was called The Guy In Grey and it was a train-carriage relationship.

In which I attempt to create balance in this review

Lest you think I can’t see the dirt past the diamonds, I had some (very minor) issues with this book. First, I think the book needed a few more scenes showing Francesca with her parents, just to balance out the amount of time we see Francesca at school or with her school friends.

Also, ‘Filipino’ and ‘Filo’ are misspelled on page 98, both in the reissue and in the original edition, which I borrowed from the library. (Interestingly, Chachic of Chachic’s Book Nook tells me that it’s spelled correctly in her copy, which was published by Knopf Books for Young Readers.)

And finally, I find the cover of the reissue a step down from the original. It’s a nitpick, I know, but another Marchetta fan mentioned this to me, so I think it’s worth whingeing about commenting on.

This is just about the perfect YA novel, as far as I’m concerned. The characters feel like real people, reflecting the language and sensibility of the inner suburbs of Sydney, and the story accurately depicts the experience of attending a systemic Catholic school. If you only read one Melina Marchetta book, read this one.

This book was first published in 2003 by Viking (Penguin Australia) and reissued in B format in 2006.

Other editions of this book