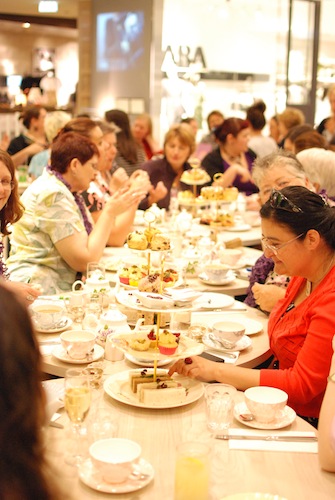 Highlights from the reader high tea with Sarah Wendell at The Victoria Room Tea Salon in Sydney.

I was going to begin this post with an undignified level of squeeing over the fact that not only did we meet Sarah Wendell, one of the pioneers of romance book blogging and reviewing (at least as we know it), but that we convinced her to eat scones and cucumber sandwiches with us. However, Vassiliki did such a great job with her recent post at Shallowreader that I’ll just invite you to go read her post and then come back here for some gossip. :D

We had over thirty people at the lovely Victoria Room Tea Salon at Westfield in the CBD, which exceeded even my most optimistic estimate, and ended up being split into two table groups adjacent to each other. I finagled a seat next to Sarah and finally met fellow romance readers that I’d only previously known through Twitter and blogs. We had people from Canberra and Wollongong, but top prize for effort had to go to Anna Cowan, who flew in from Melbourne for the occasion.

Thank you to everyone who came along and made the afternoon such a success! I heard lots of positive comments, and it really couldn’t have gone any better than it did. Most came in twos and some on their own, which I know would have been daunting, but whenever I looked around it felt like everyone was engrossed in conversation.

The discussions were dominated by books, of course, but also Tim Tams, scones and, on a grimmer note, the looming threat of Hurricane Sandy. I may or may not have been told of upcoming releases that I cannot wait to read. I also got the impression (from various sources) that ARRC 2013 could do with a lot more registrations. So if you’re planning to go, make sure you sign up sooner or later. (The earlier you pay, the cheaper it works out to be!)

Sarah whipped out her Kindle Paperwhite and passed it around to everyone who wanted to have a play of it. Let me just say, it looked pretty great. Once they hit Aussie shores, I’ll be there with my credit card. Anything that will help me read ebook review copies more easily has to be a plus. Interestingly, though, I saw other readers whip out their Sony Readers, so that seems to be the most popular alternative, at least for romance readers. Sara was also generous enough to come along with a huge bag of books—enough for at least one per person. Earlier, she had mentioned that she brought Julie Anne Long’s latest release, A Notorious Countess Confesses, the eagerly-awaited book featuring a hot vicar. So when Sarah whipped open her bag, grabbed some random books and headed to the other table I could feel the blood draining out of my face. Please don’t let it be the Julie Anne Long!

And when she turned her back on us—after inviting us to grab whatever book we wanted—I kind of put my hand in the bag and dug out the Julie Anne Long, the Katharine Ashe and the Sherry Thomas. What can I say? They were the first three that I grabbed…maybe. It’s like my hands are magnets for autobuy authors. It’s my unique superpower.

Wait, no. I didn’t keep them all. Come on. I shared (I knew that a couple of the people near me also loved these authors) although the Julie Anne Long might have caused a minor tussle via eye contact. I won, obviously, but I lost the Katharine Ashe. I’d call that a tie.

Author Michelle Douglas also came to high tea bearing books and, for a reader event, I really don’t think we could have asked for any more than that. One of the books she gave me is a Christmas-themed category romance, which I have earmarked for December reading. A few of us readers also came with books to give away, and I inherited Sylvester, my first Georgette Heyer, courtesy of the lovely Alexis. Before you gasp in shock, the only reason she parted with it is because her collection was falling apart and she’s replacing her books with newer copies. That there is true love.

At some point during the afternoon, we spotted Melbourne-based author Sarah Mayberry, whom we kind of gawked at until she noticed us and came over to say briefly say hi. (If you read Sarah’s blog, you might have realised that this was not entirely coincidental.) There was also much squeeing, at least for the people who happened to be at that particular corner of the venue.

A handful of us stayed around until closing time (thank you, thank you to the staff at the tea salon for indulging us), after which I hung around Sarah like bad smell because even though I couldn’t squee on the outside, I was in a fan daze on the inside, and I’m not even exaggerating when I say that talking to her was the easiest thing in the world. Also, we recorded a podcast. And she tried potato wedges with sour cream and sweet chili sauce for the first time. It was awesome.

If you’re feeling jealous, you totally should. But all is not lost because Sarah will be back in Australia next year as a guest speaker at the Romance Writers of Australia conference in Fremantle.

Next up is a recap of the parts of GenreCon that I attended. More squeeing and awesomeness to follow, so watch this space.

You can find more photos from the high tea event on our Flickr photostream.