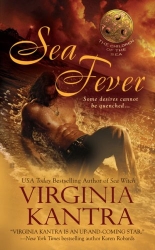 An interesting read with well-crafted characters.

Sea Fever is the second book in the Children of the Sea series by Virginia Kantra. I haven’t read the first book, but will probably be getting it soon. That said, there is enough information in this book to not leave you feeling left behind, and although there are references to the first one, everything necessary is explained well enough.

Regina Barone is an ex-aspiring chef who returned to her island hometown when she got knocked up by the head chef of the restaurant she was working in, a Gordon Ramsey-esque type who dumped her and ended up with his own TV show. She now works for her mum’s restaurant, has an 8-year old son, and is generally trying to make the most of what she has got. Her character is quite balanced, not with too many obstacles against her, or not trying too hard the way some authors make their characters angry grrrls that push back at the world because they’re so pissed off. In short, she’s normal.

Dylan Hunter is a selkie. For those unfamiliar with the legend, basically selkies are like seals, who shed their pelts to become human. These pelts are usually left hidden in the cliffs near the seashore and without them selkies cannot return to sea. Many years ago, Dylan left the island with his selkie mother, leaving behind his human father, brother and sister. After events that happened in Sea Witch (book 1), which I don’t want to elaborate on because technically they would be spoilers if you haven’t read it, his brother is getting married, and Dylan returns for the wedding after years away from the island.

Regina and Dylan meet on the beach at the wedding and, wham bam thank you ma’am, the sparks fly right away. Both of them think this encounter is the only one they will have, but Dylan is assigned by the selkie prince Conn ap Llyr to watch the island and his brother, to protect them from prophesied danger. So just when Regina thought that she could get the fantasy hot man that will never return out of her head, he walks right into her restaurant.

What I liked most about this book was how they fell in love. It wasn’t sudden or surprising, it wasn’t instant, and despite the electricity of the love scenes (which are great, btw) it wasn’t driven by the sex. You could actually see them, especially her, trying hard but gradually failing not to fall:

Regina was a practical woman. She might have resisted Dylan’s sulky good looks and sneering humor. She could have suppressed her sympathy for his wounded childhood, her helpless response to his stormy passion. Over time she might have even gotten over his talent for showing up at exactly the right place at the right time. But his awkward consideration destroyed her defenses.

Dylan also doesn’t realise that aside from the pull of the sea that comes from being part selkie, there’s also that pull towards Regina, one that he tries to resist without even knowing it’s there. For me this struggle between him and their movement towards love was the real story of this book, even if, given all its paranormal elements, he had to save her from something.

The characterisations and interactions of this book are its real strengths, from Regina’s relationship with her cranky mother and her son, to Dylan’s fledgling relationship with his brother–who, without reading the first book, you can tell is the quiet, responsible, dutiful one–and his estranged father’s attempts to somehow explain the past.

The paranormal plot of the book fits in with the story and, I would assume, with what happened in book 1. This part of the story is left somewhat unfinished, which makes sense given that there’s a book 3. I like the use of the selkie mythology and the different elements (water, fire, air, earth) and how they fit into this part of the story–so far I haven’t read anything like it. I would recommend this book for the interesting read and well crafted characterisations. I am looking forward to the next book.

This book is part of the What’s In A Name? Challenge (medical condition).