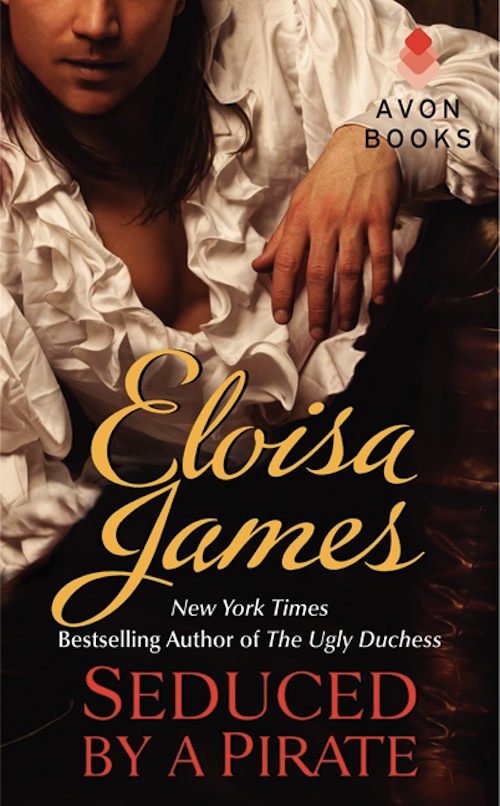 A novella that has a certain sweetness that I’ve come to expect from the Eloisa James’ fairy tale series. One for readers looking for a quick read. Oh, and pirates—arr!

Sir Griffin Barry is an ex-pirate turned privateer pardoned by the crown. He’s back home after 14 years—he ran away after getting married at 17, got drunk and found himself press ganged into a ship, became a pirate and later named his ship ‘The Flying Poppy’ after the wife he left, and began an ‘illustrious’ career. After a near-death experience with his BFF, James (the Duke in The Ugly Duchess), he’s back in England, pardoned, retired from piracy and determined to win his wife back.

So off to the country he goes, to win back his Poppy. Except she doesn’t want him back. Oh, and he got her name wrong. It’s really not Poppy.

This novella is sweet and charming. I liked Griffin—his past and the reason he left his wife were, to me, perfectly understandable. I mean, if your father ‘dooms’ you to marriage at 17, and you run away after the wedding to get shit-faced drunk, well, I get that. That you get press ganged and then become a pirate and then don’t come home for 14 years—well, I’m glad you finally grew balls and came home in the end.

Griffin is charming and funny and I liked his efforts in trying to regain his life. He’s not in denial and knows that, in coming home, he has to evolve into a different person. Despite this being a short story, Eloisa James is able to demonstrate Griffin’s development as a character.

Poppy, as we’ll call her for now, starts out being a bit conservative and wary. This was also understandable—when her husband left her 14 years ago, she was left to take care of things on her own and then had to deal with her parents dying. She shows real gumption and, given the circumstances and the time period, I was actually proud she had the guts to ask Griffin for a divorce. I don’t think that’s something most women could’ve done. Because this is a romance, Griffin persuades her very quickly otherwise, but she, in contrast to him, knows what she wants in life, and tries to get it. (Later, of course, she decides she wanted him in her life, too.)

The biggest issue I have with this story—and possibly with the Ugly Duchess as well—is how pirates are made out to be really honourable; they don’t make people walk the plank, they only attack other pirates or slavers, and they don’t hurt women or children. Okay, maybe the first and last things could’ve happened, but I don’t believe that pirates, even when they become privateers, wouldn’t attack other ships just for money or just for ‘honourable’ reasons. Historically, if I recall correctly, most privateers were given commissions to attack merchant ships from countries their countries were at war with, so really, that doesn’t make them any more morally superior to pirates. I guess James was just trying to make them seem more heroic and, well, nice.

This novella (I read this in a few hours—at work, no less!) has a certain sweetness that I’ve come to expect from the James’ fairy tale series. Although related to The Ugly Duchess, it can be read on its own.

Who might enjoy it: Readers looking for a strong, sweet and very quick read

A review copy of this book was generously provided by HarperCollins via Edelweiss. Note that Eloisa James’s novels in this series are published by Hachette in Australia; however, this novella is not listed in the Australian publisher’s catalogue.