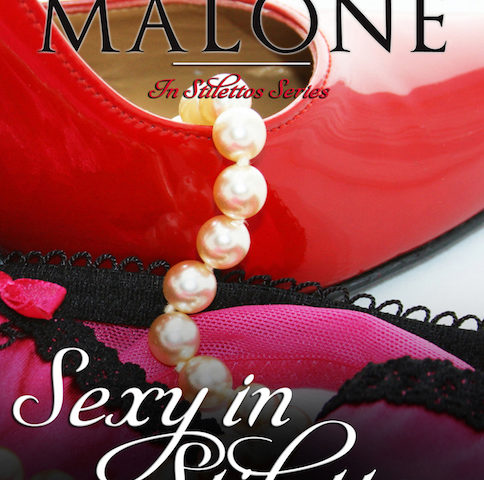 Review of: Sexy In Stilettos You know that nightmare you have where you’ve been fired? And you’re trying to leave with your dignity intact, but instead you start crying? And then run SMACK into a hot dude as you get in the elevator? While crying? Yeah. That is literally the opening scene of Nana Malone’s Sexy In Stilettos. But if you can get past the fremdschämen of the first chapter, it’s so worth it!

In what is likely the most common but also the worst decision ever, Jaya Trudeaux deals with her newly unemployed status by indulging in a ridiculous level of retail therapy. Like, really ridiculous. She buys herself a pair of Christian Louboutin stilettos. Seriously, these things can retail for literally THOUSANDS of dollars.

Luckily, Jaya has two of the most fantastic friends with the same shoe size, and they decide to each chip in and share the shoes.

“No. They’re too beautiful for Craigslist. Besides, I would only get a fraction of what they’re worth.”

“Fine.” Ricca breathed. “Then I have a solution, but Micha’s going to have to agree to it too.”

“What?” Jaya eyed her dubiously. “If it involves becoming a shake-your-booty-ho to pay for them I’m not interested.”

Ricca rolled her eyes and giggled. “How about we share the shoes?” Jaya frowned, but Ricca continued as if she hadn’t noticed. “We borrow everything from each other already. Why not do a footwear time-share?”

To celebrate this fantastic solution to the ultimate buyer’s remorse, Jaya and her friends decide to hit a club where Jaya can break in her babin’ shoes. Which is where she runs into the dude from the elevator. Again.

All of his tall, dark and delicious frame paused at their booth. “I got tired of waiting for your to come to the bar, so I figured I’d brave the crowd.”

The velvet voice melted into her centre making her core contract. The broad ched didn’t help either. Talk about sexy, make-your-panties-drop kind of body. She whipped her head up to meet his gaze.

If anyone asked her later, she would swear up and down she tried to form words — Intelligent words. Instead, all she managed was the flap-jaw routine. Open, close. Open, close.

“Cat got your tongue?” He grinned at her.

Clutching his hand to his heart, he added on the extra charm. “I’m wounded. It’s worse than I feared. You’ve forgotten my name and my face.”

Alec Danthers is all kinds of charming, and is incredibly attracted to Jaya. But he’s also a love-em-and-leave-em kinda guy, who never really stays in one place for longer than a few months. In fact, the only reason he’s even in San Diego is so he can track down his wayward little brother, at the request of his stepmother.

This is very definitely an opposites attract kind of romance. Jaya is solid and steady, and by her own admission incapable of doing anything without first making a list. In contrast, Alec is the original rolling stone. He has very few stabilising influences in his life, and is very happy to keep it that way. Together they’re all fireworks.

The one frustrating thing for me was that there’s so much going on in this book, plot-wise, but the emotional payoff isn’t always there. Jaya and Alec both have fraught relationships with their families that are dangled at you. But because those relationship do drive their motivations in very real and very understandable ways, I really wanted to more solid resolutions on all those fronts. That said, the emotional payoff is definitely there when it comes to the romance.

Back in the day, I used to read A LOT of Carly Phillips, and Malone’s style feels really similar to that, but fresher. Sexy in Stilettos is light, fun, sexy, and has a rich old maternal figure pulling everyone’s (especially the hero’s) strings while maintaining her dragon-like status.

Anyway, for those of you playing along at home, we’re definitely looking at this series as the Sisterhood Of The Travelling Stilettos. Which, let’s be real, I’m totally here for. In fact, I’m so here for it that I may be up to the third book in the series.

Content advisory: You may be inspired to go out and buy new shoes. The frivolous kind. Be very sure your budget can handle it. Or that you have a couple of friends with the same size feet, willing to go in on a footwear-timeshare with you.

Self-published. You can find the author at nanamalone.com.