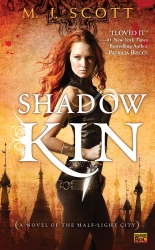 When Shadow’s attempt to assassinate a sunmage fails, she knows she’s in big trouble. First, there’s her boss, the Blood Lord Lucius, for whom failure is punishable by death…or worse. Then there’s Simon, the sunmage, who persuades Shadow to betray Lucius.

Shadow is a wraith, and all her life Lucius’s protection—such as it is—has been her only sanctuary. It’s also a dark prison she’s desperate to escape, and Simon’s offer of protection is the first real chance she’s had since her Fae family abandoned her to the Blood Lord.

The story gets off to a fantastic start—fast-paced and intriguing, with a kick-arse but vulnerable heroine. Perfect urban fantasy fodder, and I couldn’t put it down. Debut Australian author M. J. Scott sets up an intriguing world featuring vampires, demons, fae, mages, Templars and more. Shadow Kin is the first book in the Half-Light City series, and Scott introduces political and cultural tensions, as well as mysteries that will no doubt be more fully explored in later books.

There are moments of violence, but also of intimacy. Surprisingly, some of the most intense scenes are between Shadow and Lucius—the kind that sends chills rather than thrills down the spine.

POV-sensitive readers will have issues with how Scott has chosen to shift the narration between Shadow and Simon. Changes in the narrator are marked by sun and moon symbols, but  they can be awkward. Both narrators use first person, which makes the some POV shifts bewildering.

The real problem is that there isn’t a compelling reason for Simon’s point of view, other than to reveal parts of the plot that Shadow has no knowledge of. The payoff isn’t worth it, because not only do shifts to Simon’s POV affect the story’s pacing, Scott fails to capitalise on Shadow’s deeper internal conflict by being in the wrong head at the wrong time.

The story also suffers from that perennial paranormal romance weakness of sappy endings. Scott does better than most, but it still niggles, especially when compared with the polish of the story’s beginning.

When I first met Scott at last year’s R*BY awards dinner, she had just signed her first book contract, so I’ve been looking forward to Shadow Kin for over a year now. It was worth the wait.

Who might not enjoy it: Those who refer to themselves in the third person

An e-galley of this book was generously provided by Penguin USA via NetGalley.