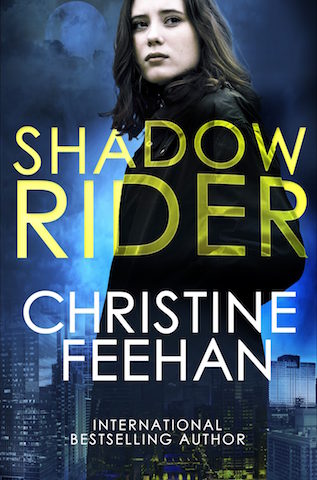 Sets up an interesting new supernatural family, but the way the hero treats the heroine is problematic. Sets up an interesting new supernatural family, but the way the hero treats the heroine is problematic.

First in a new paranormal romance series, Shadow Rider sets up an interesting new supernatural family and creates the sense of community usually found in small town romance in downtown Chicago, but the romance was quite problematic, with inequalities between the partners unsubtly exploited.

When we meet Francesca Capello, she has moved to Chicago, where her last remaining friend, Jessica, intends to set her up with a job and help her start over. Francesca witnessed her sister’s rich boyfriend murder her sister and left town after he systematically destroyed her credibility, cost her employment and friends, and sent her broke, so her sense of self is at an all-time low.

Stefano Ferraro is the head of a famous and wealthy family often suspected of involvement in organised crime, but is actually a shadow rider, a paranormal vigilante who travels through shadows so a connection to his targets can never be proven. He also takes responsibility for the wellbeing of the citizens of his neighbourhood, where he rules as a throwback feudal lord in the modern day.

He meets Francesca as she walks along his street, and their shadows touch. He feels an instant connection with her, and recognises her as a woman compatible with him as a shadow rider and capable of bearing his children. Shadow riders and compatible potential partners are few and far between, so any relationship between them is subject to extra pressures beyond their socioeconomic differences and Francesca’s problem, because her existence gives hope to other shadow riders that they might also meet someone and fall in love.

Stefano immediately takes an interest in Francesca’s wellbeing, forcing his coat and a wad of money on her, as well as a team of bodyguards without her knowledge, which is just as well, because she is a trouble magnet. She tries to maintain her independence, at times to the point of foolishness, but after having almost everything taken from her, I can understand why she wants not to rely on anyone.

I found Stefano to be incredibly heavy-handed, and Francesca tried to be a modern woman and set boundaries, bless her, but they tended to be overruled and eroded, to the point that I was concerned about how healthy the relationship was going to be. I thought it was a starting point for character development for them both, and an obstacle for them to overcome in order to be together. Um, nope. At an early stage in their relationship, he pressured her for a commitment, but insisted that once she did commit, she couldn’t take it back. Meanwhile, she had so many questions about what he does for a living, if he is involved with organised crime, and how he could be satisfied with someone ‘normal’ after having been photographed with the most beautiful celebrities.

They’re on a date at the local pizzeria, where Stefano is approached by an elderly citizen from his neighbourhood requesting his help with a family matter. While she speaks to him, he starts sucking and nibbling on Francesca’s fingers. In public. In front of an old lady. And he wouldn’t let her pull away, despite her obvious discomfort with the situation.

He knowingly forces her into a confrontation with her sister’s killer by inviting him into their home without discussing it with her first. Did I mention the douchebag killed her sister right in front of her?

Stefano wants Francesca to quit her job to be more available to him, and after she refuses, he places her in a position where she is forced by her conscience to quit so her boss can hire someone more reliable. Stefano wins again. He agrees with her that she won’t be a kept woman, but still wants her place to be in the home and the kitchen, cooking for him and taking care of their children, all the while financially dependent on him. But she wouldn’t be a kept woman, oh no, of course not.

When the lies of Francesca’s sister’s murderer reaches their neighbourhood, Stefano’s brother is conveniently and so very fortunately on hand to tell her to pull her shit together because her public reaction has the power to undermine Stefano’s position, so her problems aren’t about her anymore. It’s all about Stefano.

And don’t get me started on the sex. By her own admission, Francesca has only had sex once before and didn’t get off. But from the moment Stefano binds her hands, she loves every fast, rough thing he does to her. He uses her several times a day until she is sore, but she never seems to need much of a break, nor does she get one. If you’ve read some of my earlier reviews, you’d know I don’t have anything against bondage in sex scenes, but the intensity, particularly when coupled with her inexperience and her hesitation towards him in other areas, just doesn’t ring true to me. Their relationship feels like all the trappings of a D/s arrangement, but without the informed consent and regular negotiation you would normally expect.

I wanted to like their romance more. I saw great potential in Stefano because he did care about Francesca, at least in his own way — he did bring about massive improvements to her life and safety, his job is to protect people who truly need it, and he takes his responsibilities seriously. Maybe I can’t expect him to allow his partner to actually be his partner with any kind of autonomy when he was born into a life that was never really his. But that’s not healthy for either of them. Maybe author Christine Feehan let both sides of her couple down.

She’s written heroes I couldn’t stand, like Zacarias De La Cruz from her Carpathian series (Dark Predator), but I’ve always loved when she writes about more truly supportive men, like Dominic Dragonseeker (Dark Peril) or Razvan from Dark Slayer. Stefano is a bit too close to the Zacarias end of the spectrum for my taste.

Shadow Rider wasn’t a bad book; it was just a problematic one when it came to the treatment of its heroine. And I’ve often been described as a hero-centric reader. That aside, it created a warm sense of community, set up a very interesting socialite vigilante supernatural warrior premise that I’d like to see more of, and supporting characters who definitely deserve books and romances of their own. I’m just hoping for a bit more balance and a stronger emotional connection in those books.

You can find an extract of the book here. Published by Piatkus (AU) and Berkley (US).