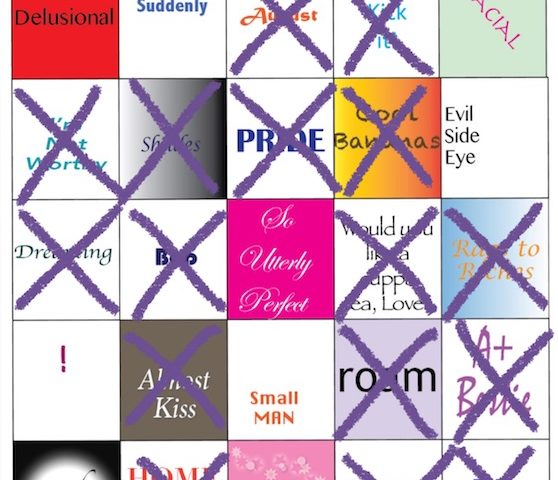 Bingo! I was too late to win this month, but I got that final square to lock in 5 squares in a line. Yass!

Bingo! I snuck in one extra square last night to finally complete a column in the August #shallowreaderbingo card. I'll post the titles and links on the weekend. The September card should be up soon on Shallowreader.

This reading challenge is open to all and sundry. Join or follow along at Shallowreader.

Unlike my June card, most of my August squares were hit through books. Here we go…

This book was recommended by Courtney Milan on Twitter, and I can’t even explain how thrilling that has been for the Filipino romance writing community. Beginner’s Guide features an introverted science researcher heroine who tries to find a boyfriend by conducting an experiment based on the optimal stopping theory (also known as the Bonk Rule). This book hits the X square, because Kaya needs to line up 10 dates for her experiment. It also hits the A+ bestie square because her best friend isn’t just her equally smart lab partner Eugene Villaflor, ‘metaphorical fairy godmother and friend to all those in need.’ I love that the heroine’s best friend is a guy, but also that Eugene accepts and understands Kaya as she is and gently nudges her when she gets too caught up in her own world:

“You probably didn’t notice, but Nero indirectly called you beautiful at least three times tonight. Maybe that’s something to consider.”

The heroine of the series finale for the Chance Sisters is Daisy, an orphan who worked in a brothel (as a seamstress) and baulks at the thought of being a lady. Instead, her ambition is to be the most sought after dressmaker to ‘rich nobs’. This book hits the Rags to Riches square dead centre. Not only does Daisy embody the idea, but she also turns fabrics into beautiful works of art.

Coblogger Jodi has moved her recaps of The Bachelor Australia — affectionally called Bachie — on this blog. Twice a week, Jodie treats us to her perspective — sometimes academic, and sometimes just pure pop culture — and once in while the Bachelor will say ‘cool’, so it was only a matter of time before he said the catchphrase for this bingo square!

This square is tenuously related to Lainey’s List. You all know I have a deep dislike for serial romance. But when I started reading this story on Jen Frederick’s website, I had to know more. Frederick’s newsletter subscribers get one or two chapters ahead of time, so now every Friday I could down the minutes until I get the latest email. But anyway, the hero is a professional NFL player (or it could be college football — I love sports romance but I don’t really pay attention to the sport!). This story has so many intense feels, I can hardly bear it! It’ll be done by the end of October, I think, so if you don’t like cliffhangers, I’d suggest waiting until the full story is up on Frederick’s website.

‘Have a wonderful night.’ He bent over and kissed Anna on the cheek. She tilted her head into his lips and his lower lip brushed against hers. Not quite a kiss, but enough that his stomach clenched. ‘Hope this makes it all worth it,’ he whispered into her ear.

I wish I could remember how I found Audrey Assad’s music. I think it was via Twitter, but I forgot who and in what context. A lot of Jesus songs deal with the concept of coming home, of building home, especially after some kind of loss (including loss of self). I know it’s a cliche but it never fails to tug at my heartstrings. Assad’s lyrics are general enough that you can enjoy it without the Christian overtones.

This one is fairly straightforward. I’m still an avid fan of this game, although I’ve caught about 80% of the Pokédex, so I rarely get to experience the thrill of a new catch anymore. It helps that there are two Pokéstops within reach of my couch! If you haven’t heard of this app, it’s the mobile phone version of the Pokémon game. The app uses augmented reality, which means it uses real world locations as the basis for game elements, and you really need to move around to get the best out of the game. I won’t explain the gameplay — the best way to learn that is to download the app and start playing! — but anyone who watched Pokémon as a kid will get a thrill out of the game. It certainly makes my morning coffee run a lot more diverting.

The Hating Game by Sally Thorne

This book is getting so much buzz, and it’s written by an Aussie! The story starts off with the enemies-to-lovers trope, but once you get the sense that the hero is totally into the heroine, the romance is just wonderful. One of the things I love is how domestic the hero is. Maybe it’s just me, but there’s something very sexy about a man who prepares a hot beverage for a woman. This is from my review (see link above): ‘She’s in his apartment and she would jump him in a heartbeat … and he makes her tea! Because he wants to be sure she’s not just after his super-fit body!’

Entertainment Weekly published an exclusive extract from J. R. Ward’s upcoming Black Dagger Brotherhood book [ BT | Amz ]. I don’t really have anything to say about this, except that it sounds very new-Warden rather than classic-Warden, so I don’t know that I’ll be picking it up. (Fear not, there are always at least two people on the Book Thingo team who are into the BDB crack, so rest assured one of us will be reading this book!)

Oh, and Ward is renowned for wearing dark sunnies, hence the bingo square.

I attended the Romance Writers of Australia Conference in Adelaide a few weeks ago and found myself in — ahem — august company. In particular, I was pleased to listen to the academic panels. The level of discourse around romance fiction is so heartening, and it’s the broader literary community’s loss that they don’t pay more attention to our writers and scholars.

And speaking of high achievers, there was also the Olympics. I used to love the Summer Games, but over the years, free-to-air coverage of the event has become increasingly irrelevant to me. This year, the aggressive takedowns and geoblocking of video clips from the Games has just pissed me right off, so I barely tuned in at all. I mean, when the ABC can’t even show video from medal events on the evening news, what’s the point? That said, there were three wins I enjoyed (reading about):

Hidilyn Diaz won a silver medal in weightlifting. It’s the Philippines’ first medal by a female athlete, and breaks a 20-year drought. It’s also the first non-Boxing medal for the country since 1936.

The Australian Womens Sevens won gold in the rugby. It’s the first time the sport is in the Summer Games, so this one is also a historic win.

Fiji won gold in the rugby sevens. It’s the first Olympic medal of any kind for Fiji, and the team had an amazing homecoming.

This story begins with a long-distance meet-cute — hero Garrett is deployed in Afghanistan; hero Kai has social anxiety — so it’s not really a spoiler to reveal there are a lot of solo sexy times involving fantasies (hence: Dreaming). This was only an average read for me, but I love the way Erickson and Hassell incorporate online chat into the story:

Garrett: I had a dream about you.

Garrett: A dirty one.

There isn’t much bopping in the dance scene in Hotel Oriente, but I’m claiming this bingo square by word association! The heroine, Della, is deaf, and when the hero sees her watching a roomful of partygoers dancing, he asks her for a dance.

Moss could see the eyes of his kitchen crew upon them, so he danced Della through the swinging door into the back hall used by room service. She laughed as he twirled her into the darkness, only the light from the round porthole window illuminating their faces.

‘You look like the help’: the disturbing link between Asian skin color and status

Swear On This Life by Renée Carlino (review coming soon)

I was enjoying this book until the hero showed up. The premise is that Em discovers her life story laid bare in a roman-à-clef written by her childhood sweetheart, Jase. She’s distressed by this, and even more so when she confronts him and he makes it sound like it’s some kind of apology or act of love or … something. It’s never really clear, what with his smirking and running his eyes up and down her body whenever they meet. Em just wants an explanation and maybe some closure, but everyone — from her roommate, to her lesbian aunts, to Jase’s agent-slash-fuck-buddy — tells her to give him a chance, to read the book to the end because It Will Mean Something. It was actually somewhat distressing to read about this poor woman whose entire support network — except for her boyfriend-soon-to-be-ex, whom I actually liked — decides to downplay her feelings because the hero is omg so hot! and wrote this omg so well-received book! to omg prove his feelings! To this I say: