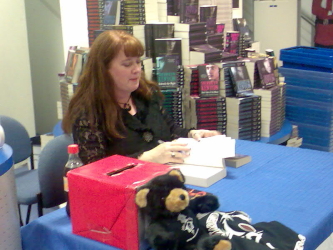 On the train into the city, I picked up where I left off weeks ago in Midnight Kiss Goodbye, Dianna Love’s contribution to the Dead After Dark anthology (which I stopped because I wasn’t in the right headspace at the time—it’s not a reflection on Dianna because I actually liked the story this time around). Then I got to the end of the story and the thwarted villain says to Ekkbar, the weaselly double-crossing magician blamed for the failure, “Give me one reason I should not spend the rest of eternity in this dung pit slicing a strip off your skinny hide daily and making you fry it for my meal.”

I was disturbed to think this came out of the bubbly, energetic, upbeat blonde I met in Melbourne. Scary, scary Dianna.

The signing was moved forward from 5.30 to 4.30, which suited Sherrilyn Kenyon and Dianna, as well as people like me who don’t have to wait for my freedom from work at 5pm. I arrived after 4pm and signed in. I was given a card with my name and the number 11 and asked to put my email address on the back so it could go into a draw at the end of the night. I also bought the new release Dream Warrior with the 20% discount card Sofia handed out to potential customers at ARRC (which I mentioned just so the guys at Galaxy would know she was working in Melbourne if they read this).

Sofia is a huge, huge Sherri fan and was a bit nervous about being asked to greet Sherri and Dianna at the front of the store, so another friend and I went with her. I think it had more to do with Sherri being there at HER store, sitting near HER wall (the current placement of paranormals immediately inside the shop proper was apparently Sofia’s idea, and she takes pride in what’s hers). It’s different when you’re meeting her in a random location—did I mention Sofia’s sense of pride and ownership over Sherri coming to HER store?

Anyway, after spending so much time with them at ARRC, we were all familiar faces to the authors, who met us with hugs and enthusiasm, like we were old friends. Sherri said, “It’s so good to see you again!” I told Dianna she scares me now and the reason why, and she laughed her butt off, saying, “I liked Ekkbar. Isn’t he such an annoying little…?”

So along with Sofia, we escorted them down the stairs and watched Sherri get settled behind a table next to a mountain of her books. Looks like Dianna’s not here in a book signing capacity tonight.

Meanwhile, everyone else had lined up for autographs. It didn’t look like they were going in order of the numbers on our little cards. Oh well, I knew from hearing about other signings and from experience at ARRC, Sherri will keep going until everyone’s books are signed, so I didn’t mind the wait so much. I knew she’ll get to me.

While the nice girl from Hachette (Nicola?) was going up the line with Post-Its to take down the correct spellings of our names for Sherri to personalise our books, Dianna made her way down the line to talk to everyone who was waiting for Sherri. I had brought along my copy of Dead After Dark, in which both Dianna and Sherri had written stories. As she came to me, I said, “I realise that this is like your night off, but would you mind signing this for me?” Without hesitation, she replied, “Sure, I’d be happy to. I don’t have a pen…” and went off to get one. After signing my book, she also signed the booklet of the girl behind me in the line.

Meanwhile, Galaxy employees were moving through the store with glasses of champers and trays of cheese and crackers, raspberry tartlets and Tim Tams.

I spent the rest of my time in the line trying to narrow down my selection to two books for Sherri to sign. Apparently, the two-book limit was in the email advising of the new time, which I never got, so I had to choose between my copy of Acheron, the copy of Dead After Dark (newly signed by Dianna), Dream Warrior, and the collectible Dark-Hunter booklet that has left my house for the first time since I received it from America three years ago.

Even though I felt bad about adding to what must be a terminal case of writer’s cramp after ARRC, I tried my luck with everything but Dream Warrior (three books are easier than four, right?) Sherri wasn’t at all fazed, and I noticed her signing extras for fans throughout the night (shh, don’t tell Galaxy). And I can’t help but brag about the message Sherri wrote in my Dead After Dark: You’re the best! (Yes, it’s there in writing. YES! /End fangirl moment.)

This is one of the reasons why I can’t say enough good things about Sherri. Despite any satisfaction that comes from meeting people who admire your work, it cannot be easy to write notes in around three books per person (she even looks up at you and carries a conversation while she’s writing), stand up and sit down for photos, and treat each person as an individual without knowing anything about them personally, but she was as enthusiastic at the end as she was at the beginning. This woman values her fans.

Between getting my books signed and the prize draw, I wandered around the store in random conversations about authors, other signings and book recommendations (my Galaxy dollars will be spent soon). Something that really stood out was the framed Simi Fan t-shirt from the Daily Inquisitor, which a fan had just gotten signed.

I ran into Wandergurl, who spent time in and out of the line while trying to get a strong enough signal to liveblog the event, and kept her and her cousin company while they progressed through the line. Wandergurl entertained herself by drinking two glasses of champagne. She also entertained me by talking under the influence of those two glasses :P (She mentions it herself in her liveblog, so I figure it’s OK for me to mention it.) Then Dianna found us and some of the things she said were:

When the last book was signed, we moved onto the prize draw. The main prizes were a black teddy bear wearing a black shirt reading “Marked by Fang” as well as a human-sized t-shirt of the same design. Dianna ran the draw for the smaller items first. I won a keychain and they also gave away Dark-Hunter slap bands and Acheron pins. Dianna refused to give the major prizes to people who had already left—you still had to be in the store to claim your prize. Then Galaxy gave away three $20 vouchers.

After the draw, the evening drew to a close. Sherri and Dianna had to get up at 4am Wednesday morning to start making their way back to the States. I don’t think we’ve seen the last of them, though. They seem to enjoy Australia as much as Australia enjoys them.