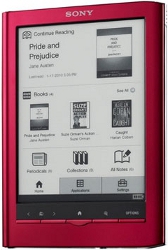 Yesterday I was so excited; today not so much.

Update: Some lovely Sony people on Twitter followed this up for me. The Sony store in World Square (Sydney) should have the Reader on sale on September 8. Maybe.

Further to yesterday’s news that Sony has launched the Reader in Australia, according to CNET Australia the Readers will be priced from $229 to $299. The Readers will have touch screen and the ability for users to take notes and annotate ebooks using a stylus—a key selling point for me.

By coincidence I had emailed Sony on Wednesday to ask them about the Reader and they replied that I can check it out at a Sony store. I was all excited, until the cynical consumer in me kicked in. So I called my nearest Sony store and was told that, in fact, they had no display stock of the product and that it hasn’t been officially released yet.

The real launch will be next week, and the Sony employee I spoke to said that they don’t expect stock to come in until later this month.

Let me repeat: the product launch was announced yesterday, the product will really launch next week, but there will be no stock for sale or display until later this month.

Talk about an anticlimax.