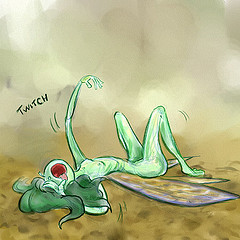 I wrote this article for the ARRA newsletter early this year. If you follow me on Twitter, you’ll know that every time I talk about reading the back of the book first, #afairydies.

On the weekend I was reading Solace & Grief, a young adult urban fantasy by Australian author Foz Meadows, and around a third of the way in I just couldn’t help myself: I read the ending.

When I tell people of my spoilery ways, they either tell me that they do it, too—and nine times out of ten they’re romance readers—or they’re shocked that I could do such a thing. It ruins the story! they insist. And I tell them, No, it allows me to read the book instead of stressing out about how it might end!

I blame my miscreant literary habits on Gone With The Wind, which I read as a teen. I’d never seen the film, but it always seemed to make people’s shortlists for Favourite Romance, so I expected it to be … well, romantic. After a weekend reading marathon, with a box of tissues close at hand, I finally got to the end and discovered that Scarlett and Rhett did not end up together!

That was probably the closest I ever got to actually throwing a book against a wall.

Ever since, I’ve never really trusted the promise of a happy ending; I’ll believe it when I read it. For a long time, I even read the back of Mills & Boon books.

Authors may find readers like me frustrating at times. I’m the kind of reader who absorbs spoilers for J. R. Ward’s Black Dagger Brotherhood books, knowing full well I’ll probably spend a gazillion bucks to buy the books in hardback when they’re released. If I find a book that sounds interesting but has elements that I’m not sure about—love triangles, for example—I’ll even trawl through blogs, Amazon and Goodreads to confirm if it’s the right book for me.

But authors need not despair. Spoiling the ending doesn’t affect how I enjoy a story. Sure, it might reveal a clever plot twist, but a story whose entertainment value depends entirely on a surprise ending is, I would argue, always going to be doomed.

Because the journey to that ending is what I want to savour—and I can’t do that if I’m constantly worrying about whether or not these secondary characters will end up together, or if the apparent love interest will cark it eventually. This is especially important if the author is new to me.

I’ve tried a few times to reform my deviant ways. What ends up happening is that I speed through the entire book just to get to the ending. This makes for a less nuanced reading of the text; I almost always end up liking the book more after a re-read.

When a book hints at a love story, knowing who ends up with whom means I’m prepared to put more emotional investment into the characters. Because, even though I read outside the romance genre, I’ll always be a romance reader at heart.

This is an edited version of  an article that first appeared in the ARRA Newsletter in February 2010. Photo credit: Every Time You Click This Link A Fairy Dies by Rob Clark (Flickr).