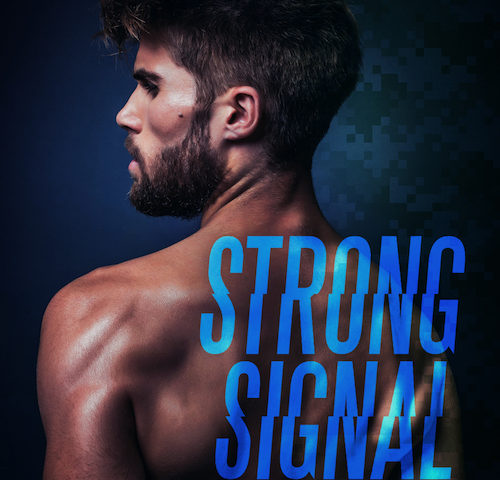 Tackles complex issues with nuance if you can get past the boring bits. Tackles complex issues with nuance if you can get past the boring bits.

Everyone has been raving about this book. I met Megan Erickson at RT earlier this year, and when I told her that I love her Mechanics of Love series, she told me I should try Strong Signal. So I’m sorry to say that I found this book a little … meh.

Garrett Reid is on his last deployment in Afghanistan as a mechanic, and after eight years of service, he’s counting down the months before he can go back home permanently. In his downtime, he plays an online roleplaying game, and when he loses what he believes to be an unfair fight, trolls a fellow player. The other player turns out to be Kai Bannon, an expert in the game, who makes a living out of his Twitch stream — essentially, people pay money to watch him play.

It’s a classic frenemies setup in a very contemporary situation, and it’s a credit to authors Megan Erickson [ T | F | W ] and Santino Hassell [ T | F | W ] that even knowing this was a romance, I wasn’t quite convinced how the two heroes could possibly find common ground. And to some extent, they never really convince me, which is perhaps why I didn’t love Strong Signal as much as other readers do.

But I love a lot of things about the book. I love the way Erickson and Hassell present a largely epistolary courtship through modern technology. I love the chat excerpts, the Skype conversations, and when Garrett is finally back on US soil, the text messaging. The online chat is sharp, sarcastic, and witty, and conveys perfectly why Kai thinks of his Twitch community as practically family — hands down, they were my favourite parts of the book. And perhaps one of the most poignant moments in the story happens via text message, while Garrent and Kai sit on opposite sides of a doorway:

Garrett: So, do you want to hear a funny story?

Kai: … is it about a guy who had an anxiety attack and slammed a door in your face because he’s terrified of being a huge disappointment in real life?

Don’t let the long-distance beginning fool you: this romance is hot. There’s fantasy sex, masturbation, Skype sex, and then actual sex once Garrett and Kai are finally in the same room. Neither hero is ashamed of his body, so their sexy conversations are explicit and creative. (Kai even manages to suck his own dick, which is kind of amazing, but let me just say that I don’t believe for one second that ‘I’d never done it before since I could get the same feeling with the right Fleshlight ‘ because I don’t know a single guy who hasn’t attempted it at least once. Not even the least flexible of the lot.)

My second favourite aspect of the story are the supporting characters, and especially Garrett’s family. They’re working class women who say what they mean, and don’t put on airs. Garrett’s mum’s reaction when he finally comes out to her is a great moment. Garrett’s family feels like a real family.

When Garrett’s mom returned to the table, she carried a tray with cheese, crackers, grapes and strawberries.

‘What, you getting fancy showing off to Kai?’ Nicole asked as she popped a grape in her mouth. ‘Because damn, I didn’t even know we had fruit.’

I also love the details about Army life. Garrett isn’t an all-American hero in the traditional sense. His reasons for joining the Army were purely practical:

‘The average income [at Rickston, Pennsylvania] is pretty low. It’s cold a lot — winters suck balls. And with that comes alcoholism and general fucking misery. It sucks. It’s easy to get discouraged growing up in a place like that, which is why a lot of guys join the service.’

The story doesn’t sugarcoat the boredom, the repetitiveness, and the way people’s personalities rub each other the wrong way when they’re forced to spend time with people they otherwise wouldn’t socialise with. It also tackles sexual relationships between the men — some of whom don’t identify as gay. Garrett’s altercations with a fellow soldier, Costigan, whom he had previously had oral sex with, are more complex than I had expected, and introduced some complexity in what was largely a, well, boring book.

The thing is, the book just feels … long. It’s written in alternating first person, but there is so much minutiae about life that don’t fit in a first person narrative. Or you can include it, but it makes the story boring. I actually have notes in my Kindle that talk about how bored I was. It’s particularly pronounced when Kai is the narrator, because he’s essentially a recluse, and omfg I don’t need to hear his internal monologue cataloguing about what’s in his shopping bag.

Third person limited would have made this story feel much less like telling than showing, and prevented that feeling of breaking the fourth wall when the characters explain things that they really shouldn’t be explaining in deep first POV. There are also some strange turns of phrases that are just … well, I don’t know anyone who thinks in metaphors like this:

His unease emanated through the door. It hadn’t been my intention to make him jealous, but goddamn if my heart didn’t do a somersault and my hope didn’t expand to the size of the sun.

Strong Signal deals with a lot of interesting themes, including life in the Army, gaming communities, social anxiety, sexual identity, coming out, and even pornography. At times it feels like there’s too much complexity, and not enough room given to unpack every issue in a way that I found meaningful or lasting. I struggle to remember all the things that kept Garrett and Kai apart, and how I felt when their relationship finally started to make sense. The ending is also rushed — for all that we spend almost the entire book being shown and told of Kai’s anxieties, the part where he seeks help and finds ways to cope is largely off-page. Perhaps this is realistic, but as a reader I felt shortchanged.

Content advisory: As in real life, there are a lot of boring bits

You can find an extract of the book at Joyfully Jay. Self-published.