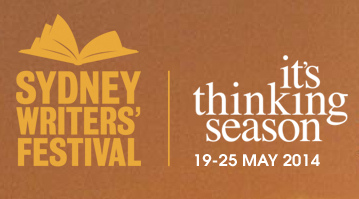 A round-up of 2014 Sydney Writers’ Festival panels that could have featured romance authors…only they don’t.

If you’ve been following our Twitter feed over the last few days, you’ll know that romance readers have been let down—yet again—by the Sydney Writers’ Festival, which features a program that completely ignores romance authors. If you haven’t read Gabby’s open letter to the SWF, it’s a great place to start. The amount of support we have received on Twitter, Facebook and here on the blog tells me that the support for romance is strong.

We’ve been brainstorming ways to increase the level of awareness for romance at SWF. There would be no compelling reason for SWF to incorporate romance panels if the organisers feel that the audience would not support them. So I think one of the easiest and most effective things we can do as romance readers is to attend the festival and be visible. And the easiest way I can think of to be visible at the festival is to attend panels and ask questions that speak to the romance genre. We don’t have to be obnoxious about it—we just have to demonstrate that we’re there, we’re listening, and that romance fiction is relevant.

I’ve put together a selection of festival events that I think would intersect very easily with romance. If you’re a romance reader thinking of attending the SWF, these panels and workshops might be of interest. Some years, we take what we can get, and 2014 seems to be one of those years.

So no, the irony is not lost on me. But if there’s one panel where I think the subject of romance fiction and its lack of representation in literary events is most relevant, it would be this one. The way in which questions of quality and criteria and value are framed often exclude romance writers and denigrate the reading preferences of romance readers. This is a ticketed event, so it’s likely that they won’t get to all the audience questions, but I’d love to see this live tweeted at the very least.

The shining light in this panel is that I know Kate Belle from Twitter and John Purcell in real life and they are definitely supportive of romance. Out of all the panels at the festival, this is probably be the closest we’ll get to romance this year.

The Madonna-whore and other fictions

Gold-digger, dumb blonde, mother, inspiration… There are so many labels given to women throughout their lives. How does the way women are treated in society affect us all? Both women and men are invited to hear Tara Moss, Nakkiah Lui, Emma Donoghue and Kate Ceberano as they examine the common fictions about women. Expect a challenging and entertaining discussion with compere Tracy Spicer as they take on old fictions, one woman at a time.

Tara Moss is a wonderful supporter of genre fiction, if her tweets are anything to go by. It sounds like this panel will focus more on non-fiction, but certainly the heroine archetypes and tropes we see in romance reflect many of the characteristics and values typically ascribed to women. I’d go to this out of pure interest and because Tara is always an engaging and thoughtful speaker.

Anita Heiss: So you want to write a chicklit novel

Join Anita Heiss, creator of the genre of ‘chic lit’ and author of bestselling novels Not Meeting Mr Right, Avoiding Mr Right, Manhattan Dreaming and Paris Dreaming to find out how to write a novel that speaks to your readers through believable characters in authentic settings. Learn about developing story lines, plotting your character arcs, the importance of research, the value of dialogue and finding your own voice. By the end of the day, you should have written your synopsis. Bring your sense of humour!

This is a writing workshop, so it won’t apply to most readers, but thank god for Anita Heiss, who has unapologetically written Aussie chicklit even when chicklit became unfashionable.

Many of you might know that I’m the editor of Booktopia’s Romance Buzz, so I have a working relationship with John. Besides that, I also know he’s a pretty cool guy who supports romance fiction. So what I’m about to say is not meant to be personal at all.

SWF, what the actual fuck? In a genre filled with women writers, you find one of the few male writers—writing under a female pseudonym—to run a workshop on writing sex scenes. It’s not that I don’t think John can’t write sex scenes or teach others how to do so, but considering the lack of romance in this year’s program, it seems a little…insensitive.

Hear some of the best women’s fiction in Australia today. Populated with strong characters, the stories by Anita Heiss, Judy Nunn and Susan Duncan capture our imagination and keep us wanting more. They sit down to talk with Fiona Harari about their latest novels and the secrets of their writing success.

If you attend this panel, then please, I beg of you, do not ask the panelists how they juggle writing and raising a family. (Maybe you can ask John that at the Sex and literature panel instead. Heh.) One of my peeves at last year’s SWF were the boring audience questions at the romance panel. Guys, let’s not be boring!

Be part of the live audience as Linda Mottram presents her 702 ABC Sydney Mornings program. Hear from some of the Festival’s leading and emerging authors as they explore a range of thought-provoking ideas and issues.

The reason I’m mentioning this event is that once a month on Linda Mottram’s The Blurb on 702 ABC Sydney, she chats with romance reader and advocate Vassiliki Veros (aka my librarian). Sometimes they talk about romance books and sometimes they talk about other things, but Linda is definitely receptive to romance chat. If you’re on Twitter, I’d suggest checking out Linda’s tweets and the tweets from the 702 ABC Sydney account just before they go on air, because sometimes they crowdsource opinions, and tweets from romance readers have been mentioned a few times in the past.

Grab a drink and a bite to eat while you join 702 ABC Sydney Evenings host Dominic Knight for a special version of NORMAN the Quiz, live music, plus engaging discussions with visiting authors.

I expect this show to be a little more frenetic, but Dominic Knight’s books all contain romantic elements, which tells me that he’s not averse to love stories that don’t end in death. Again, he will sometimes crowdsource opinions on Twitter, so if that happens, it could be a way to introduce romance fiction into the conversation.

Would it be too much to ask that Anna Cowan be named in this list? Because she deserves it. I think this award still tends towards literary fiction, but past winners have come from a broad range of genres. (Though none strictly within romance fiction that I know of.)

We’d all love to be able to write a great blockbuster – a book that sells millions of copies, captures imaginations around the world and is made into a film. But how do you embark on trying? Are there formulas you have to follow, and what can we learn from writers who do it well? Hear from novelists and scriptwriters Scott Baker (The Rule of Knowledge) and Steve Worland (Combustion), and writers Chris Allen (Hunter) and Greg Barron (Savage Tide), all of whom have created world-famous blockbusters.

I’d like to rename this panel to: ‘Blockbusters: Where are the women?’

Forest for the Trees: Writers & Publishing in 2014

A one-day seminar looking at the current state of publishing for Australian writers. It brings together writers, publishers, editors, and booksellers to discuss what is happening in 2014.

Crime writer Michael Robotham and debut novelist Eimear McBride talk about the challenges of maintaining a career. Publishers will discuss the creative avenues they use to find and promote authors.

The conversation will cover mainstream, digital and independent publishing ending with a panel of industry experts to shine some light on the year ahead.

The great news is that Mark Harding from Momentum Books is on this panel, as is Natalie Costa Bir, whom I know from Twitter and who is definitely genre-friendly. The bad news is that there doesn’t seem to be a representative from Penguin or Harlequin.

Have I missed any panels you think should be on this list? Which ones are you thinking of attending?