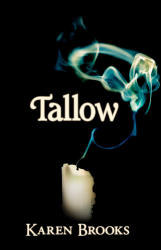 As artisans, magic and prophecies meet politics and superstition, there’s enough to like in this new fantasy series set in Venice—but the first 200 pages are hit and miss.

I was prepared to be enchanted by Tallow. The title is the name of the book’s protagonist, a candlemaker’s apprentice whose candles have suddenly turned strange. Although perfectly shaped and crafted, as soon as Tallow’s candles are lit, ‘things would start to happen—intangible, eerie things.’ Like causing people to weep for no reason, or to feed cats, or to suffer from insomnia.

Tallow’s adoptive family consists of Pillar, the candlemaker, and his resentful mother, Quinn, whose response to Tallow’s unusual abilities is to try and beat it out of her. But we soon learn that there’s a deeper mystery behind Tallow’s presence. Why, for example, is she never allowed to look people in eye? And why must she pretend to be a boy?

When a stranger, a Bond Rider, comes looking for Tallow, she begins to learn of her unusual heritage as an Estrattore. Tallow learns to control, channel and, most importantly, conceal her talent. But Tallow is still a child in many ways, and when the Bond Rider leaves, Tallow’s well-intended by clumsily executed acts of kindness lead to danger for her closest friends.

It seems Tallow is set to fulfil a prophecy, and there are many who’d like a stake in the outcome. The forces that seek to claim Tallow challenge her relationships with Pillar, with Quinn, and with Dante, a local boy whose friendship has come to mean much more to Tallow even though she can never reveal her true self to him.

I give props to Karen Brooks’s imagination. I love the idea of candlewax imbued with magic, which is released when lit. The book is set in Serenissima or old world Venice, and it’s always refreshing to read a fantasy novel with an unusual setting. It’s a world of artisans, political intrigues and superstitions into which Brooks weaves a story of magic, prophesies and immortal beings.

There’s a sort-of romance in the story, which I couldn’t resist, but it doesn’t meet romance genre conventions. This was my biggest frustration with story, although part of me hopes that Brooks will come up with a twist that will satisfy my romance reader hat. It’d be a damn big twist, but I’ve already begun to speculate. What? I can’t help it!

I know this is my personal reading bias coming through, but by the end of the book I felt that Brooks laid on a little more anguish than was necessary for Tallow. It could be that forthcoming books will provide more balance, but I was left very much unsatisfied by Tallow’s ending. The book is first in a series, and there isn’t much of an attempt to tie up loose ends.

Brooks shifts from third person to first person over the course of the novel. This is distracting at the beginning of the novel, especially when we’re introduced to an important event after it happened, and then it’s recounted through Tallow’s eyes. I found this transition very awkward.

I struggled to stay interested in the various antagonists that Brooks introduces, since most of them are removed from the action going on in Tallow’s life. However, towards the last third of the book, the switching between perspectives becomes much more fluid as different characters and plot points come together in the story.

I also found Brooks’s writing style a bit hit and miss, particularly at the start. The writing sometimes suffers from a lack of subtlety and awkward phrasing. This is frustrating when Brooks displays such restraint when exploring the heartbreaking relationship between Tallow and Dante:

For a moment, time stood still. It was just me and Dante on the Circolo Canal beneath the stars. I could hear my heart beating in my ears and Dante’s beating in my soul.

And later, because, of course, Dante believes Tallow to be a boy:

Still Dante did not reply. All I heard was the lapping of the water against the wood and the repetitive murmur of tiny waves as they broke against the fondamenta.

Part of me knew what Dante was talking about, but I didn’t know how to resolve it. If I told him the truth about me, any truth, I would be exposing not just myself, but my greatest friend, to terrible danger.

It was Dante that finally broke the uneasy silence. ‘I don’t think we should see each other any more.’

Brooks also reveals some unexpected twists in some of the major characters, particularly the volatile relationships between Tallow, Pillar and Quinn. Unfortunately, it’s done as thinly disguised info dump, which made the revelation seem less clever than it was.

Tallow is one of those books I find very difficult to evaluate. It struggled to keep my interest for most of the first half of the story, yet I couldn’t put it down from page 200 onwards. Brooks shows flashes of the kind of lyrical prose I love in my fantasy novels, and the world of Serenissima was something new and exciting for me. I think some of the issues I had with Brooks’s writing stem from being an adult reading a book targeted towards children and young adults, who I think may well be enchanted by this new series.

A review copy of Tallow was generously provided by Random House Australia.

In the course of researching some background information for this book, I learned that author Karen Brooks is undergoing treatment for bowel cancer. She writes, ‘I wanted to let you know that light exists in the darkest of places. Sometimes we just have to remember to shine it.’ I hope her candle burns brightly.