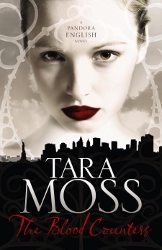 In a special RSVP event, Tara Moss came to Galaxy to sign copies of her newest book,

Tara was dressed in head-to-toe toe black with no visible sign (to my eye at least) of her baby bump. She accessorised with black nails, a black head band, black fingerless lace gloves, a long, beskulled necklace, blingy skull earrings from Vivienne Westwood and tall black heels.

I arrived in time for questions, but we didn’t have many and I suspect that many of us (and I’m including myself as well) haven’t read the book yet. Someone asked about the shopkeeper character and Tara hedged and tried not to give too much away. She said he’s a lovely shopkeeper and some characters appear in the books that we may see play a bigger part later.

Tara was asked how many books she has planned for the series and she said that it’s open ended. She’s happy to keep writing them as long as people enjoy reading them and she won’t have any problems writing more books.

When asked to give advice for aspiring writers, Tara said, ‘Don’t follow advice!’ She also said to just write. Don’t overanalyse it and try to write it perfectly the first time around. ‘Don’t write it right; just write it.’ With a novel you have the time to go back and make sure that it reads perfectly, unlike with a blog or an article where you may have to churn the words out and you might post it then see something you want to change, but it’s too late.

Tara decided to give us a bit of her background. Although she is best known as a crime writer, she has had a long-term passion for the macabre. As a child, she won a race and was awarded a Barbie doll, which she was upset about until her mother told her she could turn the doll into anything she wanted. Tara and her mother dyed Barbie’s hair black, decapitated her so she could carry her own head around and renamed her Barbie Vampirella. Tara loved Vampirella.

I think she was around six or so when she first saw Bela Lugosi play Dracula. As a child, Tara wrote disturbing stories and drew horrific pictures that convinced her she should be a writer rather than an artist. One story in particular was inspired by Stephen King’s Christine.

The Blood Countess is a departure from Tara’s Mak Vanderwall series and is based on Elisabeth Bathory, a historical figure connected to vampire lore by her conviction for killing her serving girls and bathing in their blood to preserve her youth. Even though she was found guilty of mass murder (from memory no one knows exactly how many girls were sacrificed, but there are estimates of around 600 over the course of many years), Bathory could not be sentenced, due to her noble blood.

Tara’s new heroine, 19-year old Pandora English’s story begins when she has to go to New York to live with her aunt Celia, who is like a fairy godmother figure, and Tara wished she herself had had an Aunt Celia when she went to New York, although their experiences were much different.

The Manhattan suburb of Spektor, where Celia lives, doesn’t appear on any maps and is covered in a mist inspired by the Blue Mountains, where Tara wrote the book. She really enjoyed letting her imagination run free and got to create the rules for this new place.

Tara read the scene from

The Blood Countess where Pandora realises that she is in Elisabeth Bathory’s presence and why the name sounds familiar.

I was able to get my books signed during the second signing session (thankfully, I wasn’t the only latecomer). I bought

The Blood Countess and brought along my three Makedde Vanderwalls.

I recalled something she said earlier. ‘Wow, has it really been 12 years since the first Makedde Vanderwall?’

‘When you’re the one writing them, it does.’

‘Charlaine Harris.’ Tara, Sofia, the publishing rep and I talked about the Southern Vampire Mysteries versus True Blood. It looks like the Harper Connelly series will be turned into a TV series as well.

Tara presents in a very polished way and not just visually (even though she still managed to look totally fabulous in the photo I took of her with her head down to sign a book). She still has most of her Canadian accent and when she speaks, it’s very clear and confident — no hesitation or rethinking partway through.

As she signed my books and stock for Galaxy, she drew little skulls in every book. Sofia handed Tara Galaxy’s author book, which contains signatures and even, in the case of a writing duo, hair samples. Tara wrote a short message and drew a dragon.