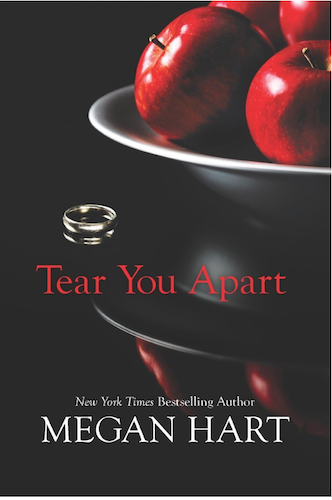 Review of: Tear You Apart

Megan Hart's prose is fabulous and heartbreaking when it's good. I could have probably overlooked the infidelity if the ending had been worth it--but it's not. Megan Hart’s prose is fabulous and heartbreaking when it’s good. I could have probably overlooked the infidelity if the ending had been worth it—but it’s not.

Elisabeth meets Will, a photographer, and although they try to control their growing attraction, they inevitably succumb to hornypants and start an affair, which becomes a catalyst for Elisabeth to recognise the many ways that her marriage has become less than satisfying. It’s not just the sex—her life has become a series of routines, and she becomes increasingly frustrated at her husband’s inability to appreciate and, more importantly, to hear her.

What begins as an affair with no expectations of commitment escalates into something that becomes increasingly desperate, as Elisabeth and Will struggle to accept that they may not be what the other needs, yet are unable to sever the relationship. It’s this descent into self-destructive behaviour that author Megan Hart does so very well. Despite the fact that I have absolutely no desire to read about a woman undergoing a midlife crisis—she is forty-five and Will is forty-eight, and it’s as unattractive in a woman as it is in man when it brings nothing but misery to herself and those around her—I felt some sympathy for Elisabeth.

What happens is you get married, you raise your kids, they go off to school, and you look at your spouse and wonder what on earth you’re supposed to do with each other now, without all the distractions of having a family to obscure the fact that you have no idea not only who the other is, but who you are yourself.

It helps that Hart doesn’t totally demonise Elisabeth’s husband, Ross. Although he’s the focus of Elisabeth’s dissatisfaction and is therefore never really seen in a positive light, Elisabeth doesn’t discount the romance and love she once shared with her husband.

Once upon a time I had fallen in love with this man, and I’d married him. We have children and built a life together. There’s value in that, no matter what else has happened or what I’ve done. I’m not in love with my husband anymore, but I’m trying to remember why I once had been.

Elisabeth conceals the affair well—and there are subtle hints that perhaps Ross, too, might have his own skeletons in the closet, although nothing is said explicitly—and she doesn’t deny him sex even while she’s seeing and sleeping with Will.

Hart’s talent for turning words into vivid images and emotions never fails to move me. Elisabeth has a condition called synesthesia, which is the perfect vehicle for Hart’s prose—Elisabeth tastes people when they talk, and her emotions become colours. It’s a fascinating aspect to her character that complements Hart’s lyricism well without dominating her character.

Hart’s writing is at its best when imagery is couched in Elisabeth’s synesthesia. The sex is messy and exciting and crude and honest—it’s not couched in the kind of literary glamour usually found in romance. I love this, even if I don’t always find the actual scenes sexy—they’re sexy for the characters, and that comes through clearly. At other times, the prose tends to descend into cliche. (The cover and blurb aren’t encouraging—not only is the train metaphor done to death, it has nothing to do with the story. Neither do apples, although I’m told that apple + ring = infidelity. I guess I need to brush up on my fruit cover symbolism.)

What I do love is the almost brutal honesty in Hart’s writing that is both beautiful and painful to read—she touches those tiny, hidden corners of women’s lives that aren’t often exposed, and when they are, it’s a jolt to the senses. Her stories are unsettling, confronting, and yet they’re a comfort, because here, suddenly, are our fears and hopes and frustrations revealed. Someone understands.

If marriage is a compromise and working together, sometimes it’s also just biting the fuck out of your tongue to keep yourself from ending it all over a basket of laundry.

And yet, it’s not enough. There’s too much angst and drudgery and desperation in the story for so little payoff. To be clear: this is absolutely not a romance. A love story, maybe, but it really falls more within the kind of literary erotica that wallows in characters waking up from their midlife ennui by reliving—or reviving—the sexy times that 20-odd years of marriage have managed to dull. And maybe I could’ve been fine with that if it had all been worth in the end, but you know when you tune in to T&A Friday on SBS and there’s a French film where the hero and heroine do stupid things to drive each other away, and you stick with it because there are boobs, and maybe you’ll see some dangly bits (hopefully attractive) and yes, you can look up porn online, but it just seems naughtier this way, and then at the end the heroine walks along the street looking blank or stunned, and you wonder what time it will end because you have work tomorrow…and then the credits roll? That’s how this book ends. With a loud, What the fuck just happened there? And I could probably work out why the author chose the ending that she did, but I’d still be miserable afterwards, so why bother?

On a somewhat lighter note, this book makes both the vomit list—‘He told me he loved me one night while he was drunk and sick, in between heaves.’—and the fart list—‘He lets out a long, ripping fart that fills the bathroom with the heavy scent of shit.’ But even those gems aren’t enough to redeem the ending.

This is not a romance. Hart’s prose is fabulous and heartbreaking when it’s good, but the story feels ponderous when it’s not. I could have probably overlooked the infidelity if the ending had been worth it—but it’s not. Also, it has nothing to do with apples.

Who might not enjoy it: Romance readers who need the HEA