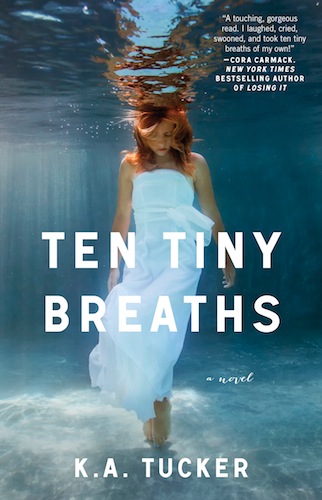 Some great bits of dialogue can’t make up for a plot twist that undermines the happy ending beyond repair—a case of trying to make the characters suffer too much for no good reason.

I picked this book up on a whim—young adult/new adult romance isn’t my subgenre of choice, especially now that this market is flooded with same-same books—but I was drawn by the title and the cover. The story starts off intriguingly enough. Four years ago, Kacey Cleary was involved in a fatal car accident, and she’s been in state of post-traumatic shock ever since. She and her sister Livie have basically run away from their guardians after their uncle made inappropriate advances towards Livie.

They move into a dingy apartment building where Kacey encounters a mysterious but oh, so hot neighbour Trent, and single mother  Storm and her daughter Mia. Kacey is attracted to Trent, but she mistrusts the attraction—after the accident, she resorted to all kinds of risky behaviour, and she’s determined not to fall back into bad habits. Instead, she seeks out the closest gym so she can expend all her energy on something productive, like kickboxing. Which she will need after she accepts a job at the local strip club as a bartender.

There’s an unevenness in the tone of this book. It has a very romancey feel whenever Kacey and Trent are together, but switches to a kind of angry and violent mood everywhere else. This is typical of the (very small number) of so-called extreme romances I’ve read, so perhaps this is par for the course. But for me, this made the romance feel tacked on and glamourised, rather than being a reflection of where Kacey is at with her grief. And although there’s a lot to like about their dialogue, it’s not enough to sustain my investment in them as a couple.

Trent lacks dimension as a character—not helped by the fact that the story is told in the first person by Kacey—and while the individual things he does for Kacey seem romantic—but borderline stalkerish—he’s really nothing but a plot device. Worse, he continually takes Kacey’s agency away from her. He says all the right things for Kacey to feel desired, but continually holds back sex *for her own good*. This seems to be some kind of noble hero sacrifice in the new adult genre, but at least in this book, all it does is make Kacey look like she doesn’t know what’s best for her. Then, he forces her into group therapy—using sex—instead of supporting her until she feels ready for that step. When they finally have sex, he disappears for weeks, and then…explosive plot device.

The blurb hints at ‘an explosive secret that could shatter both their worlds’, but I worked out the twist about halfway into the story. It’s also a completely unnecessary plot direction that diminishes the love story to the point where I found myself almost repulsed as the characters approached their happy ending.

If you love extreme romances with young protagonists, this might work for you. For me, this book is a case of trying to make the characters suffer too much for no good reason. It’s a shame because some of the dialogue between Kacey and Trent show promise, and there are some genuinely interesting issues about grief and recovery that are left unexplored. But some great bits of dialogue can’t make up for a plot twist that undermines the happy ending beyond repair.

Who might enjoy it: New adult readers who love shocking plot twists

Who might not enjoy it: Readers looking for character depth

An advance reading copy of this book was generously provided by Simon & Schuster Australia.