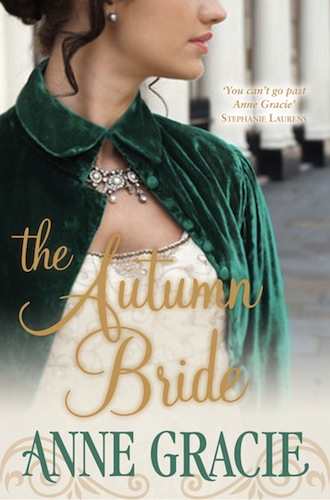 Review of: The Autumn Bride

This book is a delight to read. It's escapist fun, yes, but it's also firmly on the side of women and the ties that bind them. Tissues not required. Escapist fun, yes, but it’s also firmly on the side of women and the ties that bind them. A delight to read.

I’ve enjoyed Australian romance author Anne Gracie’s work in the past, but she’s one of those authors whose backlist is so intimidating, I’ve never got around to catching up. I think that’s about to change after reading this book.

Abigail Chantry, orphaned young and whose parents were disowned by their families, has been living on the edge of respectability. When she’s accosted on the way home and told that her sister, Jane, is being kept against her will at a brothel, she has no choice but to rescue her sister and the two women who came to her aid—Daisy, who grew up in the brothel but wants to be a dressmaker, and Damaris, a missionary’s daughter sold to the brothel owner on her way home to England.

Unable to keep her post as a governess and desperate for money, Abby breaks into a nearby mansion. She finds it devoid of valuables, but discovers an invalid, Lady Beatrice Devenham, being mistreated by her servants. With the consent of Lady Beatrice, Abby and the girls connive to take over the household and nurse the old lady back to health.

Meanwhile, Lady Beatrice’s nephew, Max, receives word that her aunt is being neglected, and returns to England to find the household taken over by impostors—the Chance sisters, whom Lady Beatrice claims as nieces. Needless to say, he’s not impressed. Likewise, Abby is outraged at being accused of trying to fleece Lady Beatrice when it was Max who had failed to monitor his aunt’s welfare.

“Why?” He looked at the small, scruffy kitten, now resting against the soft bosom of a deceitful woman. The creature was too young to know the dangers of that.

“Because he is bold and dashing and handsome, of course,” said his aunt.

“Because he is always off adventuring and never where he ought to be,” said Miss Abigail Chance at the same time. With a pointed look, damn her cheek. What did she know of his business?

She held the small black kitten against her bosom, caressing it behind the ears. Max the kitten purred blissfully, like a rusty little coffee grinder.

Soon, though, Max is battling his attraction to Abby, because he’s honour-bound to keep a betrothal he arranged in his youth as part of a deal to pull his estate out of the financial ruin in which his uncle left it. And Abigail knows that, sooner or later, the danger that their identities will be discovered will mean leaving Lady Beatrice and Max for good.

Gracie certainly knows how to tell a good story, because even though neither the suspense plot nor the betrothal dilemma dominate the book, it’s never boring. The interactions between Max, his aunt, Abigail and her sisters, and the various supporting characters are charming enough to sustain the pace. Even the kittens are charming, especially when Max attempts to teach his namesake some civility. This ensemble is also very much focused on women’s issues and the way that their fortunes are inextricably tied to the men in their lives.

It would have been easy to portray Abby as a self-righteous martyr, but Gracie ensures that we see Abby’s struggle between what is right and what is necessary to support her adopted family. These decisions weigh heavily on her.

She was not an employee. But there was no word for what she was. Friends didn’t accept a stipend for their friendship. Neither did guests. Abby did what she did for Lady Beatrice because she cared about her, and wanted to help—not for money. If she’d had any choice, she wouldn’t have accepted any payment at all.

But she had no choice. It was horrid being so poor. You couldn’t even afford pride.

The attraction between Abby and Max is fairly obvious from the start, but the subtle way in which their romance develops from attraction—which they both fight—to deeper emotions is lovely to read. There are no grand balls with their insidious waltzes and sleazy balconies, no stolen embraces behind topiaries or in drawing rooms. How, then, do Max and Abby fall in love?

…as she blew out her candle and snuggled down in her bed, she thought of Lord Davenham carrying his aunt upstairs, still able to maintain his humour and his patience despite her outrageous behaviour.

She thought of the story Lady Beatrice had told her, of that little boy waiting loyally, grieving silently and alone—she could not rid herself of that image, either.

Her heart had gone out to that child, and now she saw echoes of the boy in the man—his obvious love of his aunt, his care for her, his protectiveness.

Even the hostility he’d directed at Abby and her sisters was born of the need to protect his aunt. It was a powerfully attractive quality in a man.

The Autumn Bride is a delight to read. It’s escapist fun, yes, but it’s also firmly on the side of women and the ties that bind them. Tissues not required.

Who might enjoy it: Lovers of fun Regency romance

Who might not enjoy it: Readers looking for rakes, gaming hells, ballrooms or frivolous misses