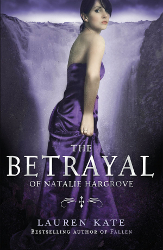 Enjoyable in a seedy way. If you’re looking for a book with an innocent heroine and black and white morality, you will be shocked.

Warning: If the title wasn’t enough of a hint, this story does not have a happy ending. This is a standalone novel originally published before the Fallen series and has been reissued presumably as a result of the series’ success.

Natalie Hargrove is the most popular girl at Palmetto High and expects that she and her wealthy, laid back boyfriend Mike will become Palmetto Prince and Princess (like homecoming or prom king and queen). She has worked hard to overcome her poor white trash background to achieve her social standing and isn’t about to let Justin Balmer, of all people, stand in their way, especially after their secret shared history.

After a Saturday night party, Natalie and Mike discover a drunken J. B. in drag and take him to the church to sober him up. On impulse, Natalie ties him to a tree outside so everyone can witness his humiliation on their way to Sunday services. Unfortunately, J. B. dies overnight and slowly everything Natalie has worked so hard for unravels around her.

Natalie Hargrove is a much more grown up protagonist than Luce Price from Fallen. She has strong opinions and flaws and is much more determined. She looks down on her mother for her obvious social climbing, but the only real difference I can see between her and Natalie is their degree of success. Natalie is selfish and willing to step on others to get what she wants. There were times where I wasn’t sure I liked her or that she should succeed, but her one thoughtless act has some heavy consequences that outweigh her intent.

As the story progresses, Natalie’s vulnerability becomes more evident, and you get a sense of how her security is derived from her role as the queen bee and the influence it brings, and how fragile and tenuous that foundation proves to be for her.

The book was a compelling read even though it held an undertone of impending doom. I kept turning the pages, part of me feeling that Natalie should be taken to account for her part in J. B.’s death, and another part of me hoping she could avoid paying for this mistake since she never intended for anyone to get hurt.

She keeps trying to forge ahead with her plans for her and Mike to be crowned Prom King and Queen, maintain her popularity and her relationship in addition to getting away with murder, but some things can’t be planned for and some circumstances are outside of her control. The harder she fights, the lower she sinks into blackmail, sex scandals, drugs and manipulation.

The aftermath plot is rounded out by flashbacks into Natalie’s past and her struggle to prevent the people she’s moved on from colliding with the new life she’s created for herself, exposing her as a fraud. But the most interesting twist came from the revelation of her previous encounters with J. B., which show her overall behaviour towards him in a less bitchy and vindictive light.

I’m not sure I liked many of the secondary characters as most of them seemed as parasitic and grasping as Natalie herself was; she was just better at it than most. Mike was weak and boring, and I couldn’t see what Natalie saw in him other than status and good looks, which I think may have been enough for her. Even though he was dead for most of the book, Justin haunted its pages and left a much stronger impression than Mike’s presence.

The story could have done without the reappearance of Natalie’s jailbird father. His scenes didn’t really serve a purpose in the overall plot and he would have done just as well had he remained in jail.

I found the ending a bit abrupt. Loose ends were tied off, but only so far as they were directly influenced by Natalie’s fate. I was left wondering about the outcome of the investigation and the ultimate fate of some of the other characters affected.

The Betrayal of Natalie Hargrove stayed with me for days after I’d read it and made me think about the inevitability, determinism, free will and the random element at play in the story. After a ringside seat to the drama, courtesy of Natalie’s first-person POV, the conclusion steps back to the third person, showing that in the grand scheme of things, shit happens and life goes on, giving the story both depth and shallowness.

I enjoyed this book, despite its unhappy ending, because of Kate’s skill in structuring her story and the bittersweet, twisted fates of Natalie and J. B. But if you’re looking for a book in the same vein as Fallen or Torment, with an innocent heroine and a black and white, good vs evil viewpoint, you will be shocked. While enjoyable in a seedy way, this book is not the most comfortable read and has more in common with films like Jawbreaker and Wild Things.