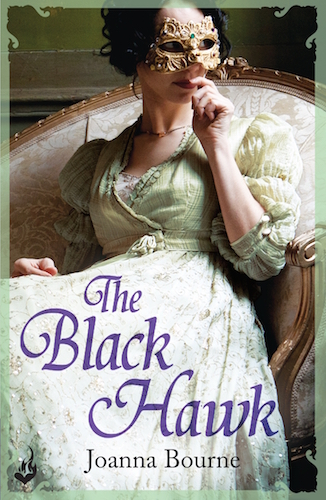 Review of: The Black Hawk

This is one of my favourite books ever. Disclaimer: This is one of my favourite books ever.

Someone has just tried to kill Justine De Cabrillac, former French spy of the Secret Police, now living in England after the end of the Napoleonic Wars. She’s managed to make her way to her ex-lover, Adrian Hawker, the only man she can trust to save her when in trouble. He also happens to be the head of British Intelligence. Who is trying to kill Justine? And what does that have to do with him? And more importantly, can he trust her?

In anticipation of Joanna Bourne’s next novel, Rogue Spy, I reread this one. Despite having reread this several times now, The Black Hawk did not disappoint. Bourne has a gift for writing lyrical prose and weaving characters and stories together. The story moves in and out of the past and present, tracing the story of how Justine and Hawker’s relationship came to be, came to end, and reached the point where they are now.

Justine and Hawker meet as thirteen year olds — already veterans of the service — in revolutionary France, and then again years later in different periods, still in their respective professions, together but apart. At the risk of sounding like a cheesy romantic, this book has some of the most poignant, touching love scenes I’ve read, and it’s almost as if you can feel the emotion through the pages.

The secondary characters — some of whom have made appearances in other books, which are loosely connected but can stand alone — are well crafted and have their own stories that do not deter from the central love story. The centre of the story is the relationship between Justine and Hawker — and what a grand romance it is! This is what romance novels are all about.

Very highly recommended, although I might be biased. If you are looking for something well-written and emotional, or are over the usual stuff you’ve read and are looking for a good author, this is it. (All of Bourne’s books are well crafted so really you can take your pick.)

Content advisory: Will spoil you for other historical romances.

This series is being released by Hachette Australia under its Headline Eternal imprint. The Australian release does not number the books in the order they were written by the author. You can find more information on the order the books were published and the chronological order of the stories on the author’s website.