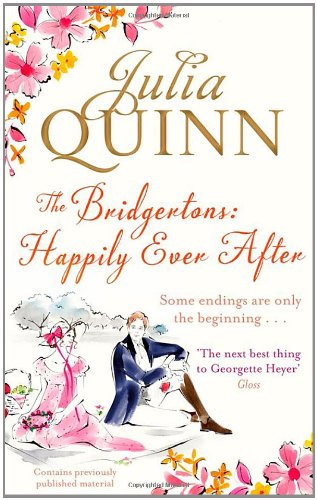 The series that made me—and the rest of the world—fall in love with Julia Quinn. If you haven’t read this series, start now! If you have, then this is the cherry on the cake.

Special note for fans: Julia Quinn will be a keynote speaker at the 2013 Romance Writers of Australia conference at Fremantle in August. Click here for more details.

Actual text message from the year 2000:

BFF: Wandergurl! Anthony Bridgerton is getting married. We have to get The Viscount Who Loved Me.

Me (Thinking, Who the fuck is… ohhhhhhhhhhh.): Yes! Of course! We have to get someone to bring it from America.

Back in the early 00s when I was growing up in the Philippines, you didn’t get books on time and the bigger independent bookstores didn’t really exist yet. It’s easier to get things now, but back then, your best chance for immediate access during a release date was to have someone vacationing in America to bring it back to you. After reading The Duke and I in a rental book club called ‘The Armchair Reader’ (and buying the book when the book club closed down) I was determined to get the rest of the series.

Aside from the actual stories of the books, obtaining them involved their own stories. I had one of our clients, a big, burly bearded Texan bring one back for me from Austin. My managing director brought back my Amazon order with a Bridgerton and The Lord of the Rings, extended edition. My giant elfish geek of a friend went to a bookstore and never let me hear the end of it after he had to ask for Romancing Mr. Bridgerton. (He also very nicely climbed a ladder and alphabetised my romance novels at my request. Thank you, dear.) Another was brought back by a Goth friend from San Francisco, who also happened to read romances and thought Sir Phillip with Love wasn’t bad—except the title sucked.

Eight books and a few spin-offs later, the series finally ended (and I moved to Australia). People couldn’t get enough of the Bridgertons, with their witty repartee and the sense of humour with which Julia Quinn traditionally infuses her books. And of course, everyone wanted to know what would happen next! So Quinn started releasing second epilogues in ebook format—that is, the epilogue after the one in the book where they all end up having babies and such. This book is a compilation, in print, of all of the second epilogues, plus three new epilogues.

I devoured it during my lunch break at work (and beyond—sneaky, sneaky!).

The second epilogues are filled with the Bridgertons’ trademark sweetness, comedy, mishaps, wit and the relationships that bring the characters together and ultimately make this one of the best series I’ve ever read. My favorite epilogues were (in no particular order): Francesca’s—she finally gets what she’s always wanted; Eloise’s—largely because it’s narrated by her stepdaughter and is utterly comedic; Penelope and Colin’s—really, they are great; and Hyacinth’s—even if she is the character I most dislike, because she finally gets her comeuppance in having a daughter exactly like her.

This is for anyone who, like me, misses the Bridgertons and sometimes wishes there were more stories to go around. If you haven’t read the series, I suggest you go and pick it up now. It’s funny, delightful, and really one of the perfect introductions to historical romance.

Side note: I challenge my fellow Book Thingo reviewers to review their favorite Bridgerton novel and post it! Let’s do it! Whether or not this will happen is another story.)

Who might enjoy it: Fans of the Bridgertons series

Who might not enjoy it: Readers who hate epilogues

An advanced reading copy of this book was generously provided by Avon via Edelweiss.