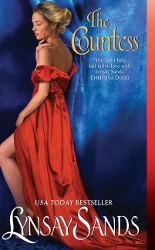 Light on plot, on character and on plausibility. And they make out next to a corpse.

An e-galley of this book was generously provided by the publisher via NetGalley.

The Countess was one of the first books I requested from NetGalley. In the process, I made some important discoveries:

1. DRM-protected NetGalley books expire 60 days after downloading.
2. It isn’t unusual for me to take me more than 60 days to review a book I’ve read.
3. Sony Reader’s note-taking feature is linked to the ebook file. When the ebook file expires, my notes are unreadable.

Luckily, I can still do this review, but it’ll be a little more general than usual. Except when I specifically mention making out next to the dead guy. More on that later.

Christiana, Countess of Radnor, had thought she was entering a love match, but her first year of marriage revealed her husband, Dicky, to be an abusive and tyrannical man. When he drops dead without warning, she and sisters cook up a plan to keep his death a secret until one of them can marry and save their father from his gambling debts.

You think that’s hard to believe? You don’t know the half of it.

The thing is, I don’t mind a bit of fantastical historical romping. Lynsay Sands’ The Switch is on my keeper list, and I wouldn’t exactly call it realistic. But Christiana keeps Dicky’s body on a bed packed with ice. In a time when disease isn’t exactly easy to treat and hygiene isn’t entirely…hygienic.

Anyway, that’s just the set up. It turns out that Dicky is really an impostor — the Earl’s twin brother. The real earl, Richard Fairgrave, conveniently turns up at the first ball the sisters attend after Dicky’s death. Imagine their total shock.

I wasn’t shocked, because I read the blurb.

Christiana is understandably torn because she loathes Dicky but, OMG, suddenly he’s making her swoony and fluttery as she’d felt when he was first courting her. Except there’s still a dead body in the house and the truth is revealed.

So okay, it’s Weekend at Bernie’s historical romance-style. But when I got to the scene where Christiana and Richard do the hot and heavy next to the corpse (possibly partly on top of it, but I couldn’t check my expired egalley), I squealed and not in a good way.

Listen, you can pack a corpse in ice as much as you like but unless it’s in a freaking freezer, there’s no way this scene could have been anything but gross. And smelly.

The story never recovers. Richard is looking for whoever killed Dicky — and hence might have tried to kill him. The conclusion is underwhelming. Christiana is trying to figure out if she wants to stay married or not…by having sex with Richard. Nice. Consummate the marriage and trap your own ridiculous self. WTF? Meanwhile, in the sequel, one of her sisters is apparently off doing the rumpy-pumpy in a carriage with Richard’s BFF while the corpse looks on. Splendid.

Books in the Madison Sisters series