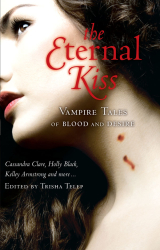 If you’re thinking of reading The Eternal Kiss to wean yourself off a Twilight high, think again. Pitting Twilight against this feast of words and emotions would be like comparing Passion Pop with a full-bodied Shiraz.

This review is based on a review copy of The Eternal Kiss generously provided by Random House Australia. This book is published by Running Press (Perseus) in the UK and USA.

The Eternal Kiss is a collection of 13 vampire stories for young adults written by some of the most popular authors in the genre. The stories in this luscious anthology are indeed bound by blood, but it’s the complexity of desire that gives the authors room to flex their skills.

This isn’t a romance anthology, but most of the stories incorporate some flavour of love, lust or both. Desire wars with reason, and the passion of youth is explored—sometimes tenderly, sometimes with violence. The authors offer different points of view—guys and girls, vampires and humans, predator and prey.

Most touch on one’s sense of identity and asks the question, What makes us unique? There’s no common sense of morality, and this is what makes the anthology, as a whole, so compelling.

Stories you can sink your teeth into

Editor Trisha Telep has put together an excellent sampler of the range of writing talent in young adult horror fiction. Some authors clearly excel in the short story form. Holly Black, in particular, has been a find. Her story, “The Coldest Girl in Coldtown”, had me almost in tears. I was both enthralled and devastated.

There are other revelations. In “Wet Teeth”, Cecil Castellucci challenges the reader to pick up on the barest hints to construct the relationships between characters. It’s fantastic to find an author who trusts her readers enough to do this. I read “The Thirteenth Step” in one go, I was so captivated bv the mystery and growing sense of horror that Libba Bray has woven. “Ambition” by Lili St. Crow has, I think, the most fascinating ending.

I would’ve preferred stronger stories to start and end the anthology, but I can’t fault the range of styles presented in the collection—from Rachel Caine’s snappy, urban characters in “All Hallows”, to the more poignant “Shelter Island” by Melissa de la Cruz, with plenty of variety in between.

Some stories could have been improved by paring down the plot or the breadth of characters—they simply try for too much in such a short form. Still, it was never a chore to finish any of them, even those where the narrative voice wasn’t my usual fare. There’s enough here to satisfy any palate and whet your appetite for more.

Because it includes such a broad range of styles, plots and ideas, The Eternal Kiss is best savoured in small bites. I’d like to give every teenage girl with a crush on Edward Cullen a copy of this anthology. There’s a reason we love vampires in fiction, and it’s not because they sparkle.