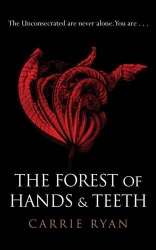 Review of: The Forest of Hands and Teeth

Lacks some depth, but beautifully written, heartbreaking, and kept me reading furiously until the end. Lacks some depth, but beautifully written, heartbreaking, and kept me reading furiously until the end

I first heard of this book over at the Whatever, where author Carrie Ryan talks about how she got the idea for her debut novel. (Tell me that’s not one of the most romantic story idea stories ever.) When I saw it again at Tez Says, I emailed Hachette for a review copy because I loved the premise and the US cover. The Twilight-esque Aussie cover is a much more elegant black with a red graphic that looks like a flower but in fact reminds me of bandages on a mummy. (Different kind of undead, I know.) Ryan’s writing is at times so beautiful, and the novel begins with such heartbreak, that it’s impossible not to get caught up in Mary’s narrative. And even though I was disappointed by the story’s lack of depth, The Forest of Hands and Teeth kept me reading furiously until the end.

Mary lives a simple existence in an isolated village surrounded by forest. It’s a forest she can never set foot in—the Forest of Hands and Teeth—because beyond the village fence are the Unconsecrated, humans infected with a virus that turns them into the walking dead. Mary’s father disappeared into the forest one day, and the story begins with a glimpse of how this has affected her family and how, despite her grim surroundings, Mary isn’t immune to your everyday teenage problems. In fact, they’re exacerbated by her situation, because in her village, girls of marriageable age have 3 options: live with her family, get married, or join the Sisterhood. When another tragedy strikes, Mary’s choices are taken away from her and she’s forced to join the Sisterhood, a monastic order of women whose purpose is to promote the Scripture and, Mary soon learns, to protect the villagers from the Unconsecrated by controlling what and how much they know about the secrets of the Forest.

But Mary’s isn’t cut out for Sisterhood. For one thing, she’s not all that obedient. Plus, she feels a growing attraction to her childhood friend Travis, who ends up at the Cathedral after being wounded by the Unconsecrated. But most importantly, throughout her life, Mary’s mother has told her stories about the ocean—a world beyond the Unconsecrated, perhaps a world where they’re no longer a threat. Mary dreams of finding such a place, and as she gains bits and pieces of information that the Sisters try to conceal, she becomes convinced that it does exist and, more than anything, she longs to see it. Mary believes her suspicions are confirmed when she discovers that an outsider is staying at the Cathedral.

As all this is happening, Mary also struggles with her growing love for Travis. He seems to return her feelings, but won’t speak for her. Instead, his brother, Harry, offers for Mary, while Travis keeps his betrothal to Mary’s best friend, Cass. Marriage is the only way out of the Sisterhood so, again, Mary feels as though she’s left with no choice.

Tragedy strikes the village and Mary, Travis, Harry, Cass, Mary’s brother, and her sister-in-law are forced to flee and risk their lives in the Forest. It’s a journey of heartbreak, but also of joy for Mary, who now has a chance to live her dream—if they can just survive long enough. That’s assuming, of course, that there is a way out of the Forest. Not everyone in the group is convinced. And at some point, even Mary must ask herself what she truly wants and what she’s willing to sacrifice in order to get it.

To be honest, I’d be one of the first people to die in the zombie apocalypse, probably. I don’t really get the fascination with zombies, although I’ve seen Shaun of the Dead and that’s about the extent of my appreciation for zombies. (Seriously, I think it’s the zombie apocalypse movie for people who hate zombies.) So a world in which humans survived the apocalypse is fascinating to me; at the same time, I don’t know enough about zombies to really question the worldbuilding too much.

I love the way that Ryan humanises the Unconsecrated and portrays vividly the idea that people have to see their loved ones reduced to zombies and, in some cases, are forced to kill them (again). The book has an extremely high body count.

At first glance, the setting reminded me of The Village, but I think the book explains those similarities reasonably well. The Sisterhood promotes piety to ensure villagers remain obedient to the rules that protect the community from harm, and, unlike The Village, the threat of the Unconsecrated is real. There’s a sense that all the villagers live in a permanent state of trauma.

I loved the way Ryan plays around with the concepts of family, community, love and the individual. The opening chapters vividly depict how, in a world where survival is paramount, the wellbeing of the community trumps all, weakening family ties and subsuming individual desires. Mary is unusual because, although she wants to survive, it’s not enough. She wants more, and she’s willing to take some very big risks in the pursuit of dreams.

Romance in the time of zombies

To clarify: this isn’t a romance. It’s certainly romantic and there’s a love story, but it most definitely doesn’t sit within the romance genre. The love story is thus: Harry is in love with Mary; Mary is in love with Travis; Travis is engaged to Cass; Cass later falls in love with Harry. The love triangle between Mary, Harry and Travis kept me glued to the page in the first half of the book. Some of the scenes between Mary and Travis are just so lovely and so bittersweet. Ryan also conveys a sense of longing and physical desire, amidst the village’s conservative standards, which would put Twilight to shame.

On the seventh day Cass doesn’t come to sit with Travis and I begin to worry that something has happened to her. But then Harry comes in her place and tells me that it has become too much for her to bear, seeing Travis in so much pain.

He does not stay. He does not ask how I am doing or how Travis is doing. Instead, he stands in the doorway to Travis’s room a moment, looking at me as I sit in my chair by the window watching his brother sleep peacefully.

“You love him,” he says to me. I try to find accusation in his voice but I cannot.

“You did not speak for me,” I respond.

His eyes flare for just a moment and then his gaze shifts away from me as he looks out the window. I want him to tell me why. Instead, he says, “I’m sorry, Mary,” and turns and leaves, his eyes skimming over me before he closes the door behind him.

And yet: I couldn’t, for the life of me, figure out if anyone had sex. No, seriously, this was a stumbling block, especially given that the Mary spends a significant amount of time, early in the story, talking about her physical desire for Travis and many of their scenes alone together rely so much on touch. I’m pretty sure sex happens more than once, but I have no idea if or how it affected Mary herself as well as her relationships with Harry, Travis and Cass.

But what frustrated me most about  the story was its lack of depth. For a story with such a lovely lyrical style, Mary’s lack of self-awareness was disappointing. Her insistence on following her dream of seeing the ocean seemingly at the expense of basic survival could’ve been explained better. I think there’s an argument for why, psychologically, she would’ve clung to the possibility of freedom from the Unconsecrated, but I don’t think the narrative draws that out properly.

There are other aspects of the story that I expected to be developed a little more, such as the Sisterhood—particularly since Mary spent a significant amount of time with them. At certain points, we see some deeper nuances in their actions, but for the most part, they remain ambiguous and their motivations remain a mystery. I also didn’t understand the significance of the Fast One other than being a convenient way to move the plot along. Even the love stories unravel in the second half of the book, and Mary’s relationships with Travis, Harry, and her brother, Jed, gradually become less and less compelling when, in fact, those same relationships—their implications and consequences—were part of what drew me into the story in the first place.

The importance of voice

For me, the strongest aspect of the story was its voice. Even when I thought Mary was being an idiot, I was lulled by the narrative and it was just such a pleasure to read the words and soak them up. And later, when problems with the story become more noticeable, my reaction to them was cushioned by the way Ryan’s words just flow. I love words and images and dreams, and this book is filled with them: “Regret eats away at me, stripping through my veins as if to replace my blood…. And I wonder if there was ever a crueler world than this one that forces us to kill the people we love most.” Really, I could just eat that up, never mind that it’s talking about hacking people to death.

Oh, yay for sure. If you don’t like zombies, this book might change your mind. It’s beautifully written and, although it lacks some depth and leaves a couple of its more interesting concepts and plot points unexplored, I couldn’t put it down.

A review copy of this book was generously provided by Hachette Australia. Carrie Ryan was interviewed on The Book Show (ABC Radio National) and you can download the podcast here (contains spoilers).