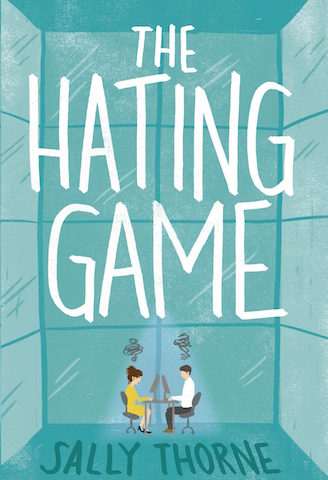 Review of: The Hating Game

An amazing debut that marries chicklit and romance in the very best ways. The hero will melt you. An amazing debut that marries chicklit and romance in the very best ways. The hero will melt you.

The Hating Game got promoted to the top of my TBR pile after I started seeing friends rave about it online (most notably, the lovely @Danielle_Binks). Chicklit is a mixed-bag genre for me, and my first impression of the book was that it was more chicklit than romance.

I WAS SO WRONG.

First of all, I’m an idiot, because the quoted reviews at the front of the book include recommendations from Dear Author, Sarah Maclean, and Kristan Higgins. I don’t know what I was thinking.

Anyway, this book starts off with the I-hate-you-I-love-you premise. Lucy Hutton is the executive assistant to the CEO of a publishing company that recently underwent a merger. She now has to work opposite her nemesis, Joshua Templeton, EA to the co-CEO of the newly formed Bexley & Gamin. The difference in culture between the two publishing houses are embodied by Lucy and Josh — she’s extroverted, determined to please, and generally easygoing; he’s aloof, assertive, and generally terse. And when the story opens, they’re playing a passive-aggressive version of cat-and-mouse, pretending not to notice or care about the other, when the whole day — at least in Lucy’s mind — is structured around how they can one-up the other.

I’m not a fan of workplace hostility in my books. So it’s a credit to Australian author Sally Thorne [ T | F ] that I didn’t immediately dislike Lucy or Josh, although it took me a little while to warm up to Josh as a romantic lead. The one-upmanship is very personal, and Thorne shows in other ways that Lucy is otherwise extremely competent and valued at work. Which I like. It stresses me out to read heroines who are constantly undermined by colleagues, and the Bridget-Jones-ish feel of the opening act concerned me a little:

I compose a reply. It is an emoticon of a smiling poo. It sums everything up.

When the CEOs announce that they’re establishing a COO position, Lucy and Josh are the natural frontrunners. Their rivalry skyrockets, culminating in That Incident In The Elevator. Oh, you know what I’m talking about. And let me tell you, I was happily enjoying this book — the dialogue is clever and fun — and then WHAM! There are hot things happening in the lift! Workplace romance, I am converted!

Needless to say, that’s when I started to appreciate Josh. A lot.

Once the initial setup is established, The Hating Game picks up as a romance. I’ve generally found chicklit to be very in-your-face in terms of character, but Thorne has an exquisite way of weaving subtlety into the story. It helps that the story is told wholly through Lucy’s point of view (first-person), and although she’s an unreliable narrator when it comes to Josh, her observations gain new and more complex meanings when we discover what makes Josh tick.

And Josh. WHAT DO I SAY ABOUT THIS HERO? If you’re the type to adopt book boyfriends, make sure you have room for this hero. Thorne does an AMAZING job redeeming Josh. And not only is he COMPLETELY ADORABLE in a very manly way, he has abs. Lots of abs. BECAUSE HE HAS NOTHING BETTER TO DO THAN GO TO THE GYM.

Look, I don’t care if he’s the anti-MPG hero or whatever else label you want to slap on him. Take your cynicism with you and buy a bottle of vodka. This hero is HOT and SWEET and SEXY and omg he won’t have sex with her because he just wants to sit on the couch, watch E.R. (there’s a story behind that), and hold hands. She’s in his apartment and she would jump him in a heartbeat … and he makes her tea! Because he wants to be sure she’s not just after his super-fit body!

Come on, readers: MELT WITH ME.

In recent years, I’ve become a bit desensitised to eroticism in romance. There’s just so much sex and smut and sexxoring, and yes, sometimes it’s titillating, but at some point, it starts sounding a little clinical. I skip them a lot nowadays. The beauty of The Hating Game is that it’s not very explicit at all, but it is hot and sexy and delicious. That’s a really difficult balance to skate in modern contemporary romance, and Thorne does it so very well.

I manage to take a breath and our slow, sexy slide is cut into a series of broken-up kisses, like gentle bites. He’s testing, and there’s a shyness there too. It feels like I’m being told a secret.

Thorne also has an affinity with colours, to the point where her descriptions are almost jarring (in a purely positive way):

After a few minutes I glance at him, and he is staring at me. Imagine it’s two minutes before the biggest interview of your life, and you look down at your white shirt. Your peacock-blue fountain pen has leaked through your pocket. Your head explodes with an obscenity and your stomach is a spike of panic over the shimmering nerves. You’re an idiot and everything’s ruined. That’s the exact color of Joshua’s eyes when he looks at me.

This attention to colour permeates the book, and is echoed in reflections, and continually hints at the characters’ feelings, although we don’t get the full (and glorious) picture until the end. The pay-off is subtle, beautiful and perfect.

My niggles with this book are few and YMMV. I didn’t like the way that their animosity included reporting each other to HR. That’s a sackable offence in many workplaces, and reflects poorly on their professionalism. It also tends to make coworkers uncomfortable. I also couldn’t figure out where this story is set. At first, I thought New York (because publishing), but Josh makes tea for Lucy, so I thought UK, but they occasionally say things that are just so very Australian (including inappropriate jokes — not many, but bear this in mind if that’s something you’re sensitive to; Smart Bitches talks about this in more detail).  So really, I have no idea. The story still works, but if you like a strong sense of place, you might feel a little adrift.

I’m not yet convinced this book is a keeper for me, but it gets pretty damn close. I think I sped through it, wanting to know how it would end, without fully appreciating the writing and the story. I didn’t properly savour the highs and lows, and I tend to judge romances more on how devastating the lows can be — I like a spectacular pay-off. But I’m keeping it in my shelf for a while so I can reread it in a few months and see if stands the test of time. And honestly? I have a feeling it will.