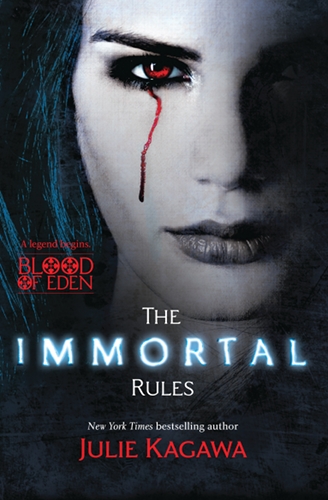 A compelling read, given Julie Kagawa’s brilliant writing and ability to create characters we can sympathise with, but it offers nothing new in terms of the vampire mythos.

Oh how I wanted so badly to LOVE this book! It had all the ingredients of a five-star read—most especially in today’s young adult (YA) market. Post-apocalyptic? Check. Vampires? Check. Did I hear you say, What about zombies? Check that, too (though they’re not named thus in the book, they are pretty much the mindless, walking dead with a one-track mind: to eat you).

Throw in a feisty katana-wielding female lead and a love interest worthy of being swooned at and it should have been a straightforward A+. Ach, but it pains me to admit that it falls short of being mind blowing.

The Immortal Rules begins with a multiple public hanging and continues not to shy away from violence throughout. Julie Kagawa sets the scene within the first few pages and it’s clear that humans are now several rungs down the food chain, living in walled cities run by vampires where breaking curfew could be fatal. Allison ‘Allie’ Sekemoto is a feisty, sarcastic (at times, inappropriately so, but then again she’s a teenager so I guess that’s a given, right?) and apparently illegal book lover. That last one was what won me over but there’s plenty to admire about the disillusioned but steadfast Allie.

Fangs and a serious case of photodermatitis

It’s a very traditional take on vampires but it’s how Kagawa tells the tale that made me flip pages past 1 am. By that I mean more Stoker and Rice than sparkling in the sunlight. I was engrossed by Kagawa’s world building, especially when we realise that Allie doesn’t recognise everyday objects we all take for granted, like a lawnmower or a wheelchair. In her reality the concept of school is bewildering and no one actually has any access or much need for mundane equipment that are relics of our current time.

We’re introduced to many characters along the way and so the list of possible victims is quite extensive (but there are definitely a few idiots you would want dead). Not unlike Suzanne Collins, Kagawa isn’t afraid to sacrifice a few characters and it was awesome. The end.

(As a sort of unrelated side note it was a tad difficult not to giggle at the name of the vampire who sired Allie since translated into my native language (Tagalog), ‘Kanin’ (his name) means ‘rice’. He’s meant to be mysterious and aloof but my mind was saying surely with a name like that he secretly wants to open his own restaurant right? Dish of the day, blood pudding! You understand my dilemma. Moving on…)

Of blood and sacrifice

What I loved best was the subtle romance intertwined with our heroine’s plight in learning to accept what she’s become. There’s no love triangle! HOORAY! It’s already believable. I maintain that it was hard enough to get the attention of one guy, let alone two, as an awkward teen, so triangles always make me suspicious of the heroine. Allie doesn’t wax poetic about Zeke’s masculine allure and superb beauty at first sight—more a casual description of his person. It’s later on, after they spend some quality time trying not to get killed while getting to know one another, that she realises he’s hot stuff.

Lastly, while I don’t judge books solely by their covers (though admittedly it is taken into account) I do notice the covers of my books. Allie is explicitly described as Asian of implied Japanese descent—with her ‘squinty’ eyes, small stature and, most notably, her surname, but to my disappointment, the cover doesn’t portray this at all. She’s gorgeous, that’s for sure but, well, not Asian.

I did only get an uncorrected proof but it had what I assume to be the final official cover (as revealed on Kagawa’s blog and on the HarlequinTeen facebook page.

More often than not authors have nothing to do with how their covers turn out and I may just be nitpicking; nevertheless, it would be nice for the art department to take note of. She really should look a lot like the model on the reprinted versions of Lian Hearn’s Tales of the Otori series (particularly this one).

Despite being a compelling read, there was nothing new here in terms of the vampire mythos and, unfortunately, was somewhat predictable. However, these are small misgivings compared to Kagawa’s brilliant writing and ability to create characters we can sympathise with.

Who might enjoy it: Fans of the vampire and post-apocalyptic genres as well as The Hunger Games, minus the politics and the insufferable faux love triangle

Who might not enjoy it: Those looking for a new take on vampirism (though I’d advise them to stick with it—it’s really Allie’s growth as a character that makes the novel worthwhile)

An uncorrected proof of this book was generously provided by Harlequin Teen.