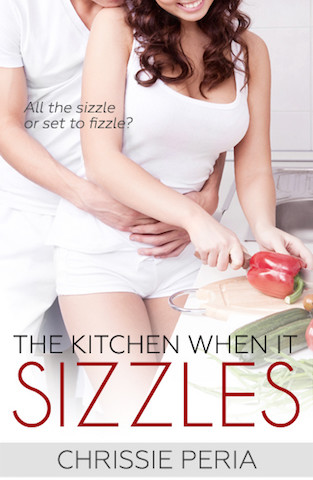 Review of: The Kitchen When It Sizzles

A fun romance for readers who love food...and hot, tattooed heroes who can cook Chinese sticky ribs to die for. A fun romance for readers who love food…and hot, tattooed heroes who can cook Chinese sticky ribs to die for.

A reading copy of this book was generously provided to me as an offshoot of the Backlist Revival Tour. (This isn’t the spotlight title for the month because I requested a romance alternative.)

I’m slowly coming to the conclusion that Filipino romance books written in English and set in the Philippines are a tricky beast for me as a reviewer. They’re often not Filipino enough to feel like the setting matters, and yet that same quality means I’m more likely to recommend it to non-Filipino readers.

The Kitchen When It Sizzles by Chrissie Peria walks this fine line. It doesn’t have the same feeling of cultural immersion that Mina V. Esguerra’s Fairy Tale Fail did. It’s by no means whitewashed, but I also found it more difficult to imagine the characters — especially the hero — as Filipinos. And I can’t decide if that’s a strength or a weakness. I suspect that, as with most things, this will depend on the individual reader.

Workaholic Olivia Nadal signs up for one-on-one cooking lessons with one of the country’s top chefs, but when she arrives for her first lesson, she discovers that up and coming chef Nate Olivarez is subbing in for his aunt.

As Goodreads reviewer Meann put it:

I was only at Loc. 29 on my Kindle when Chrissie Peria decided she was gonna bring out the hot, tattooed, shirtless guy already, and that seemed to be a good indication that this was going to be a good story. ;)

Despite hot, shirtless Nate, I found the start of the story a little draggy. Peria makes up for this by delicious descriptions of food — both the preparation stage and the eating stage. If she comes out with an epilogue featuring Nate’s Chinese sticky ribs recipe, I’d buy it before you can say yum!

I love the way Peria upends the stereotype of the woman stuck in the kitchen, especially in a Philippine-set story. It’s not even that Olivia wants to be an excellent cook to impress other people — she just wants to be competent enough to feed herself well:

“So, this is the basic course, but what cooking experience do you have?” Nate sidled up, handing her an apron before putting one on himself.

“Noodles?” She slipped the apron over head, hiding her embarrassment.

Eventually, Olivia’s worlds collide, and when Nate pretends to be her boyfriend so that a particularly persistent ex would stop pursuing her, it ends in a night of too many mojitos and — you guessed it — vomit on shoes. What I love about Nate is that not only does he ensure that Olivia wakes up to the smell of bacon — a common romance scenario — but he also talks about laundering Olivia’s puke-stained clothing. It’s just enough reality to make the story charming.

Peria has a flair for fun dialogue, and I enjoyed not only this kind of banter between Olivia and Nate:

‘How can you have chocolate chip cookies without nuts?’ Nathan argued, clearly affronted. They had already moved on to doing the dishes, but the debate was still on. ‘You need nuts for the textural contrast. Otherwise, it’ll just be one boring bite.’

‘There is a reason why people get nut allergies. Because our bodies know that it’s not good for us. Look at peanut butter–‘

‘Oh, for all that is holy, you cannot diss peanut butter!’

but the girl-talk between Olivia and her best friend Cheryl:

(I had to google that one!)

One thing leads to another, but Olivia isn’t sure she wants a fling with Nate. She assumes he’s only up for a fling because his star is growing in LA, while her life is anchored in Manila:

The truth was that migrating was never an option for Olivia. She was so deeply entrenched in her life here: her family, her friends, her career, her condo — everyone was so perfectly in place that she couldn’t imagine uprooting herself for whatever reason.

Eventually, though, kitchen countertop sexy times trump potential long-distance relationship, and Olivia’s feelings for Nate become more complicated and less…flingy. She introduces him to her parents, and it’s during these scenes that I truly feel the cultural setting of the story. (Though personally, I would never have been brave enough to risk a midnight visit to a guy’s room under my parents’ roof.)

Unlike many romances where the hero and heroine don’t attempt to talk about their problems, Nate steps up and repeatedly tries to reassure Olivia that there’s nothing to worry about. Peria could have made a stronger case for Olivia’s insecurities because at times her inability to trust Nate is frustrating and difficult to understand. When Nate calls Olivia out on ‘playing games’, I found it much easier to sympathise with him than with her. And that’s despite the fact that Nate never gets his own POV in the book.

The grand gesture that punctuates the romance isn’t the show-stopper I was expecting, but I love that it’s an opportunity for Nate and Olivia to finally lay their cards on the table and talk about their feelings properly. And — spoiler warning — Nate ends up relocating to the Philippines for her. Which made me so happy.

One last note regarding the cover image. Am I the only one bothered by the way the heroine is cutting that capsicum?

You can read an extract via Wattpad. Self-published.