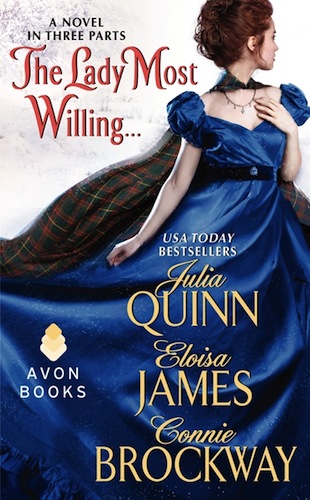 For fans of Julia Quinn, Eloisa James or Connie Brockway. If you’re a first-time reader of their work, however, consider one of their full-length novels instead.

One whiskey-fueled Christmas night, Taran Ferguson of Finovair decides to take matters into his own hands and kidnaps a bunch of women so that his heirs can have heirs and his line doesn’t die out. So Taran and his clansmen hustle over to the Earl of Maycott’s, grab a bunch of heiresses —and, accidentally, a Duke—and take them home, where they will be trapped for a few days since snow has since covered the pass. Taran is hoping that love will blossom between the girls and his two heirs (via his sisters): Byron Wotton, Earl of Oakley and Robin Parles, a French count with no real title. Everyone is both horrified and amused by his crazy antics, and of course, they all fall in love.

There are three interlocked stories in the novel, featuring Byron, Robin and Duke. I would love to give you a summary of each story but part of the fun is finding out whom they end up with, so I will not kill three fairies! Instead, I’ll describe the girls for you and maybe you can guess.

Catriona Burns is the unfortunate local lass who gets sucked into the fun. She’s the daughter of the local squire and never expected to marry anyone but a squire. She’s familiar with Taran Ferguson—everyone in town knows that he’s a bit cuckoo—and has a good head on her shoulders. She is not really worried about being trapped in a castle as she knows all the men are so far above her station that she’s really, really not going to end up with them.

Lady Cecily Maycott appears to be quiet and shy. She’s the daughter of an Earl, the owner of the house they were partying in. Hers is the wealthiest family in the district and they don’t even live there—they just have a house that they visit a few times a year. She’s an heiress and is doted upon by her father. She doesn’t say much, but of course, she is more than what she seems.

Fiona and Marilla Chisholm are half-sisters and both heiresses. Fiona is the elder of the two, and due to a prior scandal, it has been decided that she will never marry, so she remains her sister’s chaperone. She enjoys Jane Austen novels and hanging out in the library. She also wears spectacles and possibly has the patience of a saint. Marilla is the exact opposite of her sister. She has been out a few years but has not had many prospects as, despite her great beauty, there are a few things that can be said for her character. She also enjoys hurling herself at the nearest possible (rich, titled) male.

This story is a fun romp through Regency-ish Scotland and I laughed out loud through it. Having read previous works by these authors, I could tell who wrote which parts—I’ll leave you to guess which ones when you read it. Each of the authors plays to their strengths, and it works well with the personalities of each character and the way they all fall in love. Somehow it doesn’t quite seem like an insta-romance. Although the characters don’t have as much time to grow with each other, their moments of falling in love seemed plausible just the same. I think the lead characters were well matched and the stories all played out well in the end.

Although the stories are set around Christmas, it is not covered with mistletoe everywhere, so to speak, so there’s not too much seasonal stereotyping. I think I will read this again around Christmastime!

If you are a fan of Quinn, James or Brockway, this is a book you will enjoy. However, if you’ve never tried any of the authors before, this is not the place to start. While the book contains a strong set of stories, these authors are better discovered through their full-length novels.

Who might not enjoy it: Readers who prefer longer romantic plot arcs

A review copy of this book was generously provided by Avon.