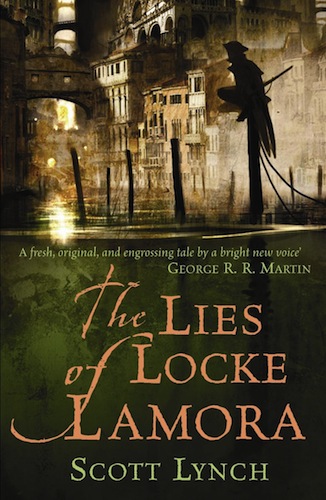 A fresh, original take on the clever thief (and his merry men) of sci-fi/fantasy.

(This book was first recommended to me by the incomparable @AnimeJune via her blog, Gossamer Obsessions. Thank you very much!)

Locke Lamora is the leader of a group of master thieves who run elaborate cons divesting the rich of their money. In the middle of his most complicated con yet, they find themselves caught in between a power struggle between the leader of the city’s underground and the mysterious Grey King.

What can I say about Locke Lamora? He’s my new favorite character. Cheeky, devious, and witty, he reminded me of a younger version of Silk from the Belgariad, or even a grown up Loki from the Journey into Mystery series, or basically any trickster that can think on his feet and get away with anything. He comes from nothing, and with training (shown in flashbacks) and natural cleverness he always finds a way to land on his feet. He’s kind of the underdog that keeps landing up on top, even when you kick him down.

Set in a fantasy version of Renaissance Venice, The Lies of Locke Lamora features a world full of intrigue and complex characters. Locke’s band—the Gentleman Bastards—are a motley crew of people you’d love to have at the dinner table except you wouldn’t trust them with anything, and they might even make off with your silverware.

The setting is lush and captivating, and the adventures (Locke is the champion of multi-taskingscheming!) keeps the pace moving along. Locke’s adventures are interspersed with his origin story, which may put some people off the narrative flow, but I promise it’s worth it.

After months of being in a book slump, this was just what I needed to get out of it. I can’t recommend this book enough. There are two more books in this series, and I am now knee deep into the second one. (Sucked in, again!)

Who might enjoy it: Readers looking for strong characters and original adventures

Who might not enjoy it: Readers who expect a Disney ending (on the other hand, it’s not Game of Thrones either!)