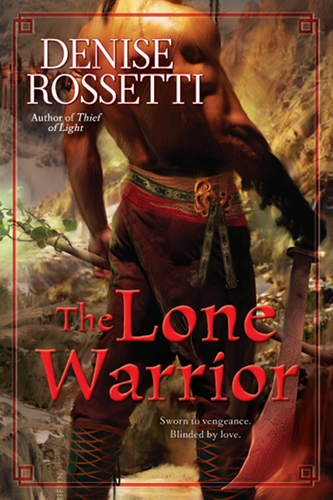 Despite some poignant moments, too many inconsistent elements may prevent you from fully enjoying the story. Best enjoyed as part of the series in which it belongs.

When Mehcredi’s attempt to do the Necromancer’s bidding goes awry, she’s bound to the service of earth shaman Walker. Abandoned as a child, Mehcredi doesn’t know how to be with people, and effectively being trapped into dealing with a bunch of strangers brings old insecurities to the surface.

Mehcredi gradually finds some peace within Walker’s circle of friends, and some measure of self-confidence. When Walker frees her from her bond so he can pursue his quest to avenge his slain kin—he’s the only one left after they were wiped out by demons—Mehcredi insists on coming along, disguised as Walker’s apprentice.

If there was one thing she’d learned at Lonefell, it was the comfort her own bod could give her. The only names she knew for what she did were ugly or childish, or both—frigging, beating off, jerking off. Taso called that soft, sensitive place a cunt, spitting out the word as if it tasted foul in his mouth. But when she lay hunched in some hidey-hole at the keep, cold and miserable and unable to sleep, stroking it helped. The fingers of one hand busy, she’d achieve release, the other first shoved in her mouth to stifle her cries. Afterward, she’d drift off, telling herself it didn’t matter, that at least one person cared enough to gift her with pleasure—even if it was herself.

The external plot starts off promisingly, but towards the end, I was handicapped by not having read the previous books in the Four-sided Pentacle series. The explanations of magic, demons, djinns and technomages aren’t detailed enough to prevent confusion, ultimately causing me to lose a lot of interest in what was going on. I also found some scene transitions off-putting, with sex scenes interrupted by demon scenes.

I suppose what it all comes down to is a lack of consistency throughout the story. This is reflected in the characters, the language, the pace and the mythology. Mehcredi is an assassin, but she’s not really. Walker is the last of his kin, except he’s not. Prue negates magic, except not with Erik. Magic seems all too easy with the good guys, and even at the very end, the consequence of Walker saving Mehcredi’s life—the source of their final conflict—resolves itself in a terribly convenient way. (Mild spoiler alert: I wonder how Walker feels about part of his soul now being just a fashion accessory?)

This book is probably best enjoyed in series order because it seems to rely on worldbuilding done in previous books. I was interested enough in the outcome to keep reading to the end, but despite some poignant moments, there were too many inconsistent elements for me to fully enjoy the story.

Who might not enjoy it: Fantasy readers expecting a deep mythology