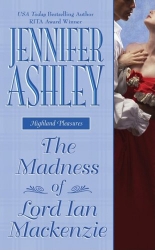 The connection between Beth and Ian led to  squee-like moments that made me smile, in the dark, while fighting off sleep to finish this beautiful book.

Beth Ackerley is a widow who has suddenly, unexpectedly, become an heiress. All she wants to do is sit back and relax with her money, possibly with a new husband. In the process of trying to get a husband, she comes into contact with Lord Ian Mackenzie, the youngest of the Mackenzie brothers, a family notorious for the drama worthy of a modern soap opera. Lord Ian, in particular, is infamous for being “mad” and eccentric, having been previously locked up in a mental asylum for a perceived illness that in modern times would be a disability that can be dealt with. Lord Ian decides that she must be his and sets about it in his own way, and there the story unfolds.

I loved the drama of this story. At first glance, Lord Ian could be any suitor trying to woo a woman—if not for his unconventional bluntness and his trying to prove himself suitable without even knowing that is what he is doing. Both characters have angst-filled backgrounds that Jennifer Ashley uses to show us how their characters have come to be the way they are, and she is able to do it in a way that unfolds slowly and deliberately, without having to say so much. Their backgrounds are interspersed with the story and don’t just come in one big information dump in a chapter or two. This is one of the things I liked most about this novel—you got to know the characters as they were getting to know each other.

I really liked the hero and the heroine. Beth is not a wimp, by far, and she’s not naive, but she has a sense of vulnerability that Ashley shows well. Ian is aggressive, but not calculating, and while he is a bit strange, it doesn’t entirely put you off, whether you can guess his disability or not. His ability to try without knowing he’s trying is his most endearing quality. Their connection felt real and led to quite a few squee-like moments that made me smile, in the dark, while fighting off sleep to finish this beautiful book.

The secondary characters are also excellent. From Ian’s 007-like butler (Side note: I have read so many novels where the butler is, like, kick-arse. Can I get a butler, too?) to his three brothers—who, thank god, will have their own novels, as they all have personalities that bear exploring—and his nephew, who sounds like he will grow up to be equally hawt, Ashley has created a group of characters that you want to barrack for and will keep you wanting more. (Damn, its another series on the auto-buy list.)

There was also a plot involving a murder, possibly connected to Ian or one of his brothers, but to be honest I was too wrapped up in the romantic relationship that I didn’t pay much attention and didn’t even try to guess who the killer was. (Which I usually do every time there’s a murder plot!) I had one little niggle about the “villain” though—he tied up too neatly with the story in the end, making me wonder if he  will play a part in future stories in the series.

Ashley has done an excellent job of taking a conventional love story with unconventional characters and bringing them together. I would highly recommend this book as I was immediately taken from the first chapter, and the characters drew me in and made me fall in love with their story. The only real beef I have with it, I think, is the title. I’m not sure if madness is really the way to go when you’re trying to get someone to read your book—I’m talking to the publisher here, as I know a lot of authors don’t have a say in what the titles of their books are. Perhaps the next book will have a nicer title. I look forward to the next instalment!

AUSTRALIA: Booktopia | Ever After | Fishpond | Intrigue |